The Department of Health and Mental Hygiene falsified official records to show that daycare centers had tested their for lead when they hadn’t, according to an audit released Friday by city Comptroller Scott Stringer.

Supervisors ordered staff to enter into their database that day care centers performed lead tests when no tests were actually performed, allowing the centers to receive permits. The agency, which oversees nearly 2,300 child care centers across the city, did not ensure that the was tested for lead at those day care centers for four years.

“Falsifying records is one of the most serious issues you can find in an audit,” Stringer said. “This is outrageous. Neglecting this lead test is a gamble of health and safety of our kids.”

In 2008, the city began requiring that all day care centers test their for lead, and two years later, even created an internal system where the DOH could not issue a day care permit without a lead test. But when the comptroller’s office began examining records of 119 centers to see if the DOH was enforcing its established requirements for permits, they found that lead test results were missing in 70 of them.

In fact, there was no evidence that the 70 day care centers ever showed that they had completed lead tests. The only time a day care provider would be required to test for lead was if a child showed up with a high level of lead in his or her blood.

Of the 49 centers that completed the tests, five of them—Sunnyside Community Services, Inc. in Queens, Tender Tots 137 Street, LLC. in the Bronx, Lalarukh Qureshi in the Bronx, and both Catholic Charities Neighborhood Services, Inc. sites in Brooklyn—were found to have unacceptable levels of lead.

“By falsely recording that lead tests were complete, the agency was able to bypass its own system requirements to issue permits for day care centers,” the report found. “In doing so, they failed to ensure that lead testing would ever be done at any of these centers.”

The DOH said the lead testing requirement had the unintended result of blocking renewal permits, which prompted them to create the ‘workaround’ of telling staff to enter false information about lead tests into the database. Although the DOH said it stopped this practice in 2012, the audit found that it continued from 2012-2014.

“This is not a risk we should be willing to take, because the health of our children is non-negotiable and should never be compromised for the sake of expediency,” Stringer said.

The city announced yesterday that parents will be able to see lead results for their child’s daycare center on the city’s Child Care Connect website beginning in July. Stringer said that the move came in anticipation of his audit being released today, but parents should not have to wait another day to see the results.

“Every parent of a toddler deserves to know now that their child is being exposed to lead, and that there’s still more work to do,” Stringer said.

Stringer said the audits are being sent to Department of Investigation, who will determine what to do with the employees involved with falsifying records at the DOH.

“At the end of the day the DOH exists to protect the safety of our New Yorkers, including our children,” Stringer said. “And that should not take an audit to ensure that the agency is performing its fundamental responsibility.”

Mayor Bill de Blasio’s office, however, insisted that no children fell ill or were ever even at risk. His team blamed unclear testing guidelines for most of the problems the audit uncovered, and promised that the administration would rectify them—while arguing that many of the comptroller’s assertions were poorly sourced.

“Although a bureaucratic process made testing standards vague beginning 2011, to date, the comptroller’s report notes no child was ever harmed in large part due to the overwhelming rarity of lead-in- illness,” said spokeswoman Aja Worthy-Davis. “Under this administration in June, the Health Department moved to link testing to the permitting process to help protect kids. It is a blatant mischaracterization to claim the agency systematically falsified documents based on a five-year-old email.”

Updated to include comment from the de Blasio administration. 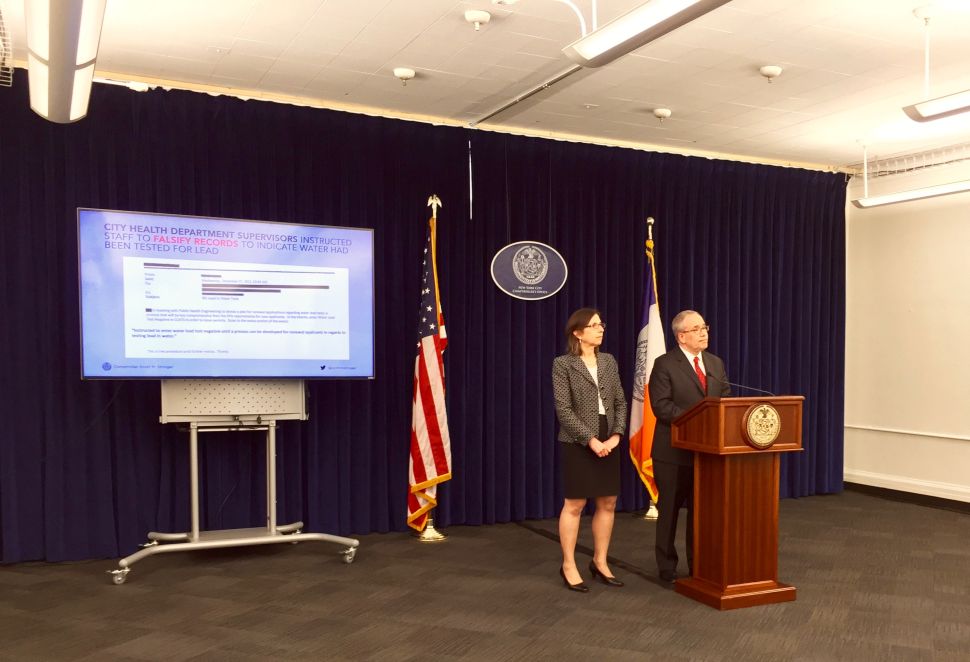