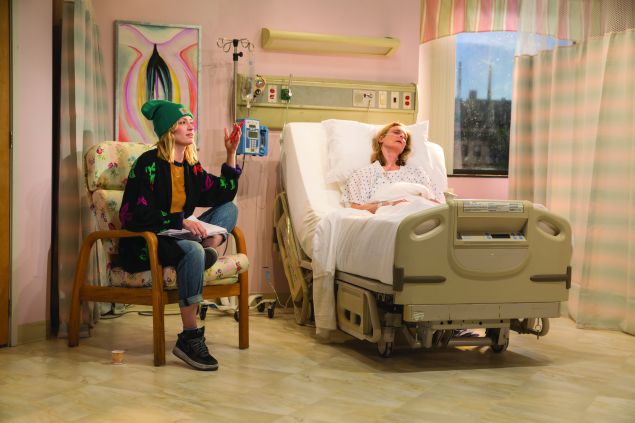 It never ceases to amaze me how much pretentious drivel New York’s nonprofit off-Broadway theater companies dump on their subscribers in any given year. One of the two new examples currently polluting the season: The only slightly funny thing about A Funny Thing Happened on the Way to the Gynecologic Oncology Unit at Memorial Sloan-Kettering Cancer Center of New York City is the title. It’s downhill from there.

The author is Halley Feiffer, actress daughter of famed Jules Feiffer, whose previous play, I’m Gonna Pray for You So Hard, was an autobiographical study of a combustible father-daughter relationship on the cusp of loss and larceny, which I greatly admired. She should have kept this one to herself. A production of the MCC Theater currently playing at the Lucille Lortel on Christopher Street, it stinks like a week-old mackerel. The setting is a double room in the cancer ward where a young woman who is waiting for her mother to die is writing a comedy sketch about rape, wet dreams and her vibrator. She is an obnoxious stand-up comic named Karla, who isn’t remotely amusing, played by a strident, noisy Beth Behrs, who isn’t remotely behr-able. On the other side of the curtain is Don (Erik Lochtefeld), an anally retentive stuffed shirt and licensed loser whose 65-year-old mother is also dying. Don attacks Karla for being loud, disturbing, potty-mouthed and insensitive to the other patients and visitors in the ward, but turns out to be as creepy as she is when he starts reading aloud from a story in The New Yorker about the life of a condom, from the point of view of the condom. What begins as animosity bordering on violence gradually softens when Don gets a text message from his son informing him that the boy has withdrawn $3,000 from his father’s bank account after hacking his dying grandmother’s computer to extract his pin number.

Karla’s mother (a waste of the fine actress Lisa Emery) comes out of her coma long enough to tell everybody off, while Don’s mother (Jacqueline Sydney) just lies there moaning in pain with a shaved head, her face a death mask of grimaces, without speaking. (Talk about a thankless role!) After she dies, Don comes back to the cancer ward and has sex with Karla in his mother’s newly vacated empty bed. Reddi-Wipped with enough forced humor, they learn to share each other’s pain. If this brutality is about anything, I guess the message is simple: Life is ugly and devastatingly bleak, but you can get through it with a few bad jokes. But the point bypasses director Trip Cullman and the four actors, and even with no intermission I promise it feels like an eternity of bad taste.

Next in the queue to oblivion, there’s a heap of festering jabberwocky at the Atlantic Theater Company. (Why do some of these organizations call themselves “theater” and others spell out their name as “theatre”?) Anyway, this horror is the latest shock treatment from Adam Rapp, whose fringe plays often feature an ample supply of nudity, vomiting, sex and diseases of every description, sometimes all at the same time. I still haven’t recovered from his Hallway Trilogy, which sent audiences flying through the exits after a surfeit of throwing up, bleeding and oozing sores. This one is The Purple Lights of Joppa, Illinois, a 90-minute exercise in Grand Guignol which Rapp also ill-advisedly directed. I couldn’t tell you what it’s about, even at gunpoint. An ugly man named Ellis, with a red beard and filthy-looking hair down to his shoulder blades, is visited by a 13-year-old daughter he hasn’t seen since she was 9-months-old. We don’t learn much. Ellis has been in jail for murdering a child he mistakenly identified as an ocelot. Now he’s under the supervision of a parole officer and a mysterious male nurse who invades his reclusive life without warning, armed with hypodermic needles. Ellis has bipolar disorder with a variety of numerous accompanying psychoses and is listed in the police reports as a sex offender. He’s a nervous wreck, plagued by images of ocelots on fire in the limbs of burning trees and thousands of bats in the sky. Sometimes the medications fail, and he can’t make sense of what’s inside his refrigerator. (Not unlike my inability to make sense of an Adam Rapp play.) His daughter hates the Cardinals and suffers from asthma attacks. The production features laser guns and an epileptic fit. It doesn’t contain a lick of coherence. Even the title is mentally unstable. It’s called The Purple Lights of Joppa, Illinois, but the whole thing takes place in Paducah, Ky. If you are foolish enough to invest $50 in a ticket, when it’s over you might be tempted to get your head examined. 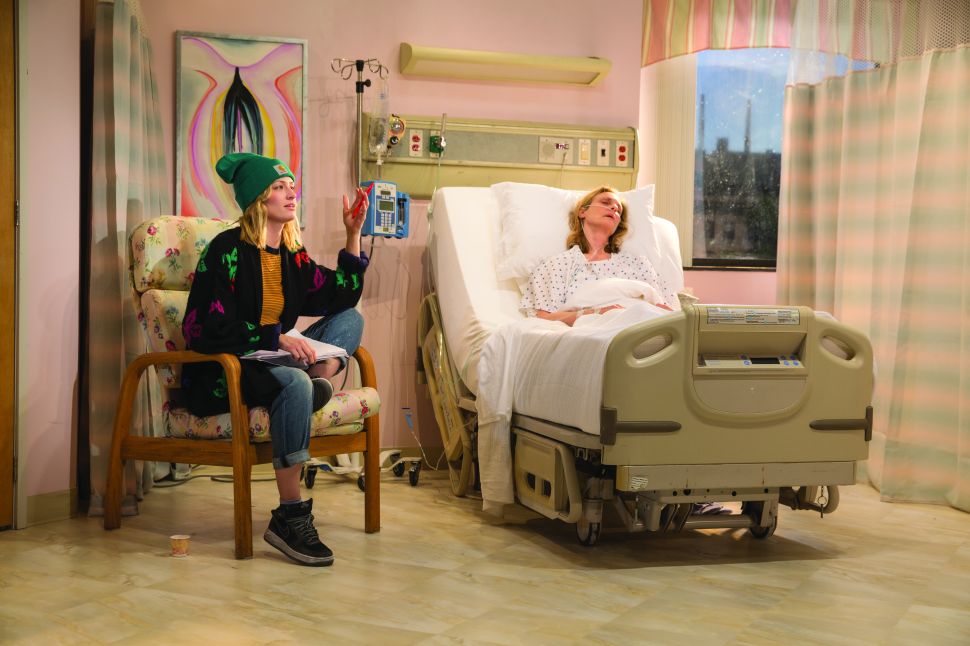