Print may be severely ailing, but more and more brokerages have started producing promotional magazines and newspapers as a way of moving property, despite the high cost of doing so, Crain’s reports. And it’s not only limited to products like Elliman—the Lightstone Group, for instance, publishes the local newsletter-style Gowanus Gorilla.

At least Elliman can afford it: CEO Dottie Herman has made Forbes’ self-made woman list, ranking in at #54 with an estimated $270 million.

As hipsters flee to the Hudson Valley and land prices rise, more and more farmers have opted to sell out—a trend that New York City is trying to reverse by providing funding to keep local produce flowing to the city, according to The New York Times. More specifically, councilman Dan Garodnick has proposed setting aside $50 million to buy development rights from Hudson Valley farms.

Sarah Jessica Parker’s real estate savvy was called into question after she struggled to sell her expensively-renovated West Village townhouse, but at least she got a good deal on her most recent purchase: two adjacent townhouses on W. 11th Street for $34.5 million, or $2,482 per square foot, a discount to the average of $3,412 per square foot paid for a luxury Manhattan townhouse last year, The Real Deal reports.

LaGuardia’s $4 million revamp is finally poised to begin, with a consortium of private partners signing a deal yesterday to redevelop the airport and run it through 2050, taking in return a cut of the profits from vendors, etc., according to Crain’s. “LaGuardia Gateway Partners will begin work on the project this summer, first demolishing a large parking garage in front of the current Central Terminal. The new 1.3 million-square-foot building will rise on that site and feature dual pedestrian bridges spanning active aircraft taxi lanes that connect the terminal to two island concourses.”

How is the real estate industry catering to millennials? Somewhat blindly, it seems from a story in The Real Deal that identifies unsurprising trends like bike rooms and USB charging stations, as well as more eyebrow-raising attempts to capture the zeitgeist like communal kitchens with an in-resident professional chef to help the well-heeled and hapless. Part of the problem, of course, is that millennials range from 18 to 34 and mired in student loan debt to multi-millionaires.

A public pool is no place for sex segregation, opines The New York Times‘ editorial board,  weighing in on the parks department’s decision to continue women-only hours catering to the Orthodox community at the Bedford Avenue pool despite the fact that they violate the city’s human rights law. “Let those who cannot abide public, secular rules at a public, secular pool find their own private place to swim when and with whom they see fit.”

Finally, if you’ve ever wondered what that villa overlooking Spuyten Duyvil was, Curbed has the answer: romantic co-op idyll, Villa Charlotte Bronte, where stunning views of the Hudson and exterior entrances to all 17 apartments make for picturesque if somewhat awkward arrangements. 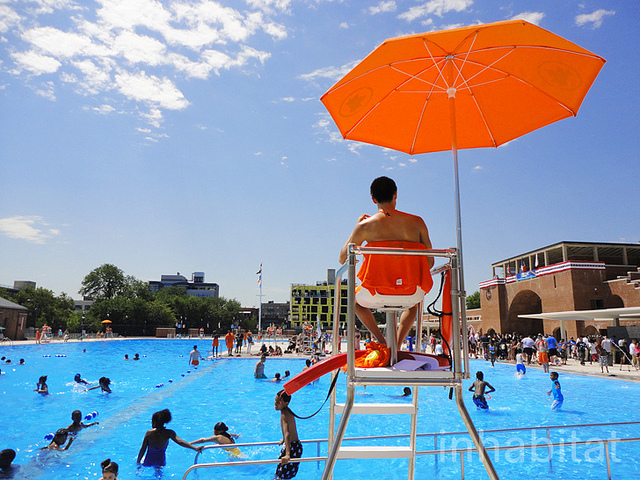