Every weekday at noon on Fox News Channel, they show a program called Outnumbered in which four women in short skirts and high heels talk with one man forced to wear a suit with long pants.

On Thursday, the shortest, reddest skirt was worn by Jedediah Bila, a Manhattan conservative author who discussed the campaign for president between Donald Trump of the Republicans and Hillary Clinton of the Democrats.

Indeed, this very day included TV coverage of President Barack Obama’s surprise endorsement of Clinton and Bernie Sanders’s hint that he, too, will support her.

There were sunshiny scenes of Sanders visiting the White House and, later, dropping in on Capitol Hill to see top Democrats like Senate Minority Leader Harry Reid.

There were bustling scenes outside the Four Seasons restaurant of Trump arriving to talk with reluctant donors frightened by his crude, rude campaign.

There were video and sound clips of elected Republicans backing away verbally from Trump because of his alleged racism.

After accidentally showing the same segment twice, Fox cut off the mistaken replay with Laura Ingraham in mid-sentence.

So it is a pity Bila wasn’t around all day to tell her Fox News producers what to show.

While MSNBC and CNN followed the story that expanded from early morning through late night, Fox virtually ignored it, especially during prime time, which ended with an embarrassing technical screw-up that made the Hannity show with Sean Hannity even more inane than it usually is.

After accidentally showing the same segment twice, Fox cut off the mistaken replay with Laura Ingraham in mid-sentence.

“If Trump wins—” she said, just as the recording was stopped and replaced, awkwardly, with a commercial for Cialis, one of those erection pills for men of a certain age. Later, a different segment was interrupted by a test pattern and a harried newscaster stepping in to fill time.

Before that, during The O’Reilly Factor and The Kelly File, hosts Bill O’Reilly and Megyn Kelly spent much of their time discussing Clinton’s email “scandal” and how poorly she is doing in the Fox polls and what about that school the Clintons were involved in, huh?

There were non-election stories of the rape case at Stanford and of gun rights in danger from a judicial ruling. The network was littered with footage of violence at a Trump rally last week, scenes which have been in heavy rotation on Fox for several days.

But at least one Fox man got things right. During Special Report in the 6 p.m. hour, commentator Charles Krauthammer took the long view of the day’s Democratic drama.

“A carefully orchestrated rollout of the come-down,” he said, specifically referring to Mr. Sanders. “This is not the helter-skelter, running for the exits that happened on the GOP side.”

Then came Warren, who delivered a blazing attack during the 7 p.m. hour while speaking to the American Constitution Society in Washington.

She spoke of Trump’s attacks on U.S. District Judge Gonzalo Curiel, who is hearing a lawsuit against Trump involving former students of Trump University, a real estate seminar.

They accuse him of fraud. Trump has denied it—and more.

Last week, Trump said that the judge—“Mexican, we think”—is prejudiced against Trump because Trump wants to build a wall on the Mexican border and deport 11 million undocumented residents.

Trump, Warren said, has a “disgusting theory that Trump’s own bigotry compromises the judge’s neutrality.”

Calling Trump “a thin-skinned, racist bully,” Warren added, “Donald Trump says Judge Curiel should be ashamed of himself. No, Donald. You should be ashamed of yourself. Ashamed for using the megaphone of a presidential campaign to attack a judge’s character simply because you think you have some God-given right to steal people’s money and get away with it. You shame yourself, and you shame this great country.”

MSNBC showed much of this speech and CNN showed some of it. Only Fox mostly ignored it. This was odd in that Fox generally loves stories of brave lawmen, and Warren noted that the judge has risked his life in cases involving drug dealers who threatened him.

“Race-baiting a judge,” Warren continued. “You, Donald Trump, are a total disgrace…a loud, nasty, thin-skinned fraud who has never risked anything for anyone and who serves no one but himself. That’s one of many reasons he will never be the president of the United States.”

Warren chose to endorse Clinton on The Rachel Maddow show on MSNBC, and Maddow scooted from New York to Washington. She was still wearing jeans, she said, lifting her leg to show Warren.

Surprisingly, none of the networks, including Fox, could find Republicans willing to fight back on behalf of Trump or even say nice things. Not even Trump spoke about Trump.

Even in the worst of times, Trump often retreats to the safe house of Hannity, who asks easy questions and rewards canned answers with a smarmy smile and a mirthless “Ha-ha-ha-ha-ha.” The night before, Hannity used leftovers from his most recent exclusive interview with Trump and also interviewed Donald Trump Jr.

But Thursday, Trump was missing in TV action, and few on Fox seemed to have a clue about the real story: the Democratic offensive against Trump. They did better on CNN where guest David Gregory (who can mix metaphors with the best of ‘em) said, “This was a picture of a Democratic Party firing on all cylinders here with Elizabeth Warren at the tip of the spear.”

On CNN, Rep. Peter King, R-N.Y., told Wolf Blitzer that Mr. Trump “needs to clean up his act.” On the same network, Rep. Luke Messer, R-Indiana, said, “The question is Can folks put on a Donald Trump T-shirt? and the reality is it’s hard to do that given the current rhetoric.”

Another rough comment made Fox’s Cavuto show (Neil Cavuto was not working). It came from Rep. Duncan Hunter, R.-Calif.

“A lot of people that were going to get on board, that were reluctant to, are now backing away even more,” he said. “Every time they get close to supporting him, he does something that upsets them…they don’t like what he says.”

On MSNBC, Kelly O’Donnell reported that Gov. Chris Christie, R.-N.J., had told the donor meeting that it was time for Sen. Lindsey Graham, R.-S.C., “to shut up.” Graham has expressed horror at Trump’s candidacy.

The day before on MSNBC, Republican Sen. Susan Collins of Maine had told Chuck Todd on MTP Daily that she can’t commit yet to voting for Trump because she was “offended and appalled” and “deeply disturbed” by his recent remarks.

That story seemed to grow Thursday until Ted Cruz aide Amanda Carpenter said on CNN that she’d heard Collins was willing to vote for Clinton.

Republican Speaker of the House Paul Ryan was quoted several times on CNN and MSNBC as saying Mr. Trump’s racial comments were wrong.

Hannity disapproved of Ryan, especially after Ingraham said many Republicans have more in common with Clinton than they do with Trump and that they secretly want Clinton to win.

“Isn’t this open sabotage on his part?” Hannity said of Ryan.

They didn’t care to talk about the emergency Republican summit being held in Utah. Ryan will attend the event hosted by Mitt Romney, the 2012 candidate who is strongly opposed to Trump.

Perhaps the harshest conservative comment came on CNN from Hugh Hewitt, a radio talk show host, who entertained the possibility of a mutiny at the Republican convention against Trump.

If he loses badly to Clinton, the House and Senate could shift from majorities of Republicans to Democrats.

“It’s like ignoring stage four cancer,” Hewitt said of Trump. “You can’t do it. You’ve got to go attack it…The plane is heading toward the mountain…I want to support the nominee of the party, but I think the party ought to change the nominee because we’re going to get killed with this nominee.” 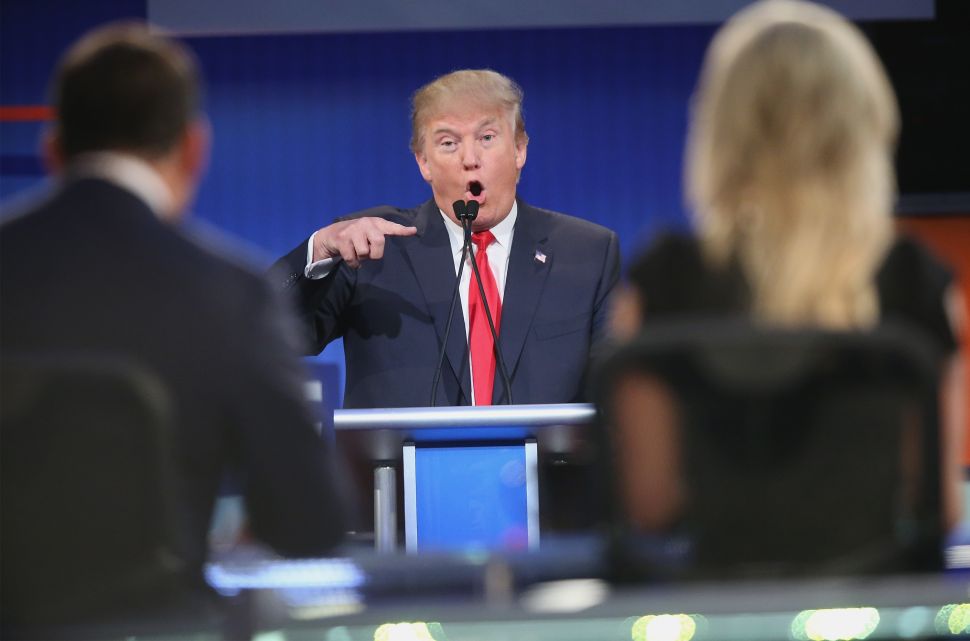