If you were worried that Orange is the New Black would run out of momentum in its fourth season, well… put those fears to rest. Season Four of OITNB is a glorious return to form: a pitch-perfect mix of comedy and drama astonishing in just how real it all feels.

I was hooked from Season One because the show gave weight to the mundane daily torture of being in prison — crabby bunkmates, needing sandals in the shower, disorganized leadership — that another show might have glossed over in favor of dramatic moments that make people gasp. But what OITNB does better than any other show on television now is giving us those gasp-worthy moments, and making them all the more gasp-worthy because they’re interrupt the mundane at unexpected moments. There are only so many deaths by broadsword Game of Thrones can give us before it starts to lose its edge.

Season Four begins right where the last season left off, perfect for those of you that prefer binges to be multi-season affairs. To recap: the prisoners all escaped through a hole in the wire fence to play in the lake near the prison, made all the easier by a walkout of the underpaid guards; Vause is getting strangled by a guard who was actually a hit-man hired by the drug lord she testified against; Piper turned on her former-paramour Stella who stole all the money from her panty-selling business (Trust No Bitch) and now she’s feeling like a Bo$$; and a domestic celebrity a la Martha Stewart named Judy King just arrived at the gates.

Caputo, now the warden, is in over his head. There’s been an influx of new prisoners meaning there’s about to be some massive overcrowding, he needs to make sure treatment of Judy King isn’t too harsh, and, y’know, all of his prisoners just escaped through a hole in the fence, which is adorably pantomimed by the guard who looks like Ben Platt. Caputo manages to get everyone back inside, with the help of some less-bumbling guards from Max in riot gear, including one bearded lumberjack-type who should be wearing a t-shirt that says WATCH ME I’M GOING TO BE A VILLAIN.

Vause only escapes her near-death experience with the help of Lolly, a paranoid inmate who thought the hit-man was spying on her for the NSA. She kills him, and this sets into motion what will be one of the most gruesome sequence I can remember on OITNB: Vause and Lolly hide the body under a tarp (texting his boss from his phone that he succeeded in his killing mission. The boss asked for a pic of the corpse’s boobs.) When Vause returns in the middle of the night, she sees that the man is alive, just barely, and quietly asking for help. She smothers him with a handful of toilet paper. This is the scene that should be on Laura Prepon’s For Your Consideration Emmy reel: the anguish and fear on her face will make your heart sink.

Then onto the burial. On the advice from another inmate who’s probably murdered a few people in her time (“Why dig one six-foot hole when you can dig six one-foot holes?”), Vause and Lolly cut the body into six pieces with gardening sheers and bury them in the garden. 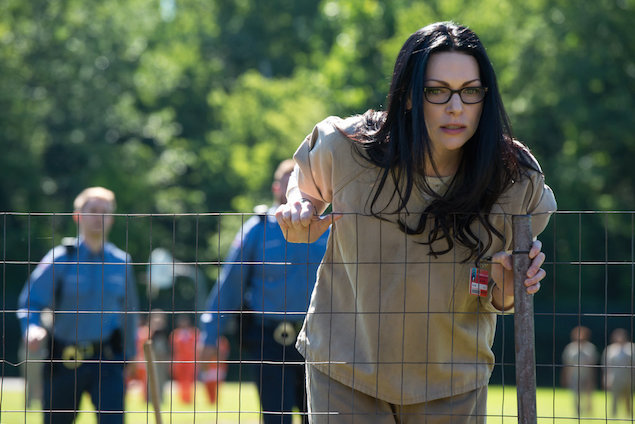