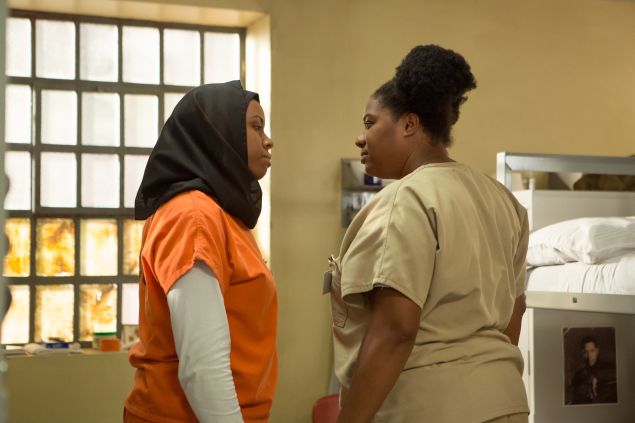 It all ended with a taste of freedom. The guards had left their posts and the inmates had discovered a way out.

As season three of Orange is the New Black concluded, a large conglomerate of inmates, Poussey, Taystee, Morello and Crazy Eyes, among others, frolicked in a huge body of located just outside the prison’s fence. For a moment it seemed as though all the drama was over.

But in reality, that escape, those moments of bliss, end up being extremely short-lived.

When the inmates are rounded up and moved back through that fence, it’s as though they’re passing back through a metaphorical tunnel of enormous change. What actually happens after that short physical journey makes for some darn good drama.

In fact, the themes of season four of OITNB seem to be identity, race, and just plain continued chaos. All of which make for a dizzying cocktail of welcome confusion.

For the uninitiated, Orange is the New Black is based on Piper Kerman’s 2010 memoir detailing the 15 months she spent in prison for money laundering and drug trafficking. While Kerman’s journey was the initial entry into this story, that character, although important to the through-line of the series, has never been the main focus of the narrative, wisely allowing for in-depth storytelling featuring the multitude of other individuals who populate the prison.

In an extremely truthful representation of prison life, and really life in general, the prison (Litchfield) houses a cast of characters who are incredibly unique, each in their own fascinating way. And, the forced togetherness of these women makes for some incredibly interesting relationships and internal strife, which is really the heart of the series.

“Each season we peel back layers of what’s going on in the prison, and what unfolds really changes quickly from moment to moment,” explains Adrienne C. Moore who plays “Black Cindy” in the series. (Nicknamed as such because there is a ‘White Cindy’ in the facility as well.)

She goes on to divulge more about what the inmates will face this season, saying, “A big part of this year is about the privatization of the prison. This leads to some intense exchanges about overcrowding, civil liberties, racism and things that fall under the umbrella of those topics.”

Moore says that behind-the-scenes the exploration of these issues fueled a lot of conversations and caused some very emotionally intense moments in the making of these episodes. “We talked a lot about what happens when the minority becomes majority and vice-versa and how that affects the dynamic of the whole group. We really examine the question of, ‘how do you move through certain times when there is blatant racism happening right in front of you?’”

Last season Black Cindy went through a personal big change in that she converted to Judaism, taking the new name Tova, and Moore says that this evolution will continue to play out this season. “Well, first we get to see how her conversation affects the way she interacts with the new inmates, especially her new cellmate, who is Muslim.”

Moore admits that last season her personal life unexpectedly mirrored her on-screen character’s life a bit, revealing, “When Black Cindy was converting, I was going through a religious journey of my own at that time so it was interesting to me to have my character experiencing something that was so personal to me as well.”

Talking more about Black Cindy’s journey this season, Moore says, “Well, we’ve established that she has a ‘carpe diem’ perspective on life and she’s always looking for a scheme to get ahead, but now that she’s Jewish and she thinks a bit more about what doing the work of God means, she struggles a bit. Her feelings make for a very interesting internal battle for her. She embraces her new outlook on faith at times and she struggles with it at other times.”

Moore also talked a little about Litchfield’s newest inmate. “Judy King is this celebrity that comes in and she strikes up a very interesting relationship with a lot of people, including Black Cindy. It will be interesting to see what fans think about those relationships. And, I think it’s important to say that Blair Brown (who plays Judy) and I had an amazing time working together, as she did with everyone, and I think you can really see that in the way things play out onscreen.”

Emphasizing that this season is truly a game-changer, Moore goes on to say, “Really, every time I got a script, I was like, ‘Oh my God, I can’t believe we’re doing this!’ I can’t tell you how many times my jaw just dropped when I was reading scripts. So I think people will be surprised and emotional and all that when they watch.”

When pressed for details, Moore would only say, “When I tell you this season is shocking, I think that’s an understatement. I promise it will shock you into anger at some times and shock you into tears at other times. Get ready ‘cause it’s a real emotional ride.”

As the first show on Netflix to break through, there’s certainly pressure on those at OITNB to keep viewers continual satisfied, something that can be quite difficult. About achieving this level, Moore explains, “One of the first things I worked on was 30 Rock and I asked Tina Fey what the secret was to the success of that show. She told me that you have to kind of take what works and focus on that, which is really like the thinking of ‘if it’s not broken, don’t fix it.’ So at OITNB we really work to keep to the formula that’s made this show so popular with everyone who watches it, which is to have really good characters and really interesting stories. I know that these women are in prison, but when you see their backstories and their relationships, there’s something in them that everyone can relate to and that’s key.”

Moore relates one more piece of advice that Fey gave her, saying, “She said to remember that the goal of making a show is to entertain people. So that’s what we’re doing – we’re working hard to really entertain you. And, I think above all else, you’ll be thoroughly entertained with our show this season.”

All 13 episodes of season four of Orange is the New Black are available for streaming June 17 on Netflix. 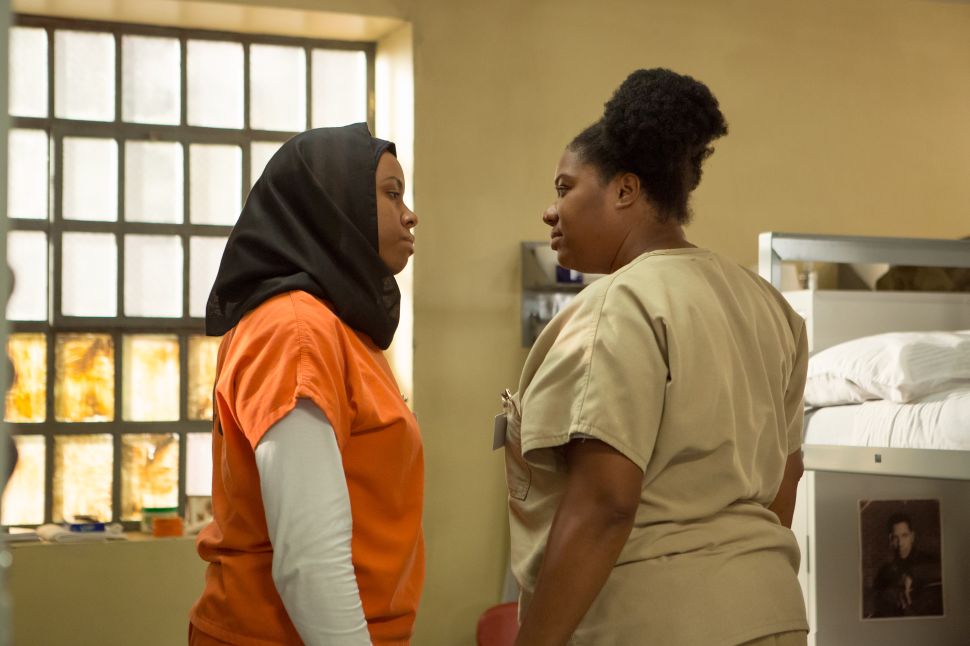 Filed Under: TV, Netflix, Orange is the New Black