It’s “press conference day” on Orphan Black. Meaning Evie Cho is about to announce that government approvals have come through for her innovative new worm-robot technology that promises to cure the world of genetic diseases. And in a public-relations coup, she’s making the announcement in her economically depressed hometown, Tisdale, where she will be building a new facility that will provide lots of jobs. A great day for science and progress!

Of course, the Leda sisters know the truth: Far from a benevolent savior, Evie’s a ruthless sociopath. Her so-called gene therapy is actually a Trojan horse she intends to upload into the human genome, allowing her and Neolution to literally edit the evolution of the human race in any way they see fit. Once those worms are in everyone’s cheeks, they get to start playing god, rewriting the code of all human existence.

Good thing for us that desperate times make for strange bedfellows—both literally and figuratively. So while Leda eggs and Castor sperm are being combined somewhere on a remote island, former enemies Sarah and Rachel, have teamed up, along with Art and Ira, to figure out how to bring Evie down.

Lucky for them, two of the foster mothers from Brightborn’s baby farm have just run away. Even more luckily, they brought with them a video of doctors euthanizing a severely deformed Brightborn newborn.

Crazy how all this is happening right as everything is coming to a head, right? I mean, Brightborn has presumably been birthing and offing deformed babies for at least a year now. Since before Beth died, at least. Any of these destitute foster moms could have realized that Brightborn was basically a baby-murder factory and gone AWOL pretty much any time before now. It’s awfully made-for-TV convenient they chose right now, when Sarah & co. needed them most, to do a runner.

Or maybe not: Maybe there have been plenty more mothers who took off over the course of the project, and Neolution just used its dirty cops and Finnish ambulance-driver assassins to quietly kill them. That would make sense—though it does reveal just how vulnerable Evie Cho’s whole enterprise is. This episode makes it look so clever of Rachel when she figures out how to discredit Evie. But Evie is the extremely public face of a company doing extremely illegal and unsavory things—nobody likes a baby murderer—things that hundreds of people, doctors, nurses, foster moms, etc., know about. The way to take her down seems pretty straightforward: Get someone to talk on the record and show the media what an evil baby-killing liar Evie is. It’s no wonder Neolution is scrambling around and murdering folks all the time. They’ve got this pretty huge PR problem constantly knocking at their door, and meanwhile their leader really likes to see herself on TV.

And so it is that when Art and Sarah track down the two runaway women, one of them has fled with her blind Brightborn baby and the other has “committed suicide.” Trina Magnetfingers, who keeps popping up for some reason, is on the scene to point them in the direction of a house in, where else, Tisdale, because apparently there is only one poor suburb in the greater Toronto area.

But she also pointed some dirty Neolution cops in the same direction. So after Art and Sarah find the terrified woman, Kendra, and sort of half convince her to come with them, the female half of the Finnish ambulance driver duo (oh but where could her partner be?) storms in. Art and Beth subdue her, but in the confusion Kendra runs off…with Ira.

Because Rachel has her own plan that involves threatening Kendra’s kid to make her to come with her, instead of, you know, asking nicely. Trapping Kendra in her hotel room, Rachel takes the baby-murder video and goes to confront Evie right before her big press conference. To all appearances, she’s going to double-cross Sarah & co., trading Kendra and the video to get her leadership role in Neolution back.

But actually it’s all a ruse to bring Evie down for good. And see, unlike last week’s silly Alison debacle, this is how you do a fake betrayal sequence. Because it totally seems like Rachel is going to go through with it. She’s already shown herself to be focused on power above all else, we know that she hates Sarah, and she is actually putting into effect a plan she made behind Sarah’s back, even though they’re now ostensibly on the same side. Of course she’s doing it because Sarah wouldn’t blackmail and kidnap a pregnant woman, but it really looks like Rachel’s just gunning for her old seat at Neolution.

Actually, what she’s doing is drawing Evie out, getting her to admit that she is farming and then killing deformed babies. And when the two videos are sent to media outlets, well, let’s just say Evie’s press conference doesn’t go quite as planned.

Our heroes win, for once! (For now! There’s still one more episode left this season for everything to go to shit!)

As for the other clones, Cosima is hanging out on the Island of Doctor Moreau (no joke, the show seems to have simply decided that’s just what they’re calling it now) with Susan Duncan, as they try to get stem cells from the Leda-Castor zygote. Meanwhile they debate the history and ethics of Neolution, with poor little Charlotte as the object lesson.

Alison is still having her annoying crisis of faith, which seems to intensify now that Donnie is out of jail. She thinks god is punishing her by having everyone openly gossip about her and her drug dealing ways—but of course that’s not god, that’s just suburbia. She decides they need to get out of town, but before they can go anywhere, the other Finnish ambulance driver shows up to try to torture the location of Detective Duko out of them.

Of course, Mrs. S (conspicuously absent from this episode) murdered Duko, a fact that Ali very nearly spilled to Felix’s bio-sister earlier in the episode. But that turns out to actually have been a good thing. Because guess what: Helena’s back! She’s apparently been living this whole time in a shack she built herself in the woods, dressed in the skins of animals she presumably killed herself, and just really looking for all the world like the savage she is, in the most amazing possible way.

She shows up, pregnant and feral, at Felix’s apartment, and Adele, her suspicions already heightened, just has a total meltdown. So wait, now Sarah’s suddenly not a twin but a triplet? Except one of her triplets is inexplicably Russian? Oh and also even though she’s been off somewhere this whole time wearing a dead fox as a hat, this Russian triplet also happens to know all about the Portuguese drug dealer murders? The case where a police detective seems to be mysteriously missing? Nope nope nope.

Felix decides to “protect” Adele from the truth and sends her off. But Helena, no dummy, puts a couple of her ranting statements together and realizes something is totally about to go down at the Hendrix household. So she shows up just as Big Finn is about to insert a janky first-generation mouthworm into Alison, and shoots him completely awesomely through the neck with a bow and arrow.

And then there’s Rachel. Even though she’s been flawlessly executing her anti-Evie plot, the proclone has also been dealing with her own problems, namely the fact that someone is still hacking her robotic eye. Now the images Rachel’s seeing have resolved themselves into whole scenes, in which she seems to be seeing out of someone else’s eyes as they walk around some weird militia camp in the woods. Someone murders a swan with an axe, which is clearly symbolic—the show keeps reminding us via the frontispiece of an old book that Leda was impregnated by a swan—but it’s not clear what it’s supposed to mean, or why these armed men hanging out in the forest and killing majestic birds are important.

But it is also heavily implied that the person sending these images to Rachel’s eye is none other than Delphine Cormier, who is, of course, still alive. And looking quite well, all things considered. 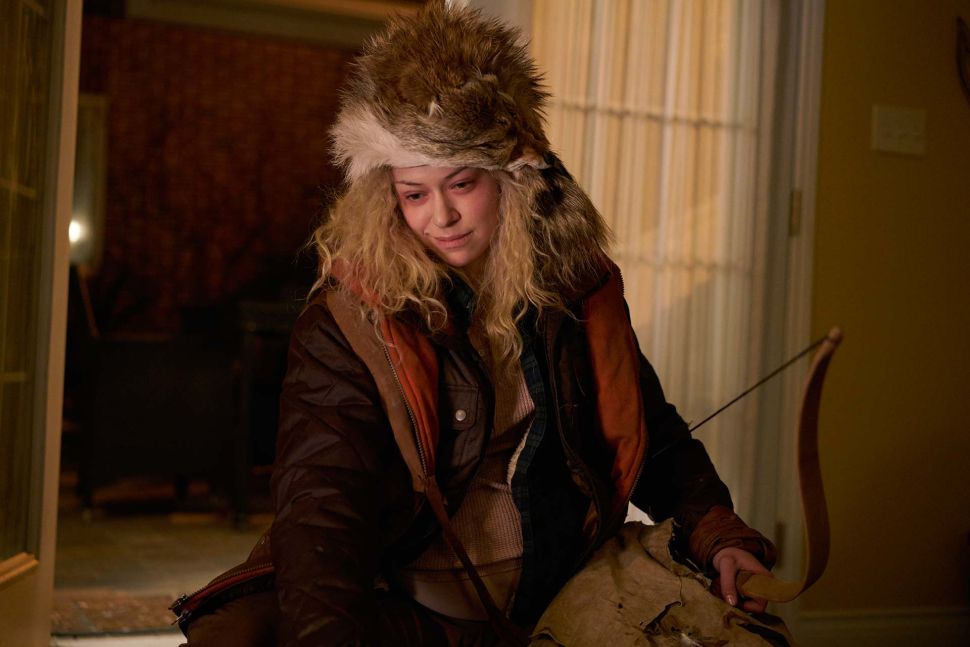