Welp, they can’t all be winners. I make no secret of the fact that I love this show, but some episodes do come across as totally clunky.

Still, it’s pretty amazing that an episode in which one character is tortured and then shot and another is nearly shanked in prison can feel like it’s just sort of clearing its throat for whatever is about to come next. Orphan Black’s generally so thrilling and tightly paced that the action of this episode couldn’t really save it from its dull plotting, as it dutifully moved its characters around to where they presumably need to be to take the season into its home stretch.

But let’s start with the good: Alison was actually part of the main plot of the show for once! Far too often over the last seasons she’s been off doing her own thing—whether as comic relief, suburban melodrama, or both—while her other sisters dealt with the real threats to their survival. But now that she’s the only real leverage dirty Detective Duko has to get Sarah out of hiding so that Evie Cho can begin her extermination of the clones, suddenly she and Donnie are at the center of events.

Neolution has placed a killer in the prison where Donnie is being held pending his bail hearing on (totally justified) drug trafficking charges. And Duko tells Ali that unless she gives up Sarah’s location, her husband’s going to get a shiv in the eye. Instead of going straight to Sarah like she should, Ali, in a pair of totally unnecessary scenes, asks her priest for advice. (The whole character of the priest is unnecessary here, really, and he’s been given far too much screen time in these last two episodes, making me suspect that maybe he’s also a secret Neolutionist plant or something?) Based on his counsel, she appears to decide to betray her sisters to save her husband.

And this is where the whole scenario goes off the rails. The “make the audience think a character is double-crossing her friends, but really it’s a triple cross and she’s been on our side all along” thing is a pretty tired trope by now. So if you’re going to trot it out, at least do it well.

Instead, when Felix comes by to suss out whether Ali is going to crack, she lies to his face about Duko, clearly signaling her decision to betray. While they’re talking, Duko texts her that he’s at the church, ready for her to talk. Then, the next time we see her, she’s spilling her guts to him about where Sarah will be. But this turns out to be part of a plot by the sisters to catch Duko and torture him to find out Evie Cho’s plans. So wait: You’re telling me that sometime between Duko texting her and her going to meet him, Ali had a complete change of heart, told all of the details to Felix, and they, Mrs. S and Art formulated a plan, all while Duko waited for her in the chapel? Maybe—but it certainly doesn’t make the twist feel natural or plausible when it comes.

Almost everything that should have been great about “The Redesign of Natural Objects” is similarly derailed by poor plotting. It’s awesome to see Mrs. S in hardcore mode again; she’s supposed to be this revolutionary Irish badass, but most of the time she’s really been just moping around or sternly admonishing people. Now that her mother’s been killed, though, she’s taking the law into her own hands, loading her gun and going after Duko.

But then spooky tattletale Kira tells Sarah about the gun, and she and Art go looking for Mrs. S, desperate to stop her from doing “something stupid.” So then later, after they successfully trap Duko at the comic book store, why do they just go ahead let her do that same stupid thing? They could have gotten the information out of him and then sent him to jail for life, being that M.K. has dug up his offshore accounts. Instead, after panicking that S was going to kill Duko, they just…let her kill Duko?

Oh yeah, M.K. is back. She’s gotten in touch, we learn, because she’s come down with the clone cough. But really she’s back because the story needed a way to put the sisters clandestinely in touch with Susan and Rachel, and it had a convenient hacker character handy.

Now that they have a common enemy, Susan and Cosima decide to collaborate on a cure for the clones’ illness (over the protests of Scott, who wants nothing to do with Rachel and her backstabby ways). Putting their big brains together, they come up with a possible solution: Kendall may be dead, but her genetics live on in the two sets of clones. So if they put them together—i.e. fertilize one of Sarah’s eggs with a Castor clone’s sperm—they will be able to harvest stem cells. So Cosima is off to the island of Doctor Moreau to go play mad scientist and make incest embryos.

And hoo-boy does this solution make no sense. First off, exactly two episodes ago, everyone made a huge deal out of the fact that they were giving only the female side of Kendall’s DNA to Neolution, and they all seemed sure that they could use just this material to come up with a cure. So why would they suddenly need Castor DNA now?

Even if there’s something I’m missing here (I’m no geneticist), are you really telling me that the solution all along has been to get two clones to have a baby together? And they only thought of this just now? Susan is supposed to be one of the smartest people alive, and she has been working on this problem for over a decade. She never once thought of this extremely simple, logical solution? Granted, the Leda clones are supposed to be infertile, but as soon as Sarah broke onto the scene, creepy daughter in tow, she should have been like, now we have our cure! Rather than running all over the globe looking for Kendall? If this is really the answer, these very smart people should all be kicking themselves, rather than celebrating their genius.

Rachel is still hallucinating in her bionic eye. Now, in addition to the swan, she’s seeing a creepy man.

And finally, we get to see Alison’s great love of musicals in action, as she runs through a rehearsal for her revue of Jesus Christ, Superstar with the truly amazing Sarah Stubbs. Scenes from the musical are juxtaposed with scenes of Donnie getting roughed up in prison as the Neolutionist assassin waits for word from Duko. This is the kind of set piece Orphan Black does so well, as we see Ali grow more and more flustered, less and less sure of her steps and her voice, as she waits for Felix to signal her that Donnie is OK. And when he finally does, she starts belting out her lines like nobody’s business, and ending her song with a little silent prayer of thanks. It’s pretty sweet.

But the juxtaposition itself is sort of confusing, thematically. Is Donnie supposed to be Jesus here, sacrificing himself for the sins of the clone sisters? Are we supposed to be associating Ali with Judas somehow (even though her betrayal was no betrayal at all)? It’s a great sequence, but just like the whole episode, in the end it just doesn’t seem to give us very much to work with. 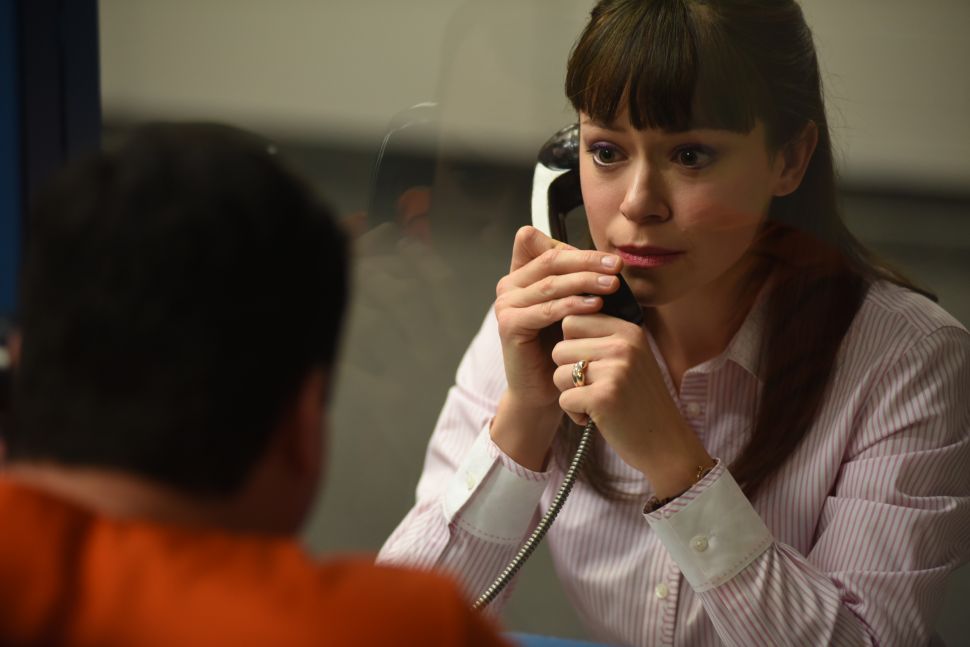