Orphan Black is always playing with the concept of nature vs. nurture—in all of those words’ myriad meanings and variations. And just when we think we at least have a sense of what the stakes of this ongoing internal debate are, along comes Rachel Duncan and turns everything on its head. For everyone involved.

After seeming to embrace her clone sisters and her clone status to bring Evie Cho down last week, now Rachel, arguably the protagonist of this week’s season finale, reveals her true colors, turning on everyone—sister Sarah, mother Susan, even pseudo-daughter Charlotte—to advance her own position within Neolution.

But what does the idea of “true colors” even mean when you’re a clone? Rachel certainly seems conflicted on this topic herself. Her actions make it abundantly clear what her most fundamental inner nature is, while simultaneously establishing that Rachel is somehow categorically different than her (genetically identical) sisters.

As a parallel, we also learn this week that we never really knew what Neolution truly was either—as once again the organization reveals itself to have higher, stranger levels beyond what we’ve seen of it so far.

The catalyst for all of this is Susan’s discovery that the stem cells they have been creating to cure Cosima are viable—meaning she can now not just cure the clone illness, but restart the whole cloning process over again. It is now possible, finally, for her to make new clones, as she has rediscovered the secret that her husband died to hide from the world.

Susan tells the Neolution board, and they promptly go ahead and depose (and apparently murder) the disgraced Evie, to prepare for Susan to lead them into the future.

But then she tells Rachel about her new plans, wanting to share her joy with the woman she still seems to think of as a daughter and partner—rather than as the ruthless power-mad virago Rachel has always actually been.

Susan should have seen the double-cross coming, being as she was already in the process of double-crossing Cosima herself. Cos, for her part, overhears Susan crowing about the era of new clones and understandably feels used and betrayed. So Susan locks her out of the research and traps her in the basement, not realizing she’s busy protecting the wrong flank.

Because Rachel has been forming a plan of her own: She’s going to call an earlier meeting of the Neolution board and propose that she be put in charge instead of Susan. Susan’s not able to do what must be done, she explains, due to her weakness when it comes to the clones. You know, because she tends to see them as people, not, say, lab animals. Rachel, on the other hand, despite being a clone herself—or perhaps because she’s one—can detach from them, can treat the clones like property. Thus, Rachel reasons, she will be able to unite the two sides of Neolution, Susan’s clones and Evie’s implants, using successive generations of the clones as disposable lab mice, allowing her to accelerate the implants’ rewriting of evolution.

Simple, grotesque, diabolical. The board loves it. But—the final call is not theirs. (Ooh, but whose is it?)

Susan figures out what’s going on and basically disowns Rachel, but not before telling her that Neolution’s just using her too, since she’s just as much a patented piece of property as any of her sisters. Rachel puts her response in the form of stabbing Susan in the belly with a kitchen knife, right in front of Cosima and Charlotte, who have just broken out of the basement. They run for a boat to escape while Rachel watches her mother bleed out.

Meanwhile, back in the real world (i.e. Canada), Crystal sees Evie Cho getting eviscerated (figuratively) (and yes, it’s ridiculous and wonderful that I have to make that distinction) on TV and recognizes her right-hand man Ian Van Leer. He’s the guy who kidnapped Delphine after she was shot (by, we learn, the late, creepy Detective Duko). So she calls up Felix and asks to be let into the big secret everyone’s been keeping from her, in exchange for her info on Van Leer.

In a bit of much-needed comic relief in such a grim episode, our heroes finally tell Crystal what’s going on—and she just doesn’t buy it, even when confronted with her double Sarah. Hilariously, she doesn’t really even think they look that much alike. She seems just underwhelmed by the whole thing.

But despite being a complete idiot, Crystal has also managed to stumble into quite a lot of important knowledge by sheer force of will. (Chalk one up in the “nature” column: No matter their individual personalities, the Leda clones definitely all share a doggedly stubborn determination.) So Crystal does in fact know that there’s a huge battle being waged between two factions inside a clandestine organization. She just thinks the fight is all about who gets to use human subjects for cosmetics testing.

She tells them about Van Leer, and Sarah—dressed as Crystal, pretending in turn to be a reporter for TMZ— goes to confront him, with an armed Mrs. S waiting in the wings. At gunpoint, Van Leer reveals Rachel’s real plan to them.

And that’s how Sarah ends up on a helicopter to the Island of Doctor Moreau, where she finds a bleeding Susan and a foaming-at-the-mouth Rachel, ready for a fight. Rachel beats Sarah up with her cane, stabs her in the leg with that same damned kitchen knife, and then shoots at her as she flees the house. Sarah’s desperate call to Mrs. S for help is answered by Ferdinand (oh, hi Ferdinand!) who has taken her family hostage as insurance for Rachel. Bet you regret saving that dude’s life from M.K. now, eh?

Even though they’re both geniuses, Cosima and Charlotte wander aimlessly in the woods until they get hypothermia and nearly die. But the weird bearded dude from Rachel’s bionic eye-visions finds them and brings them to his camp on the other end of the island. Where, surprise!—Delphine has been alive all this time. And they have what would have been a touching reunion except that they’re surrounded by some kind of fanatic Neolutionist militia, and also one of them is dying.

Delphine tries to nurse Cos back to health, and Cosima reveals that before leaving Susan’s house she grabbed the clone stem cells. “I finished our homework,” she tells Delphine adorably, and it seems that they have the means to actually cure her. But her life is very much still in danger, whether from the disease, the hypothermia, or the men with guns all around them who apparently won’t take very kindly to her meddling with the future of cloning.

And there we end up, with all of our sestras left more or less in jeopardy until next season: Cosima fighting for her life in a campsite of crazies, Sarah bleeding on a beach in the middle of nowhere, Crystal having to play nerd games in a comic book store while she waits for someone to tell her what is really going on, and Helena and Alison hiding out from the cops in Helena’s hut in a national park and subsisting on her venison entrails stew—an adjustment Alison and her stomach are not taking very well. (Ali’s not actually onscreen in the episode at all, and it’s a further testament to Tatiana Maslany’s impossibly perfect performance that my first thought here was, “Weird that one of the main characters wasn’t in the finale at all…I wonder what the actress who plays Alison was up to…oh, right.”)

And finally Rachel, now on top, relishing her victory, while realizing that she has been led down this path by someone. The person sending her visions to her eye, the one who saved Delphine, the man who founded this island and the whole Neolutionist project in the first place: P.T. Westmoreland, the 19th century industrialist, still alive and kicking after all these years.

“That’s impossible!” Rachel says. Susan replies: “Not for him.”

So Westmoreland’s the true leader of Neolution, the one everyone has been deferring to this whole time, and so now it is time for Rachel to meet him. There comes the knock on the door—not to be opened until next year. 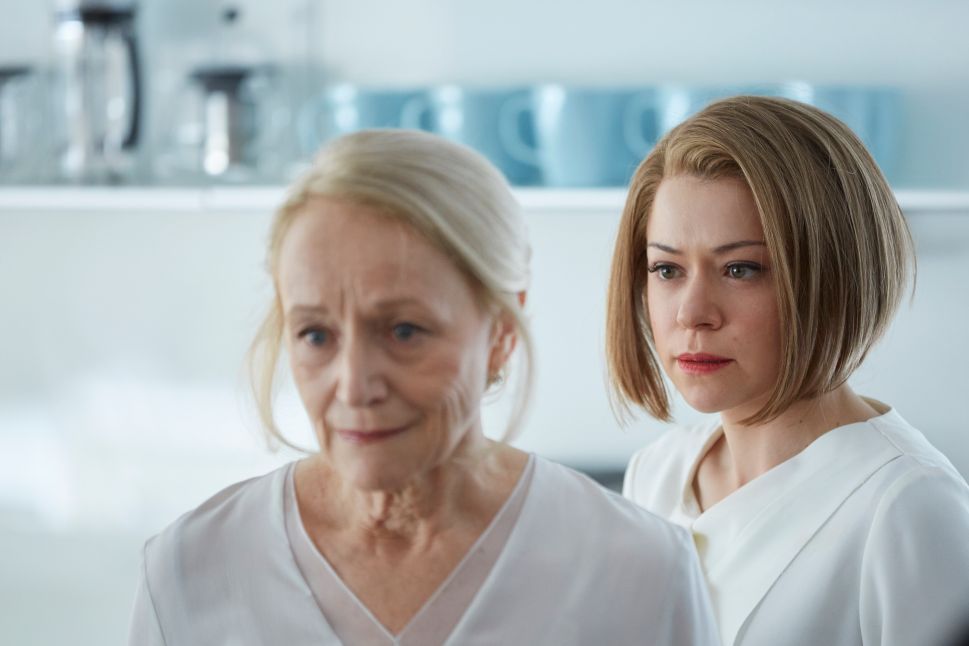