Does anyone remember Rob Schneider’s Deus Bigelow: Male Gigolo? It was the SNL alum and professional pity-receptacle’s first big feature, built on the cache of goodwill he earned for his role in Judge Dredd as an amateur pity-receptacle. It was the movie so bad it propelled Roger Ebert from his role as the guy you sit through to hear Siskel’s movie reviews to being a household name in angry movie reviews. If you don’t remember it, it’s ok, because, as I learned when fact-checking my memory of the quote “fat chicks need love too, but they gotta pay”, I don’t remember it either. Turns out that quote’s from an episode of Family Guy I swear I never watched, but somehow got stored alongside 1999’s foremost documentary on male prostitution.

You may be wondering what the point of all that was, and I swear there is one. The point is that a line so shitty and gross ought to stick out distinctively in the mind, and in our society it doesn’t. It’s taken as given that overweight women run a love deficit in our society, both because they are overweight and because they are women. If you’re the kind of person who reads a lefty rag like the Observer and is interested in psychotherapy, this may not be news to you, but it sure as shit astonishes me that in 2016 we’re only just starting to do something about it.

Acceptance therapy is tricky, because it’s the kind of work that most closely hews to the paradoxical nature of the mind.

To this end, JC Penney recently launched a big prestige ad, presumably the start of a campaign, and christened it with the hashtag #HereIAm. The three-and-a-half-minutes long ad is devoted to giving a platform for overweight women to talk about how they are worth just as much as anyone else. They don’t run a value deficit and they don’t have to earn their place in society. Over the course of the ad, six different women talk about their journey to and realization of self acceptance, and how liberating that has been to them. The ad opens, so this is where you’re expected to put your focus, on a quote from one of the women about how painful it is to be treated like dirt on account of not being thin. But for my money, the quote to pull is the one buried about halfway through the piece, “you can’t love your body for what you hope it turns into without actively loving it for what it is today.”

Psychologically, this is extremely fertile ground; there are a lot of directions we could go from here. The cynic in me wants to focus on how body acceptance is being championed by women’s apparel companies (see also: that video where the sketch artist draws women based on their friend’s descriptions, which of course turned out to be an ad for Dove). But in the wake of having looked at my Facebook feed today I honestly can’t take any more cynicism, so let’s stick to positive psychology. What the quote I highlighted above is about is the notion of therapeutic acceptance, and it can be kind of a doozy.

Acceptance therapy is tricky, because it’s the kind of work that most closely hews to the paradoxical nature of the mind. The basic idea behind working with acceptance is that when a client comes to you wanting to change, the way to help them do that is to get them to be content with what already is. As confusing as this sounds, and as frustrating as it can be to hear coming from your therapist, the science is extremely clear: acceptance therapy works. If you really want something to change, you gotta cut that out. Change your thought patterns about wanting to change, and you will.

The mind is easily tricked into mistaking attention for action. When you spend all day worrying about how you’re going to get fit, your brain takes that to be as good as actually doing something about it.

Why does this work? There’s a few reasons for this, so let’s start with the structural. It turns out that we humans are simple creatures, and that our brains, for all their incredible complexity, are gullible AF. The mind is easily tricked into mistaking attention for action. When you spend all day worrying about how you’re going to get fit, your brain takes that to be as good as actually doing something about it. So if you can convince yourself to take a deep breath and stop worrying, you’ll short that anxiety/non-action circuit and actually have a shot at making concrete change in your life.

The necessity of actively stopping the worry loop leads directly into the second, and more interesting, reason why acceptance therapy works. Humans are socially complex creatures. We have a lot of built-in group dynamics for maintaining the quality of the group, and they’re not clever. So when the group notices someone who doesn’t seem up to par for whatever reason, they get dropped, like the guy at work who still says Drumpf not getting invited to join the Trump shit-talking dog pile.

If you’re on the receiving end of that speculation, it’s brutal. By which I mean, cops will literally brutalize you for it. Rather than having to be policed, people who are socially vulnerable tend to police themselves in a process of internalizing oppression. The idea being, a vulnerable minority will usually police itself just a little less painfully than the majority would have. This is why people of color and other vulnerable minorities often teach their children never to disrespect authority, because they have to. They know that as painful as it is to teach your child not to stand up for themselves, that pain could never compare to having your child be murdered by the police for playing with a toy gun.

So sometimes this process makes a kind of sad, calculated sense, and sometimes it doesn’t. In the case of the women in JC Penney’s new ad, the pain of self aggression turns out to be worse than the pain of social ostracism. So a few folks break free of that and decide to cut the shit and love themselves. Paradoxically, this leads to a radical new option. Whereas in the world of strict cause and effect, one would expect dropping the behaviors that protect from oppression would lead to more oppression, in the case of #HereIAm, by dropping those behaviors it frees these women up to say that actually everyone should just stop being a shallow asshole and respect them as human beings.

The ad makers really seem to be suggesting that you can make up for the social deficit of being overweight by having a really cool job.

That’s because once you love yourself, you start expecting to be treated as you would like to be. If I’m bad with money and hate myself for it, it’s gonna be really hard to do anything about that because I don’t like to do things for people I hate. Which means that if you can figure out how to love yourself while remaining fully aware of all your flaws, the things that cost you social capital, then you’re going to be fine.

The bummer with the #HereIAm ad is that the people who made it don’t really seem to understand this. Each woman who speaks in the ad is introduced with a little text crawl of their name and job, and the first five women featured all turn out to have baller gigs. There’s a published author, a professional singer, a reality show winner, etc. It’s not until halfway through the runtime that we meet Valerie Sagun, who we are informed is a “yoga practitioner and self-love enthusiast”. Which, despite being awesome, in the context of everyone else’s intro reads like doublespeak for “works odd jobs”.

The ad makers really seem to be suggesting that you can make up for the social deficit of being overweight by having a really cool job. Which is bullshit, they’ve missed the point entirely. The point that I think the women in the ad are trying to make in spite of the self-aggressive realities of how advertising works, is that they are worthy of love regardless of how they present. Ms. Sagun cuts through the marketing to the heart of the matter: whereas everyone else is presented as being worthy of love because of what they do, what she does is love herself. 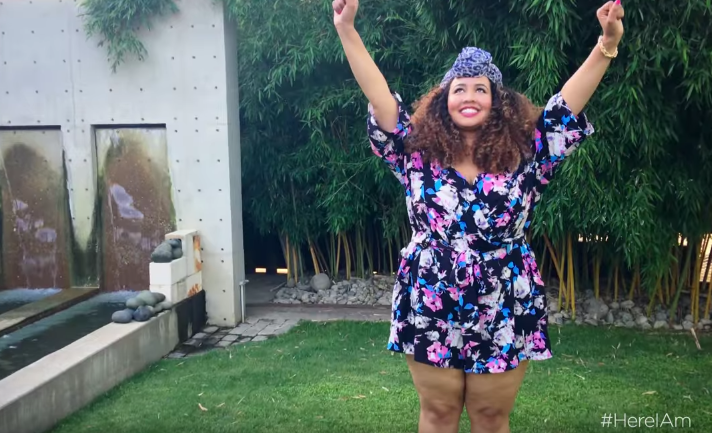