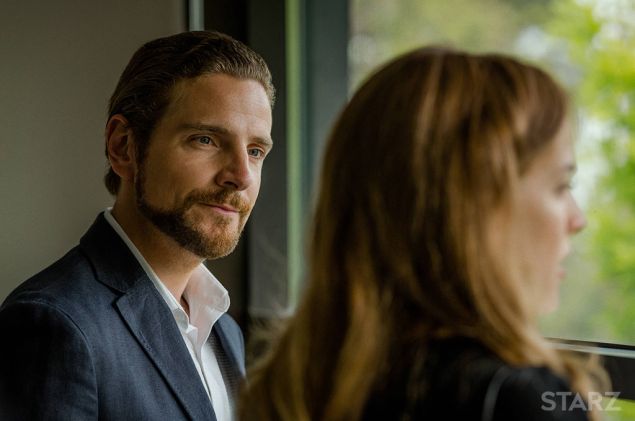 About halfway through its first season, Starz’s The Girlfriend Experience takes an interesting and purposeful pivot away from the themes of the movie it takes its name and early cues from. The first four episodes are content to simply follow its clever and willful young protagonist, Christine Reade, as she explores a cluster of overlapping worlds: escorting and law, the young and the old, the hungry and the powerful. Like the movie, this section of the show is mostly satisfying a curiosity about what that life might be like, how much fun it would be to dip yourself into that level of drama. In many ways, this early section is an effort to bring the viewer into the experience of Christine’s johns – to put her in the spotlight and let us experience the girlfriend experience for ourselves.

You can see it in the camerawork – the early episodes are marked by shots that often place Christine in frame when other people talk to her, allowing us to know what it’s like to watch her react, or often not, to our words. By the middle of the show, though, this has changed, and the script and cinematography align to bring us viewers into Christine’s life. I didn’t count, but I think we hear people say Christine’s name more times in episode 8 than in all previous episodes combined. Whereas Christine used to be a visitor in the worlds she spent time in, now she inhabits them, and this places a certain responsibility in her; now that she knows the rules, she gets to apply her own against them. The show may still be called The Girlfriend Experience, but the focus is now closer to the experience of being a girlfriend.

The thought behind Attachment Theory isn’t that your parents fuck you up — life does that all on its own — but that your parents, as well as other factors in early home life, determine the shape of how you’re fucked up.

What does that mean, though? What’s it like for Christine to inhabit her life, and what does it say about her? A person’s reactions to the difficulties of life, often most particularly in their twenties, is very much a reaction to their childhood. This is the basis for whats called Attachment Theory by the pros, and called the blame game by everyone else. The blame game, by the way, is a common misconception that therapy is really just the slowest and most expensive way to blame everything on your parents and then move on. The thought behind Attachment Theory isn’t that your parents fuck you up — life does that all on its own — but that your parents, as well as other factors in early home life, determine the shape of how you’re fucked up. So you’re not blaming so much as understanding, developing an awareness of, and working through all those bizarre ideas your folks had about how to raise you. 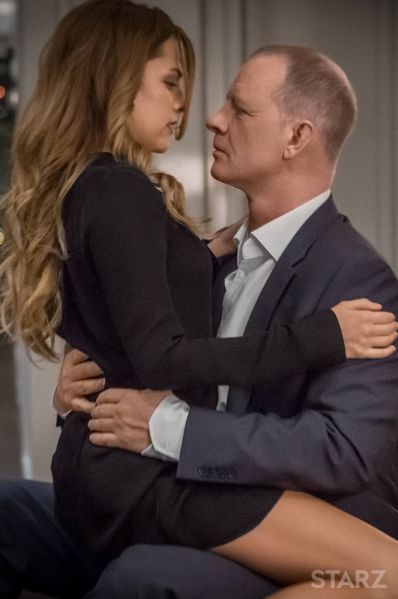 So to know Christine’s life, we should spend some time with her family. We don’t know a lot about them, but we’ve seen the broad strokes – high achieving sister, mom who seems to care but who Christine keeps at arm’s length, and no second parent in sight. In therapy, you really want to be careful about the assumptions you make, so since we can’t ask Christine for a more detailed family history, let’s see if we can’t work backwards based on some of her behaviors in the present. Throughout season 1 we have a few glimpses at Christine’s relationship with her mother, and it’s usually Christine blowing her off.

One quirk of Christine’s behavior worth noting is the method by which she dismisses her mom – she doesn’t ignore the call or even send it to voicemail, but instead always answers the phone in order to say she doesn’t have time to talk. There’s no malice in it, but there’s no expressed joy either; the message to her mother is a fairly clear variation of “talking to you is a drag and I’ll make time for it when I’m not busy”. We can see this same kind of pattern with her older sister, Annabel, as well. When Annabel comes to visit her, we can see that Christine is struggling through something. First Christine tries to avoid spending time with her sister, but is eventually coaxed into dinner. At dinner, Annabel asks her questions and she tries to answer, but usually ends up giving half-answers. The point being, the relationships here are strained but there doesn’t seem to be any expressed antipathy, which is usually a sign that a person wasn’t allowed to express their fears and frustrations growing up.

This all indicates a certain style of engaging with caregivers, which is what’s known as an Attachment Pattern. While there is a little dispute about classifications, four different Attachment Patterns are widely held to exist: Secure, Anxious-Ambivalent, Anxious-Avoidant, and Disorganized. Needless to say, there’s a lot to cover here, so let me cut to the chase: Anxious-Avoidant attachment is indicated by a child showing little emotion when a caregiver leaves or comes back and, within the A2 subtype, tends to both approach and ignore or even turn away from their caregiver returns. The classic example for this is a child walking backwards towards its mom, which is the sort of thing we see with Christine here. She’s dealing with conflicting desires to be a part of and to be apart from her family.

Whereas [Christine] appears to often be legitimately enjoying herself in sex scenes with her johns, where she is framed alone by the camera…her sex scene with Jack looks like a nerve-wracking and joyless affair.

The point of this conflicted behavior in a child is to manage a caregiver who rebuffs their natural attachment behavior; a toddler who is ignored whenever it reaches out to a parent learns quickly not to reach out. Basically, this Attachment Pattern is a process of emotional control the child learns to enact within itself in order to have its survival needs met, once the caregiver has shown that emotional reaching will be met with rejection. And the thing with Attachment Patterns is that they stick – behaviors in adult life are usually refined versions of behaviors learned in childhood.

A lot of therapists-in-training see that last part, look at their own lives, and despair. It’s a common reaction to assume that if you can’t confidently say you’re securely attached you might as well throw in the towel on pursuing your hopes and dreams, but that’s a weak idea held by unimaginative softies. For evidence to the contrary, just look at Christine’s life. Though she’s obviously got some skeletons in her closet, she’s kicking ass on the reg. She runs her own extremely successful luxury-goods business, while also interning at what appears to be a very posh and drama-filled law firm. She could be the star of her own show! And while she appears to be very anxious about who and how she lets in romantically, she’s still managing to try while maintaining her boundaries. 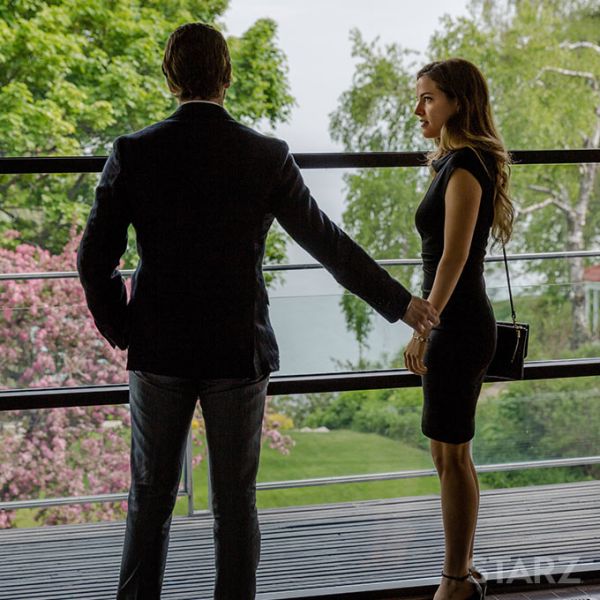 And that’s the point. Her girlfriend experience is an Anxious-Avoidant one, but that doesn’t mean she can’t enjoy it. You can see this in the difference between her experience with Jack versus her other johns. Jack wants desperately to be with her which, even before the show reveals the true extent of what an asshole he is, totally short-circuits her ability to enjoy herself with him. Whereas she appears to often be legitimately enjoying herself in sex scenes with her johns, where she is framed alone by the camera even though we know someone is waiting just out of view, her sex scene with Jack looks like a nerve-wracking and joyless affair.

James Cole Abrams, MA, is a psychotherapist living and working in Boulder and Denver, Colorado. His work can also be found at jamescoleabrams.com where he blogs every Sunday. 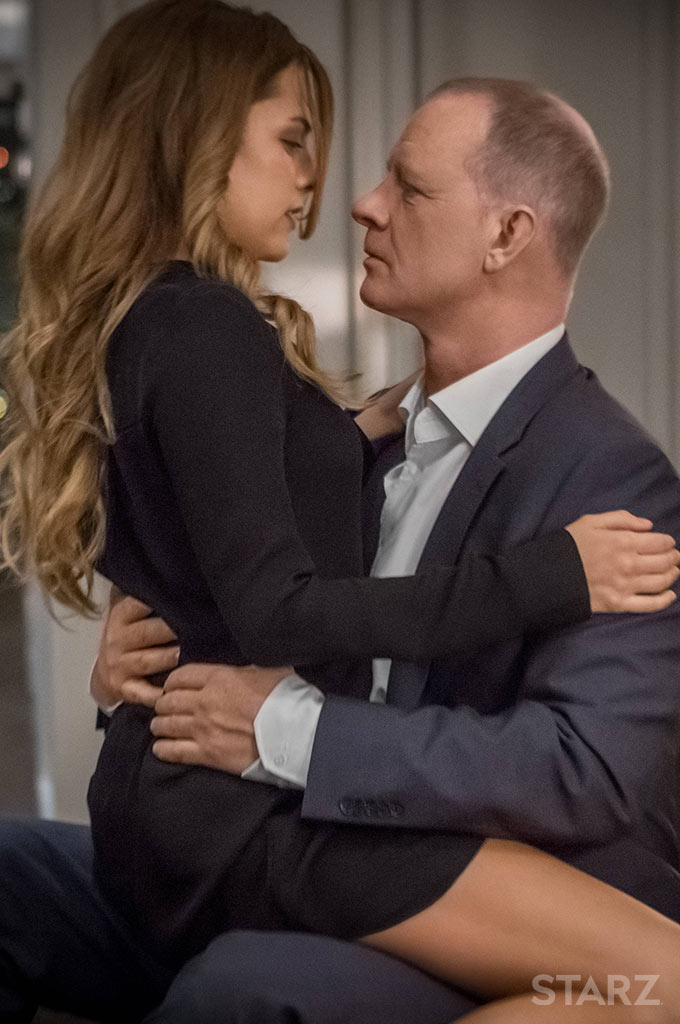