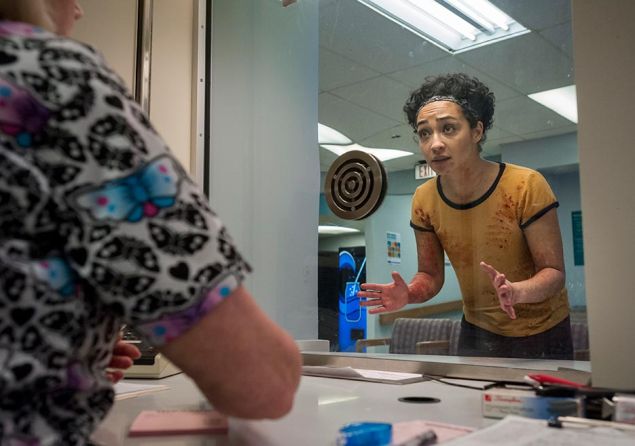 Every once in a while a show will present us with a storyline that acts as a convenient metaphor for that show as a whole. At first glance, “Cassidy, the century-old Irish vampire, bamboozles two unkillable Cockney angels into paying for a superhuman quantity of drugs at a Texas whorehouse before a case of mistaken identity causes him to be beaten through a second-story window” might seem an unlikely candidate for this role. Take a second look, however, and…well, yeah, it still doesn’t make a ton of sense. But a third look — that’ll do it. In “Monster Swamp,” its first season’s fourth episode, Preacher is as wild and intoxicating as ever. But it’s a shallow high, with a hell of a crash coming down.

Take the cold open, a chase scene involving an underwear-clad woman fleeing unknown pursuers that ricochets rapidly between creepy and zany and back to creepy again. There’s a closeup on a light and a schoolbus drifting past. Then the town mascot wanders by. Then the scantily clad woman shows up. Then it seems like she’s running for her life. A truck pursues her, with a rifle mounted at the rear windshield. As she flees, she tries to hide, but her hiding place is occupied by two other women in their underwear, who wave her away. By this point it’s clear she’s being chased by the macho employees of the menacing local monopoly Quincannon Meat & Power, meaning this is some kind of game involving a whole other exchange of meat and power. She keeps running, and is joined side-by-side by another woman, who gets shot by what looks like some kind of dart, not a bullet. When our heroine is finally cornered, her pursuer tags her with a paintball, indicating this is likely all some kind of bought-and-paid-for foreplay in Most Dangerous Game form. But just when you think all is well (or well-ish), boom, the ground opens up and she falls in a sinkhole and dies.

Like the poor woman herself, we’re never really standing on solid ground here. Our understanding of what’s happening, and to whom, and why, is constantly evolving. What’s more, each twist and revelation in the sequence, from the mascot to the sinkhole and everything in between, serves as a little dopamine hit of weirdness or edginess — an upper or a downer, an hallucinogen or a cold shower and a cup of black coffee.

And that’s how the whole series functions, right? Certainly that’s how this episode in particular works. Jesse’s noble preacher father…beat him in front of his friends! The angels have a hotline to God or whatever…but it doesn’t ring…until it finally does! Tulip assaults an asshole client in the whorehouse where she was apparently raised…but it’s the wrong guy…but it’s a vampire who can’t die…which he demonstrates by drinking blood in front of her, for some reason! Odin Quincannon the creepy business magnate who doesn’t give a shit about a dead woman…plays Qbert…and hangs out with Jesse building a miniature recreation of the Alamo on the weekends because they’re secretly friends…but still pisses in the briefcase of the hapless mayor to show him who’s boss…and the mayor then tries to seduce Emily, Jesse’s kindly assistant…who blows him off…but then reveals they’re fuckbuddies! Zzzzap! Zzzzap! Zzzzap! Nearly every scene is an “everything you know is wrong” or a “holy shit, can you believe this?” This thing’s a dramatic jack-in-the-box. You could replace every note of music with “Pop! Goes the Weasel” and not miss a beat.

What you do miss is a sense of place, rather than a cinematic Texas where anything can happen, provided it’s shit-kicking and seedy. You miss characters who are driven by anything more complicated than the Seven Deadlies, and who reveal themselves in ways other than the personal equivalent of jumps cares. You miss a theme that feels more sincere than the flatscreen-TV raffle Jesse concocts to lure the town to church on the day he decides to telepathically command Odin Quincannon to “SERVE GOD.” In other words, you miss the stuff great drama is sustained by. You’re like Cassidy, so zonked out of his gourd on pills and powder and pussy that he can be bested by someone with a majorette’s baton. Or you’re like a rat in one of those experiments where the little critters keep selecting a tiny amount of cocaine rather than food until they die. Each zap-zap-zap of oddness or coolness or craziness feels fun enough in the moment. But then you’re splattered on the ground, wondering where the last hour went. It’s not leaving you anything to remember it by yet, that’s for sure. 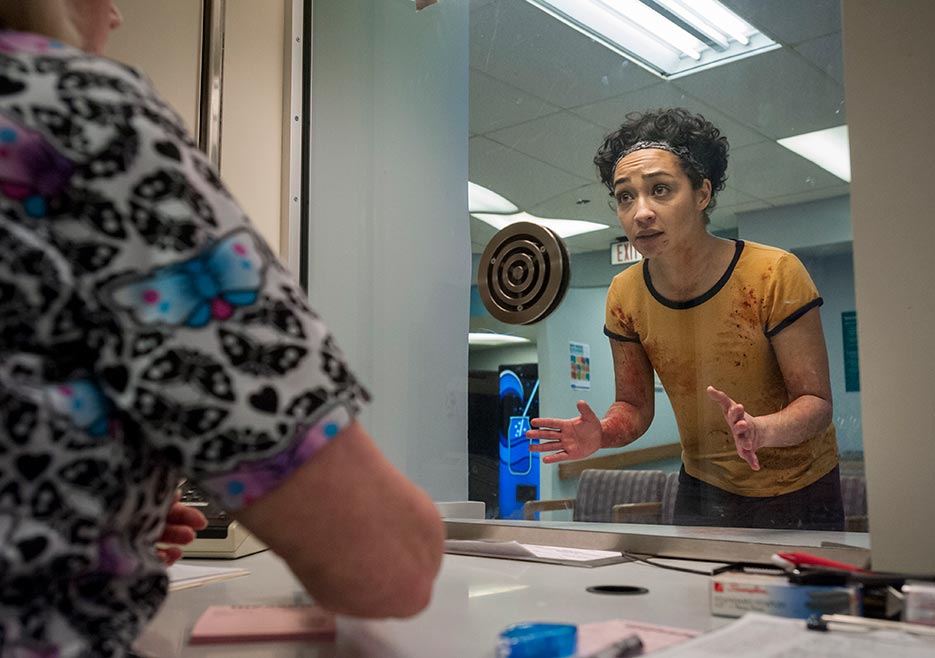