Say the words “Stuy High” or “Bronx Science” and most New Yorkers conjure up a singular image: excellence in education with admission based on merit. Such a description would not be wrong: the city’s eight “elite” high schools—Stuyvesant, Bronx Science, Brooklyn Tech and four smaller schools, like Staten Island Tech—count 14 Nobel laureates, Pulitzer Prize winners and distinguished leaders from many fields among their graduates.

Some critics, Mayor de Blasio among them, bemoan the fact that enrollment at these schools does not mirror the racial composition of the city. Black and Hispanic students are 68 percent of the city’s school population, yet they comprise only 11 percent of the specialized high school enrollment.

That should concern all of us, not just the mayor—but for very different reasons from those de Blasio is willing to articulate. The problem is that far too few students—of all races and economic backgrounds—are doing high-quality work. Too many kids are inadequately prepared for higher standards and rigorous coursework.

Don’t down academic standards in the name of diversity.

The Department of Education’s new solution is to provide exam tutoring for minority students. That is a much better approach than some critics of the elite schools’ admission policy have been pushing for. They want to scrap the single test and instead use soft criteria like recommendations, attendance and “leadership.” In short, they want to down standards in the name of promoting diversity.

The Department of Education’s plan—and the State Legislature’s funding of the project—were triggered by a complaint filed with the U.S. Department of Education by the NAACP Legal Defense Fund in 2012. The complaint didn’t allege that the SHSAT entrance exam discriminated against black and Hispanic students. Instead, it cited statistics detailing declining black and Latino enrollment and SHSAT pass rates, and thus the discrimination was one of “disparate impact.”

The Department of Education plans to expand its free tutoring program and hire up to five “outreach” workers whose mission will be to convince promising black and Hispanic students to take the SHSAT exam. Perhaps most surprisingly to Observer readers, the city Department of Education already offers 15 different tutoring programs—and that is just in math. There are another 60 in science, dozens in the arts and humanities and 42 just for test-prep. One more focusing just on the elite high school admissions test couldn’t hurt—if it isn’t discriminatory.

It is expected that the special tutoring programs will concentrate on middle schools with high black and Hispanic enrollment. Schools that receive the additional funds are being told to develop plans to “promote a school culture that is welcoming to all students.” In other words, ambitious white or Asian kids won’t be turned away from the tutoring sessions. But by targeting which schools receive the funds, the DOE may be engaging in reverse discrimination through—yes, you guessed it, disparate impact. Imagine the outrage if the government said, “We’re allocating more money for white students.”

We are all for tutoring services being available—for all students. And we’re in favor of “outreach programs” designed to encourage kids to apply to elite schools. Raising the bar for all children is a good thing. But we are against state funds being allocated on the basis of race. 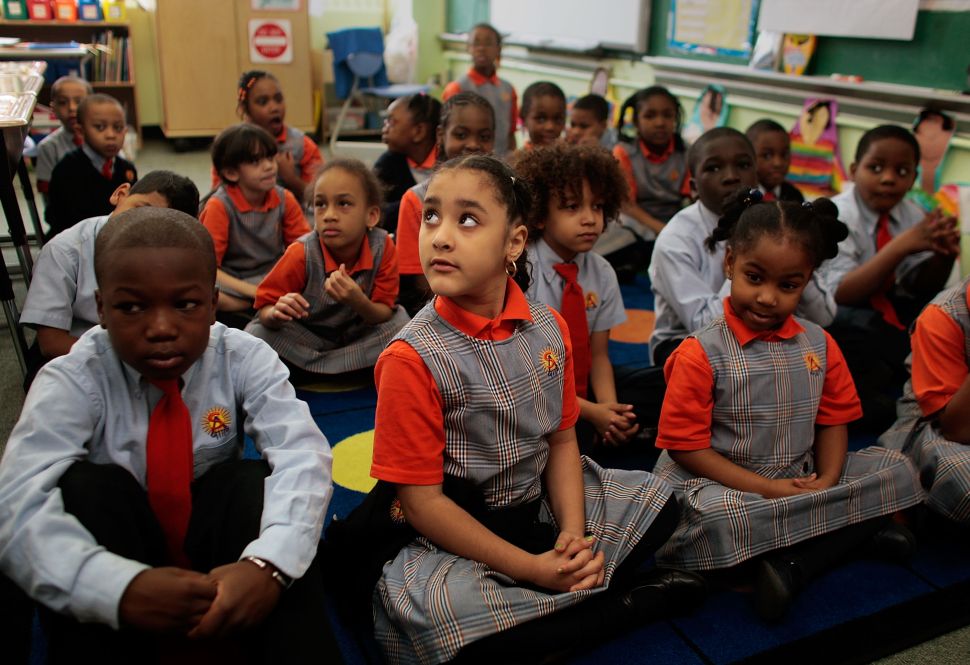