Earlier this year, 200 progressive activists stormed the downtown Chicago Hilton with the intention of disrupting a gay rights event. Not that they had anything against gay rights. No, the object of their contempt was the Israelis who had organized this event to support the rights of gay people. And that just didn’t fit the progressives’ political agenda.

Israelis had arrived in Chicago to participate in the Creating Change Conference  and, like dozens of other groups, were hosting an event at the National LGBTQ Task Force conference. The Jewish state has been an international leader in LGBT rights – years ahead of the United States. But as America has witnessed over the past two decades, attacking Israel takes precedence over all of the Left’s agenda items, including support for gay rights. Disdain for Israel in many progressive political circles, including gay rights activists seated at the roundtable, goes beyond hypocrisy and anti-Semitism; it’s the most dangerous form of homophobia.

Israel is arguably the friendliest nation in the world for people who identify with the LGBT community, indeed the only safe place for gays in the Middle East. But the opposition to Israel’s existence is so virulent that Israel’s detractors have deemed gay rights in Israel as part of a political conspiracy to divert attention from the Palestinian issue. “Pinkwashing” is the term leftists use to demonize and delegitimize Israel’s leadership in gay rights.

While progressive groups, including members of the LGBT community themselves, continue to attack the Jewish state through their support of the anti-Israel Boycott, Divestment and Sanctions (BDS) movement and promote the falsehood that Israel is an apartheid state, they are silent over the horrible nightmare of being gay in a Muslim state.

From Iran to Gaza, being gay is a death sentence. The lucky ones are simply executed by hanging or thrown off a tall building.

From Iran to Gaza, being gay is a death sentence. The lucky ones are simply executed by hanging or thrown off a tall building. Others experience torture before meeting their ultimate fate. But these atrocities rarely make the Twitter and Facebook feeds of leftist organizations more worried about selective political correctness than human rights.

Remaining silent in the face of a genocidal ideology calling for the murder of a group of people based on their race, religion or sexual orientation is a form of hatred in its own right, making one complicit in evil of the worst kind.

After news surfaced about the horrors that took place in Orlando, progressive groups such as Code Pink and Jewish Voice for Peace assumed a defensive posture, showing more concern about Islamophobia than for the victims. These groups remain silent over the atrocities committed against the LGBT community in Muslim countries, but when Jews are building homes in Israel or American politicians discuss securing our borders, these groups scream bloody murder. Literally.

For 25 years I’ve advocated for gay rights and proudly denounced homophobia. As a former political consultant working mostly with the GOP, I’ve had my share of disagreements over my advocacy. But the one thing I’ve never heard from conservatives and supporters of traditional family values is hate. Never has a devout Christian or Orthodox Jew ever expressed to me a desire to see gays physically harmed, or worse. There is a world of difference between opposition to redefining marriage and the belief that gays should be exterminated.

But you would never know it, listening to progressive activists in the United States.

In fact, it’s just the opposite.

Progressive ideologues go out of their way to equate Christian theology with Islamic extremism. I may not agree with the GOP party platform on LGBT issues, but comparing religious Christians or Republicans to ISIS, al-Qaeda or the mullocracy in Tehran is simply irrational hate speech.

Leftists in America have perverted the ideal of tolerance. They now practice selective tolerance, which is tolerance for the intolerant. Simply put, progressive activism ignores hate stemming from those who identify with Islam. No matter how unjust the laws and despicable the behavior perpetrated by terrorist groups or Islamic regimes, the Left will condemn those who bring up their human rights abuses. In the eyes of the progressive movement, only Christians and Jews, America and Israel can be guilty of discrimination.

The LGBT community needs to take off the blinders and reevaluate who its allies are. Progressives will abandon you when Islamic extremism is at your door. In other words, when your rights conflict with their anti-Israel and anti-America agenda, you’re on your own. 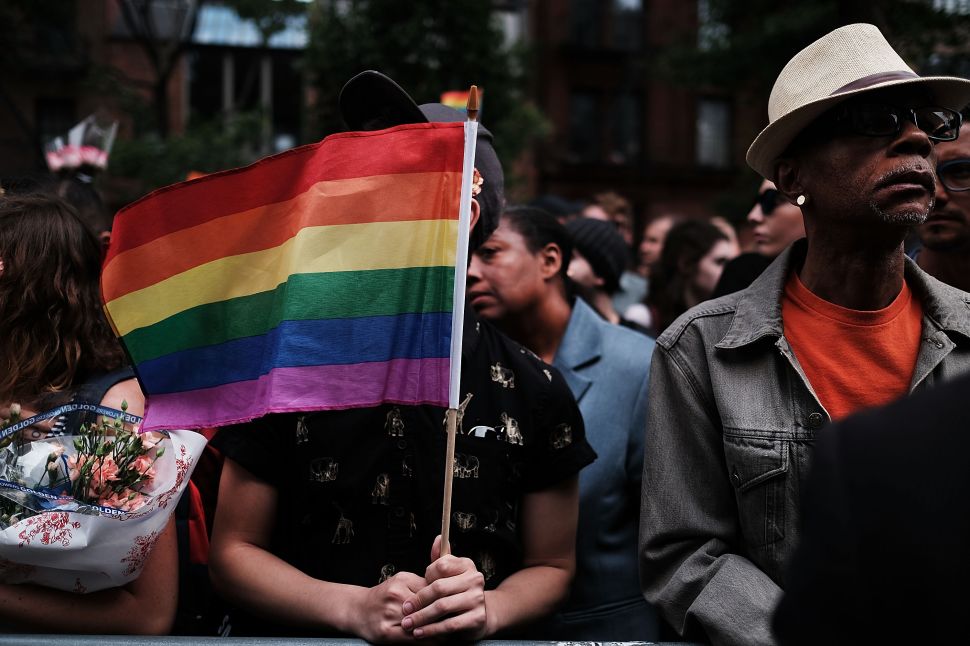