Another week, another episode, and we’re back in Crazy Town. AKA, Dorinda’s Berkshire’s mansion. At this point, after 3 episodes, Dorinda’s sleepover is beginning to feel like Hotel California: will we ever get to leave? But, thankfully, we have reached the end of the interminably long Weekend-From-Hell. Unfortunately, this pointless fight between Luann and Bethenny needs to take one last dying gasp before everyone can all go home.

So we again begin where we left off – Bethenny walking in on Luann talking crap about Bethenny to Dorinda – a classic comic moment fit for a sitcom. Bethenny stood in the kitchen, in her fabulous gray onesie pajamas, reprimanding Luann for not being honest, for saying crappy things and not admitting to them.

As Luann and Bethenny yelled at each other in the next room, Dorinda and Jules pulled out a game of Twister – the game that practically invented slumber parties. It was a nice distraction from the storm brewing mere feet away and it was nice to see these two women – women who have legitimate reasons to be upset – choose to enjoy themselves during a moment of intense tension.

And it’s a good thing too, because the fight Bethenny has with Luann is over the most ridiculous concept ever developed and disseminated on this Reality Television franchise: the girl’s girl. Here, Luann is declared to be not a “girl’s girl” because she encroaches on other women’s love interests. In Real Housewife-land, to not be a “girl’s girl” is the worst possible offense; akin to lying or murder. It’s why Bethenny went practically psychopathic over this whole issue, why Luann was so hurt by Bethenny’s words.

But Luann’s problem is much deeper than that. She is the definition of hypocritical. Case in point: on the one hand she’s “helping” Sonja, but when Carole mentioned that Sonja says Luann steals all her boyfriends, Luann threw Sonja under the bus and said, “and you believe her?”

Luann sat there with a smug grin across her face as Bethenny spoke for all of us viewers when she explained to Luann exactly the kind of reputation she has. That she sleeps with married men yet derides others for doing the same, that she writes books on etiquette yet lacks basic manners and courtesy. And Bethenny, being the ultimate truth-teller cannot handle the bullshit.

As a rule, Luann tries too hard to defend herself. She bashes others as a defense. When Ramona detailed an exact scenario where Luann poached a guy Ramona was flirting with, Luann didn’t say, “ok I see what you’re talking about.” She came back with, “Should we talk about what you did in the Turks and Caicos?” It’s the tactic of a deflector, of someone who wants to take the spotlight off her own misdeeds. But Bethenny didn’t let Ramona take the bait. Bethenny was again the Greek chorus, speaking for all of us when she said “So? You both steal men. So?” Luann had nothing to say to that.

Just as the fight began to devolve, again, we were saved by the bell. Literally. At the door was the female Santa, who came bearing gifts just in time for dinner. The gifts were bottle sized monogrammed glasses, the perfect present for this crew. Because to hang out with these women, copious amounts of alcohol is not just necessary, it’s practically written into their contract.

But the dinner was such a 180 from the scene just mere minutes before. The women sat around the table, eating lasagna calmly, as if nothing happened. This behavior isn’t normal and so the only normal person in the room – Carole – left the table, unable to handle everyone acting like nothing just happened. With Carole’s departure, the other women began to head to bed as well and the evening died down. But not before Bethenny apologizes profusely to Luann for her behavior. She still stuck by the words she said, but she understands that her actions were a little batshit-crazy. Unlike Luann who is too delusional to see where she went wrong, Bethenny is very self-aware. She was able to openly admit what she did wrong: freaking out on Luann and acting like a crazy person.

The next morning, Luann woke up early to take a morning stroll, looking relaxed and glamorous. But Bethenny and Carole lay in bed together, looking like they had a major hangover. Bethenny’s day after reaction? “Not your best Bethenny Frankel.” But Luann is so delusional, so self-involved, that her delusion allowed her to have a good night’s sleep, to wake up early, make bacon for the crew and pretend like the night before never happened. When you so embody a persona, when your whole life is a façade and nothing anyone says can break it down, people tearing down those delusions literally have no effect on you. You are living an alternate reality, where the way you present yourself is the way you believe the rest of the world sees you. And no matter how many people pull a “Bethenny” and call her out on the truth, she will never believe it.

After being so traumatized by the previous night’s events, and convinced that Dorinda’s house is cursed, Carole and Bethenny planned their escape – wearing their pajamas under their jackets. They tried to sneak out to avoid saying goodbye. But Luann, the perpetually sneaky and nosy Countess, sees their surreptitious escape. Realizing they were caught, and not wanting to commit the same rude faux-pas they made at Jules’s Hamptons home, they went back to say goodbye.

After they left, the rest of the women trickle out and head back to the city. Now that Jules’s father is stabilized and she’s out of the idyllic Berkshires, annoying Jules is back. The no-nanny, incompetent, unintelligent Jules who makes me want to slap her and shake some sense into her.

We also have a brief pit-stop at Bethenny’s home, where Carole stopped by to talk about the Weekend-From-Hell. Carole has a very normal-person’s attitude to Luann. She recognizes that not everyone needs to be friends. And she’s ok with that. But unfortunately, she’s a member of this show which requires her to interact with Luann.

We then head over to a restaurant called the Black Barn where Ramona was throwing a Holiday party before everyone went away on vacation. Luann walked in wearing the most horrific, ill-fitting red lace jumpsuit from her cheaply made collection, accessorized with a Luann-classic: a hubcap necklace whose dagger-like crystals would make Wilma Flintstone proud. And those boots…just no Luann. So so bad.

This party isn’t just a holiday party – it’s an opportunity for Ramona to play peacemaker. But, like any self-appointed “peacemaker,” Ramona’s attempt to make peace had a more sinister purpose: stirring the pot. Ramona had been “coaching” Sonja to talk to Bethenny because Sonja tends to “just keep talking and talking.” Ramona also coached Luann by going over what Ramona believes was Carole’s problem with Luann’s previous apology: it didn’t come sooner. But the issue isn’t that the apology didn’t come sooner, it was that the apology wasn’t an apology because she never actually admitted wrongdoing. And Luann’s reaction proves Carole’s point: Luann claims she’s over it and doesn’t understand why Carole is holding a grudge. That’s the problem, it’s not a grudge. There’s no point in trying to play peacemaker to “solve” this conflict because there’s nothing to solve. Carole has washed her hands of Luann, and Bethenny has done the same with Sonja.

And so that’s why they didn’t fall into the trap laid by Ramona and Luann. Carole listened to Luann’s apology and just accepted it. Bethenny already planned to leave early for a trip to Vermont so she could avoid a confrontation with Sonja. Even when Sonja arrived and approached the couch Bethenny was sitting on, Bethenny played the same game she did with Slimy Johnny at her party in the Hamptons: she simply walked away.

Ramona and Luann are so upset that a confrontation between Bethenny and Sonja didn’t go down, because Sonja dared to respect Bethenny’s boundaries, that Ramona gets the conflict she inadvertently tried to instigate. Luann doesn’t stop berating Sonja – she was relentless, reminding Sonja how she promised to stop calling her wine Tipsy Girl. With Luann assaulting her with a steady barrage of put-downs, Sonja snapped. She yelled at Luann, at Ramona. But, to everyone’s surprise, the true source of her wrath was Dorinda. Because Sonja was convinced that if she got to go to Dorinda’s house, she could have resolved it with Bethenny. And so, in a huff, Sonja stalked out of Ramona’s party; the rest of the cast left bewildered in her wake.

– “It was how I’d see my teacher talk to my 5-year-old. It was like, ‘Jack and Jill went up the hill, Luann fell down and broke her Countess crown and had to say she didn’t create the Skinny Girl Margarita.”

– “Carole said she had no hard feelings. So what do you call these? Soft boils?” Oh Sonja.

– The Countess creepily reaching out to fix Bethenny’s hair at Ramona’s Holiday party. She really is obsessed with Bethenny’s new hair, specifically with how similar it is to her own. 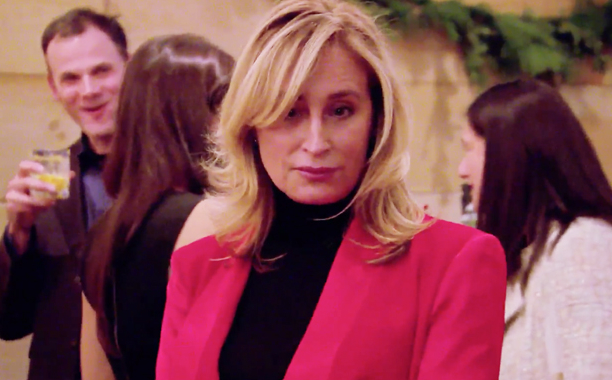