Just a few blocks from where New York’s Pride parade marched up Fifth Avenue on Sunday, nearly a thousand volunteers gathered at the 69th Regiment Armory to show solidarity with another group: Syrian refugees.

The volunteers, representing a diverse cross-section of the city’s religious communities, formed temporary assembly lines within the cavernous armory. Working in three shifts, Jews, Christians, Muslims, Hindus, Sikhs and Buddhists assembled and packed 7,500 hygiene kits bound for refugee camps in Turkey. Nearly five million registered refugees have been displaced by the ongoing Syrian Civil War according to the U.N., and 2.7 million of them are registered in Turkey. While aid organizations, governments and other NGOs are doing their best to provide food and shelter to refugees, hygiene products are often an overlooked necessity, according to event organizers.

That’s why volunteers were standing shoulder to shoulder passing large clear zip bags to each other on Sunday—each individual adding an item from one of the blue bins in front of them, items that included towels, underwear, toothpaste, soap, condoms and nail clippers, all donated by New York company Henry Schein. A third of the kits were specifically for women and girls and contained reusable and washable menstrual pads, as well as whistles and hand powered flashlights for safety in the often chaotic and violent refugee camps.

Jim Mitchum, CEO of Heart to Heart International, explained that a lack of basic hygiene products among refugees can lead to dermatological problems, infections and disease. “How fundamental is hygiene? Getting clean? Feeling clean? Being clean? Brushing your teeth?” Mitchum said. “Hygiene is actually one of the most essential elements of health.”

Heart to Heart International, a non-profit relief organization, planned the event in coordination with the American Jewish Joint Distribution Committee and the Multifaith Alliance for Syrian Refugees (MFA). According to organizers, the diverse religious makeup of the volunteers was key to the event. Requests for volunteers went out to houses of worship throughout the New York Metro area, and the response was overwhelming, said Rabbi Eric Greenberg of the MFA. Organizers initially called for six hundred volunteers, but the number of pledged volunteers ballooned to over nine hundred before organizers were forced to close volunteer registration two weeks prior to the event.

“There’s a real thirst for people wanting to do something,” Greenberg said.

Safura Iqbal of Paramus, N.J.,  felt that thirst after reading reports of the Syrian Civil War, which has taken 470,000 lives to date.

“It’s one of the worst atrocities I’ve ever seen, and being so far from it, you feel helpless,” said the 28-year-old Queens native. “But I feel like every little thing does count. No matter what it is, if you can help one person that’s better than not doing anything.”

For at least one volunteer, the events of the conflict were all too vivid. Ahed Festuk is from the Syrian city of Aleppo, which has been the target of recent bombing by Russian and Syrian government forces. When the war broke out in 2011, Festuk quit her job as an accountant to become a pro-democracy activist while the rest of her family fled the country to Lebanon. She migrated to the U.S. seven months ago seeking political asylum and has been following the fighting in her home city from a far.

“When Allepo was under siege, I was just crying,” Festuk said. “I was just saying ‘I want to come back and be with my friends.’ And I didn’t come back. I stayed here.” She still tries to help anyway she can, which includes going to Times Square and handing out literature on the conflict and talking to Americans about the need to stop the bombing in Syria. She called Sunday’s event “very helpful.”

“Any help is good for them,” Festuk said. 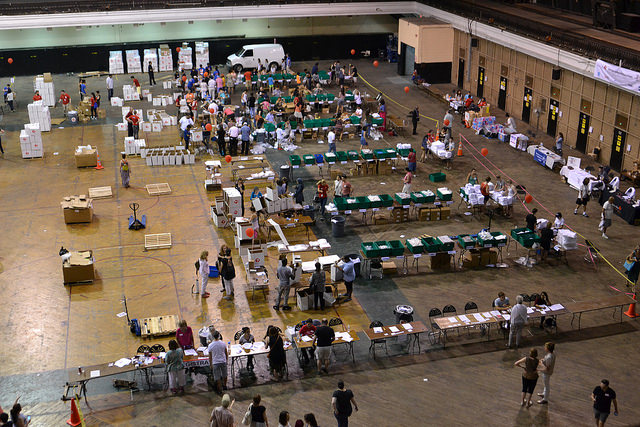