The passing of original Elvis Presley guitarist Scotty Moore this week, despite living to the ripe old age of 84, nevertheless sent shockwaves across the rock ‘n’ roll community already still mourning the deaths of several of its heroes this year.

The loss of Moore, who continued to produce, record and perform right up until before he fell ill with symptoms not exactly revealed at press time, sent a special kind of jolt through the hearts of music fans the world over, because his guitar playing has served as one of the key building blocks of the modern rock infrastructure since that fateful day after the Fourth of July in 1954 when he cut his first session with Elvis at Sun Records with producer Sam Phillips.

The King may have given rock music its swagger in the mid-’50s, but Moore gave the young genre its sense of danger with his sharp, piercing variation of the Chet Atkins style that influenced him on such priceless early Presley cuts as “That’s All Right”, “Mystery Train”, “Long Tall Sally” and that indelible walking riff on “Jailhouse Rock”.

Elvis and his swinging hips might have made millions of teenage girls swoon in the ’50s, but just as many fell in love with the pure rawness and simplicity of Moore’s guitar playing, including some of the most renowned guitar players of the last 60 years: Keith Richards, Jeff Beck, Jimmy Page, George Harrison, Ron Wood, Rick Nielsen, Mark Knopfler, Alvin Lee, Eric Clapton, Bruce Springsteen, Johnny Ramone, the list goes on forever.

Listen to the reckless abandon he uses to back Presley in his second performance at the Louisiana Hayride on August 20, 1955, and you will clearly recognize what Keef and countless others heard on the outset, that unbridled purity that made Moore’s tiny little amp sound like Neil Young’s great wall of Fenders. The strings on his Gibson ES-295 were lightning in a bottle, the spark that ignited the biggest youth movement in American history.

Like Marilyn Monroe and Mickey Mouse, Elvis Presley sadly has been relegated to a hyper-marketed image constantly displayed on anything you can put a picture on, a pretty face to sell in gift shops on the boardwalk of the Jersey Shore. But the music he created with Scotty Moore during those halcyon first five years transcends any such cheapness. It was a partnership that kick-started a revolution.

Below are five guitarists who helped me personally recognize the genius of Scotty Moore beyond the obvious aforementioned heroes.

“No Elvis, Beatles or the Rolling Stones!” Joe Strummer might have rallied on the song “1977”. But the hijacking of the cover design of that first Elvis Presley studio album for London Calling wasn’t to merely take the piss out of the then-freshly deceased King.

Much of what guitarist Mick Jones exuded in his own musicality came from Scotty Moore, whose playing influenced the Big Audio Dynamite frontman’s own style on such classic Clash cuts as “The Prisoner”, and of course their cover of “Brand New Cadillac” by Vince Taylor, an early British rock singer who himself was deeply influenced by that Presley material recorded at Sun three years before he debuted the original version of the song in 1958.

In fact, on his radio show for the BBC that ran from 1999 until his death, Joe Strummer famously played the Presley tune “Crawfish” from the 1958 film King Creole, considering the minimalist calypso performance from both Elvis and Scotty to be one of his favorite tunes.

As much as punk rallied against the rock establishment in the ’70s, it did so by returning it back to its pure primal instinct, much of which begins on the strings of Scotty’s Gibson.

Excluding Neil Young’s failed foray into the format in 1983, nobody shy of Robert Gordon’s run in the new wave era carried the torch for rock ‘n’ roll’s birth years like The Stray Cats. And Massapequa’s Brian Setzer was their pompadoured guitar hero who gave his roots in early Elvis a sense of dash and daring on par with his fellow Long Island axe masters Joe Satriani and Steve Vai.

In the early 2000s, Setzer debuted his powerful greaser-garage trio the ’68 Comeback Special, where he was able to emulate Elvis and Scotty as one human being. Nobody before or since can do it better than Setzer.

The problem, it seems, with being as excellent a pop songwriter as Alex Chilton was, sometimes the other aptitudes one might possess tended to be overlooked. Such is the case for the Box Tops/Big Star icon’s incredible guitar playing, which never sounded more directly planted in the school of fellow Memphis icon Scotty Moore than his time moonlighting as the lead guitarist for Tav Falco’s Panther Burns in the late ’70s/early ’80s.

Recording and performing under the thinly veiled pseudonym LX Chilton, songs like “Bourgeois Blues” and a scorching cover of The Yardbirds’ “Train Kept A Rollin’”, Alex took the template of the classic Moore solo and turned it sideways, bringing a coiled sense of angularity to the rudimentary rockabilly format. And by being in the background while Falco worked his magic on the frontline, it allowed Chilton the guitarist full reign to cut loose with a sense of sheer freedom you knew Scotty was feeling when he peeled off that solo on the old Big Mama Thornton barn burner “Hound Dog”.

Speaking of Alex Chilton, The Cramps cut their first 45 with the man himself at Sun Studios in Memphis, delivering a cover of The Trashmen’s “Surfin’ Bird” with “The Way I Walk” on the flip, both of which would appear on their Chilton-produced debut EP Gravest Hits (which was largely crafted at nearby Ardent).

Recorded a good 10 years before the studio was officially reopened for business in 1987, the ghosts of the dormant Sun were indeed strong in the essence of that 45, especially in the playing of guitarist Poison Ivy, who takes the Scotty Moore model of soloing and methodically claws its eyes out by sounding like she’s taking scissors to the strings while the guitar’s still plugged in.

That instrumental interlude during “Surfin’” that kicks off around the 2:44 mark has got to be the most extreme thing ever put to tape at Sun, an invasion of New York City punk ethos right in rock’s birthing room, and emerging with the creation of its own baby—‘psychobilly’—in the process.

“I’ve got the Scotty Moore No. 1 guitar,” proudly proclaimed “Filthy” Phil Campbell, the longest serving guitarist to play at the side of Lemmy in Motorhead, and now sadly the sole surviving member of the legendary heavy metal band’s classic lineup, as both Lem and Phil “Philthy Animal” Taylor passed away in 2015. “They only made 12 of them and mine is the No. 1. I’ve got a Gibson 125 from 1961 which is really nice.”

Perhaps no other album in the Motorhead catalog better exemplifies the loose but wild role Scotty’s playing might have had on the Welshman nicknamed “Wizzo” than 1991’s 1916, an album often overlooked for the likes of Ace of Spades and No Remorse, but it deserves a place right alongside them as the cream of their catalog.

Campbell’s riffs on tracks like “I’m So Bad (Baby I Don’t Care)”, “Angel City” and the thrashing “Shut You Down”, in particular, greatly benefitted from Lemmy and Phil’s shared love for not just the speed and intensity of rockabilly, but its shake appeal as well. Meanwhile, the late Kilmister would take his love for early Elvis even further with his trio The Head Cat with guitarist Danny B. Harvey and Slim Jim Phantom of The Stray Cats on drums.

If you slowed down the breakneck velocity of Motorhead right up until the very end, you’d hear some serious elements of Elvis ’56. 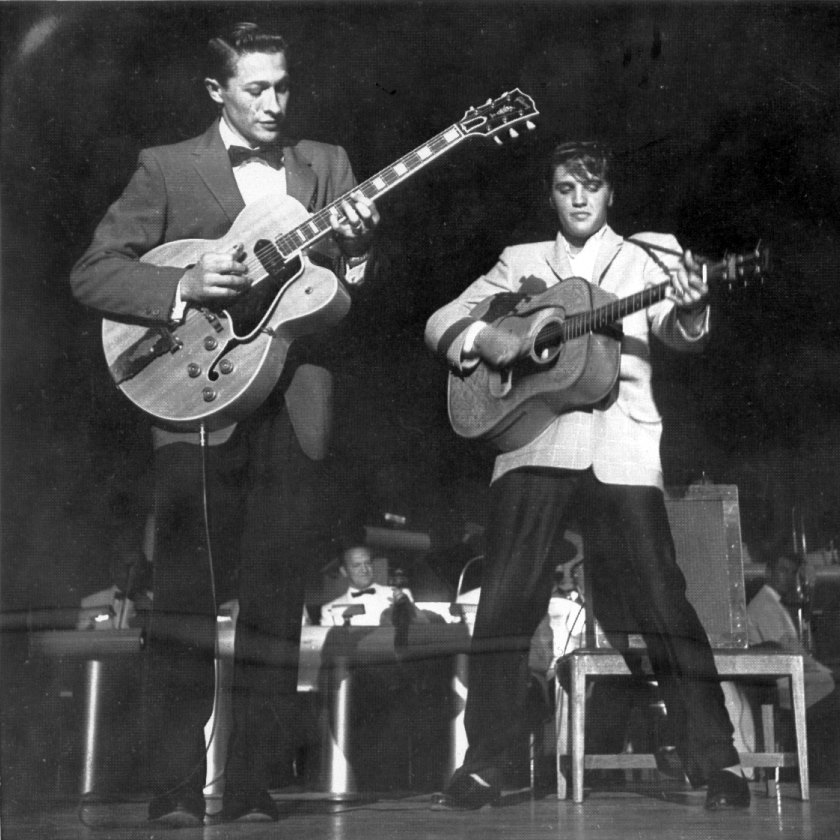