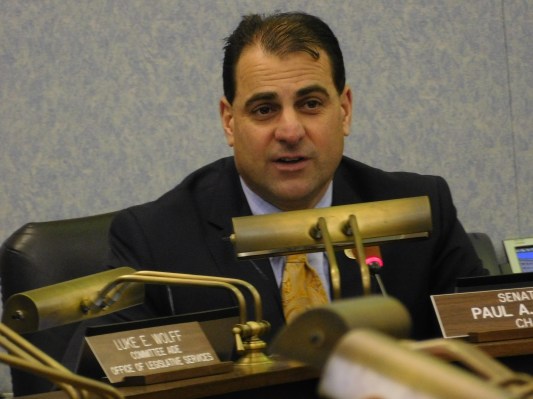 TRENTON — A package of bills to cut certain taxes in exchange for a gas tax increase cleared a Senate committee Thursday. The measure would phase out New Jersey’s estate tax over five years and lower the threshold for tax-exempt retirement income in a bid to persuade state Republicans to allow an increase of the state’s low gas tax rate and fully fund the ailing Transportation Trust Fund.

The bipartisan package from Senators Paul Sarlo (D-36) and Steve Oroho (R-24) would also increase the $1.6 billion Trust Fund to a round $2 billion, and include jet fuel in that tax hike. The Trust Fund is slated to run out of money June 30 if state Democrats can’t reach an agreement with Governor Chris Christie, who has called for “tax fairness” as part of any TTF deal.

The bill would create a 12.5 percent petroleum tax and a 4-cent-per-gallon surcharge for diesel fuel, capping those taxes on wholesale gas at three dollars. That would translate to an expected 23-cent increase at the pump.

In discussion before the vote, Senator Jennifer Beck (R-11) said she opposes many aspects of the bill, partly because of the economic consequences an increase in the price of jet fuel could have for the state’s airports. Beck argued that the legislation would make Newark International Airport, the country’s largest, into its most expensive.

“I don’t think that you raise taxes to lower taxes,” Beck said, citing the potential for the tax increase to make the state less livable for people living in poverty and “the ancillary effect on the cost of food.”

Beck voted against the bills along with senators Sam Thompson (R-20), Anthony Bucco (R-25) and Jeff Van Drew (D-1) when it advanced that evening. After the vote, Beck raised her voice and accused Sarlo of not giving her own proposal to fund the Trust Fund without a gas tax increase a fair shot.

“Just because you didn’t support it, does not mean it could not be done,” she said.

The bills also had critics on the left, with New Jersey Policy Perspective president Gordon MacInnes and New Jersey Sierra Club president Jeff Tittel testifying against it. MacInnes argued that everything from property tax relief to funding for higher education and public pensions will suffer if the tax cuts go into effect.

“Pick your big problem: rising property taxes and shrinking relief; declining support of  New Jersey’s public colleges and universities leading to higher costs and greater student debt; higher transit fares for worsening service; the state’s failure to honor its financial commitments to workers and retirees; record levels of inequality and poverty,” MacInnes said. “The proposed tax breaks may push a Transportation Trust Fund deal over the finish line, but only by sacrificing the state’s financial capacity to address these issues.”

“The tax cut is permanent while the TTF funding is only for ten years,” Tittel said in his testimony. “We’re going to be back with TTF problems in a decade. These cuts will threaten important programs for everyday people from education to environment. This is a bad deal; it’s like when the Red Sox traded Babe Ruth to the Yankees.”

“Many New Jerseyans, including our retirees, can no longer afford to live here due to high taxes and high housing and healthcare costs,” Siekerka said. “Raising the pension and retirement income tax exclusion will make this income virtually tax free for thousands of New Jersey middle-class retirees. Combined with the estate tax phase out New Jersey residents will be more likely to stay here, near their families, rather than moving to more tax friendly states.”