TRENTON — Senate lawmakers from both sides of the aisle detailed a suite of bills at the State House Monday, saying that they are confident the legislation’s offer of a gas tax hike alongside a phase-out of New Jersey’s inheritance tax and new tax write-offs for charitable contributions will go a long way toward funding the depleted Transportation Trust Fund with a minimum of partisan rancor.

“Everybody think that we’re raising a tax. Actually what we’re doing is we’re shifting so that 30 to 40 percent of that can be picked up by those who should be ,” Oroho said of the share of gas tax revenue that would come from out-of-state drivers.

Kyrillos hedged his support for the Democrats’ plan with a call for further-reaching changes to the state’s tax structure to stop tax flight.

“We shouldn’t really be congratulating ourselves. The state government really deserves a lot of blame, the we over many many years have allowed New Jersey to get to this uncompetitive place where we lose companies, we lose people, we lose jobs” Kyrillos said after praising the Democrats’ bills.

Under the plan, the gas tax would increase from 14.5 cents a gallon to 37.5 cents a gallon and the TTF itself would be increased from $1.Z billion to a round $2 billion. The estate tax would be phased out over a period of years, while the state Earned Income Tax Credit would see a boost to 40 percent and the tax exemption threshold for retirement income would go up to $100,000 for couples. The bill would also introduce new tax deductions for charitable contributions and the gas tax itself.

Governor Chris Christie has called for “tax fairness” to be metric for any trade-off leading to an increase in the state’s gas tax, which is one of the lowest on the east coast. The TTF pays for repairs and new construction for the state’s transportation infrastructure, and stands to run out of money this summer if Christie and the legislature can’t reach an agreement.

Though Christie has called the three-year phase-out period proposed in Sarlo’s bill too long to provide adequate relief to high-earning taxpayers, Sweeney said he believes the governor will see the wisdom of the plan.

“We can’t afford to not address this need,” Sweeney said. “I want to applaud Senators Sarlo and Oroho for their work on this comprehensive plan and praise all the legislators for demonstrating the political strength to take the actions that are in the state’s best interests. We will work to get the job done.”

The lawmakers shied away from reporters’ questions about a potential override vote if Christie vetoes the package. When Kyrillos said “nobody likes that” of the potential gas tax hike, Weinberg quickly corrected him to laughter.

“A readjustment of fees,” she said. 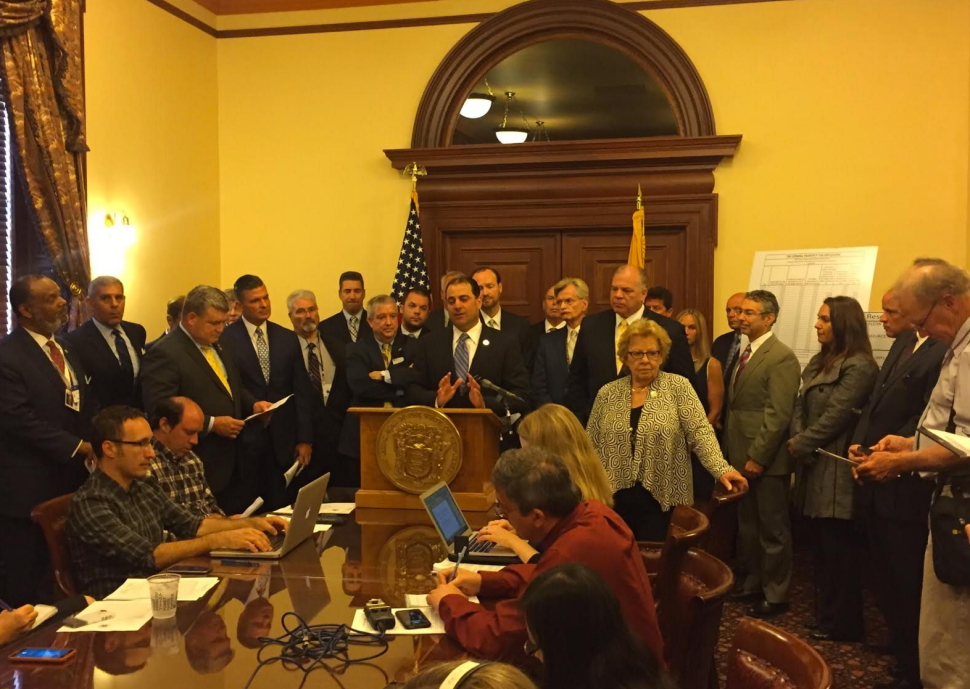