Hillary Clinton’s remark that the Kremlin would “celebrate” if  Donald Trump wins the race for the White House was met with sarcasm from the Russian President’s press secretary. “What would be the motive for such celebration?” Dmitry Peskov asked coldly—although Clinton was telling the truth. Indeed, plenty of Russians want Trump as the next U.S. president, hoping his pledge to ease tensions and to improve relations with Russia was made for reasons beyond simply annoying Washington. Trump also said he liked Vladimir Putin.

According to polls conducted by the Russian Fund for Public Opinion last week, 22 percent of Russians have a favorable opinion of Trump while roughly the same number—23 percent—have negative views of the American billionaire, and 28 percent of Russians think Trump’s victory would benefit U.S.-Russian relations.

One Russian man, 75-year-old Felix Kolsky from Nizhny Tagil, sent a letter to Trump offering him his entire life savings of 100,000 rubles ($1,500) which he had been planning to spend on dental prosthesis. “I could live without teeth if there would be no war. Look at Hillary, it’s clear—she is ready to storm Russia tomorrow!” he said. (Kolsky has yet to receive a response from Trump.)

On the flip-side, and only nine percent of Russians think a Clinton victory would improve relations between the world’s heavyweights. Putin once famously said that Clinton “had never been delicate in her statements” about him, adding, it was “better not to argue with a woman.”

In fact, both the Russian political class and the Russian public prefer a fresh start with Trump over another doomed-to-fail “reset” from the former U.S. secretary of state.

Last April, in an annual press conference with his countrymen, Putin expressed skepticism about the American electoral process, which he believes has degenerated to a simple change of family clans in the White House. He also hinted as to how he personally saw Hillary Clinton.

“First, there was Bush senior in power, then Bush junior. [Bill] Clinton was [U.S. President] two times in a row, now his wife has ambitions. Again, the family might stay in power. As they say in Russia, a husband and a wife are the same Satan.”

And Hillary Clinton is Satan for many Russians.

Older generations blame Hillary’s husband Bill for the devastating collapse of the Russian economy during the 1990s. Younger generations have formed opinions about Hillary Clinton from Russian media, which declared a war of such heated intensity on Clinton that it seems they know for a fact she will win the race for the White House and feel no need to waste time on phony pleasantries.

She is a hawk’s hawk and there is no difference between her and her male counterparts.

She is as tough as a man and her womanly appearance shouldn’t fool anyone, NTV channel informs viewers. Hillary Clinton once drank vodka with John McCain when, despite their differences, he challenged her to a drinking contest. No, McCain didn’t win. Hillary agreed to stop the contest only after it became clear that there would never be a winner.

“[We were drinking] until we both, I think, agreed to withdraw in an honorable fashion, having reached the limits that either of us should have had,” she said.

What happened when Hillary and John McCain went head-to-head in a drinking competition?https://t.co/Iki0m7RS0k

As far as campaign finance is concerned, Hillary Clinton is unscrupulous and corrupt—her election was paid for by foreign oligarchs, another major Russian network reported in its Vesti news program. The most generous contributions to the Clinton Foundation—around $10 million—came from the impoverished and robbed Ukraine, influencing her attitude toward what had been going on in the country.

This might explain why neither the old corrupt Ukrainian government nor the new corrupt government haven’t hurt Viktor Pinchuk’s business interests, said Sergei Markov, Russian politician and Putin’s confidant. “I think that Ukrainian oligarchs were trying to bribe Hillary Clinton—especially at the time of Maidan, when she was the State Secretary,” he explained.

But Clinton doesn’t discriminate in her dishonesty. She also received funding from Saudi Arabia, which contributed $7 million to the Clinton Foundation. And in the beginning of June, RT—the Kremlin’s mouthpiece—reported that, while promising to fight the Wall Street, Hillary Clinton received $675,000 for one speech from Goldman Sachs… the same Goldman Sachs from whom her husband received $1.5 million.

According to tabloid Komsomolskaya Pravda—which has the largest circulation among Russia’s printed newspapers—Hillary Clinton is a despicable human being, an abusive person and has a history of domestic violence. Once, during Monica-gate, she gave her husband a black eye which was later explained to reporters as an “allergy” to coffee. In completing a well-rounded picture of Clinton, Komsomolskaya Pravda profusely quotes former White House Secret Service officer Gary Byrne’s book Crisis of Character: Hillary is impulsive, prone to sycophancy, despises laws and rules—believing they are written not for her but for “small people.”

She is nepotistic, continued the tabloid—she promised to return her husband into the White House. She is a hypocrite: despite protesting the Vietnam War stop still supported bombing Libya in 2011.

“And, by the way,” the tabloid told readers, “smart and cruel” Hillary is bisexual—a revelation substantiated by the words of Gennifer Flowers, Bill Clinton’s former lover. “Bill told me that he knew that his wife was bisexual, but it did not bother him. According to him, Hillary had had more women than he.”

Further supporting the allegation, the tabloid quoted yet another one of Bill Clinton’s girlfriends, Sally Miller, who said in an interview with a British newspaper that Bill, playing his saxophone, told her Hillary preferred lovers of her own sex. Also, she used drugs often—otherwise such ‘ideas’ didn’t come into her head—Sally said.

But this isn’t just slander from jealous former lovers, assured the Russian tabloid.

“In March of 2013 hackers broke into Hillary’s email. As it turned out, she used the account for personal correspondence of such a nature that even the most unbridled Liberals would have shyly hid their eyes.” The Russian tabloid insisted her hacked email proved the relations between Clinton and her aide Huma Abedin—whose three relatives, by the way, belonged to the Muslim Brotherhood—were far from being platonic. To hide their intimate friendship, a fake marriage with a scandalous New York politician was arranged, the tabloid asserted.

No, obviously, the Kremlin will not celebrate Clinton’s victory—but it has prepared itself and its citizens for such an outcome of the U.S. presidential race.

According to the aforementioned poll, about half of Russians (46 percent) have an unfavorable view of Clinton—regardless of her plans to become the first female U.S. president.

Still, there is some work to be done by the anti-Clinton Russian media-machine, as 10 percent of Russians still have no opinion about Clinton, 36 percent have no idea who she is and eight percent of them have a positive attitude toward Mrs. Satan. 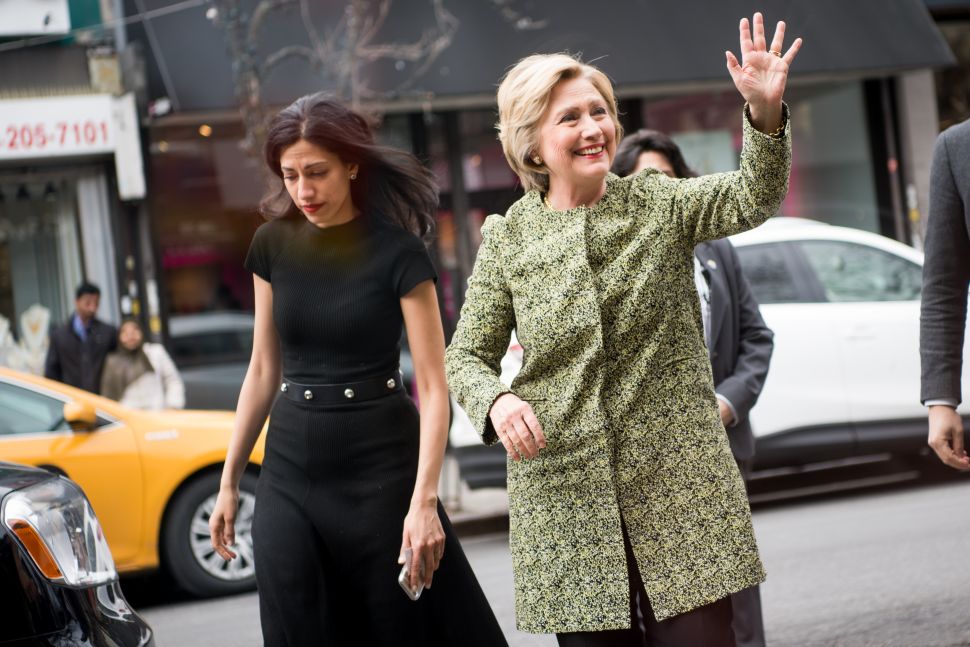