You might call On Site Opera’s production of The Marriage of Figaro “Sing No More,” because its immersive performing style recalls that of the long-running off-Broadway hit Sleep No More. But, on second thought, that’s not such an accurate description. This lively young cast was so irresistible that you wouldn’t ever want them to stop singing.

For this site-specific staging of a romantic comedy set in Count Almaviva’s palace, On Site took over the arguably palatial event space 632 on Hudson, wedging performers, a mini-orchestra and an audience of about 50 into various and different rooms for each act. An antique kitchen represented Figaro and Susanna’s servants’ quarters; later, a luxe Art Deco parlor stood in for the Countess’ boudoir. For the pivotal wedding scene on Wednesday night, we trooped into in a spacious atrium to be seated in fancy cane-back chairs festooned in white tulle.

As if the production style were not novel enough, the music was also new…or at least utterly unfamiliar. Instead of the standard Mozart/Da Ponte opera, On Site served up the North American premiere of an alternative take, Marcos Portugal’s 1800 setting of a libretto by Gaetano Rossi, further adapted with English lyrics and dialogue. Though Portugal’s music cannot rival the genius of Mozart’s (whose can?) the score is pleasant and tuneful with a piquant Mediterranean tang entirely suitable to the opera’s Spanish setting.

One slight but interesting difference in emphasis notable in Portugal’s version is a strong focus on the two leading male characters of the piece, the lustful Count Almaviva and his antagonistic servant Figaro. Appropriately, these two roles boasted On Site’s strongest casting. Tenor David Blalock made a powerful case for the Count’s vigorously florid vocal writing and projected the disturbing sense of fratty entitlement of a grown-up Patrick Bateman.

In contrast, Jesse Blumberg’s honeyed lyric baritone created a vulnerable, boyish Figaro you could easily believe the Count might crush like a bug. The happy denouement for once seemed not the product of force of will but simple good fortune, a curiously satisfying conclusion.

If the leading women’s roles are less grateful musically, they do offer strong theatrical values for the melancholy Countess and her resourceful lady’s maid Susanna. As the noblewoman, Camille Zamora had only a brief lamenting aria to show off her tawny soprano before she plunged into the intrigue plot, but at least she got to show a bit of spunk, unlike the hapless victim the character so often seems in stagings of the Mozart opera.

Jeni Houser’s sparkling performance as Portugal’s Susanna, funny and human with nary a trace of forced cuteness, suggests she could have a triumph in Mozart’s richer realization of the character. Though she flung out the brittle roulades of her elaborate last act aria with nonchalant ease, the soprano’s musicality and charm made me long to hear the simple, golden phrases of “Deh vieni non tardar” in the Figaro we all know and love.

Also rollicking through the rooms of 632 on Hudson was soprano Melissa Wimbish, a slender-voiced but ideally androgynous Cherubino. (At one point she switched genders by simply removing a pair of Jackie O sunglasses.) Met veteran Margaret Lattimore boomed out the brief role of the Figaro’s long-lost mother Marcellina, wittily playing the would-be queen bee as Joan Collins by way of Kohl’s.

Eric Einhorn’s whirlwind staging included plenty of fine detail suitable for viewing at arm’s length, and Geoffrey McDonald kept the music not only precise but also breezy. He was particularly effective in the opening scene in the kitchen, when he conducted with little more than a few shrugs and a raised eyebrow.

Obviously not every small company in New York can achieve On Site’s level of polish, but Chelsea Opera’s Suor Angelica on Thursday was sloppy by any standard. In the title role of a nun mourning her dead bastard son, soprano Megan Nielson hurled out some formidable loud high notes but choked on the more important pianissimo tones. As her implacable aunt, mezzo Leonarda Priore, bizarrely styled as Joan Crawford circa Female on the Beach, bellowed her cameo role gutbucket style. The production by Carol Wilson at Christ & St. Stephen’s Church was a pretentious jumble, but the orchestra, even in a peculiar piano-heavy reduction, achieved a mellow tone that utterly eluded the chorus and soloists.

In contrast to On Site, this is a company you want to tell to sing no more. 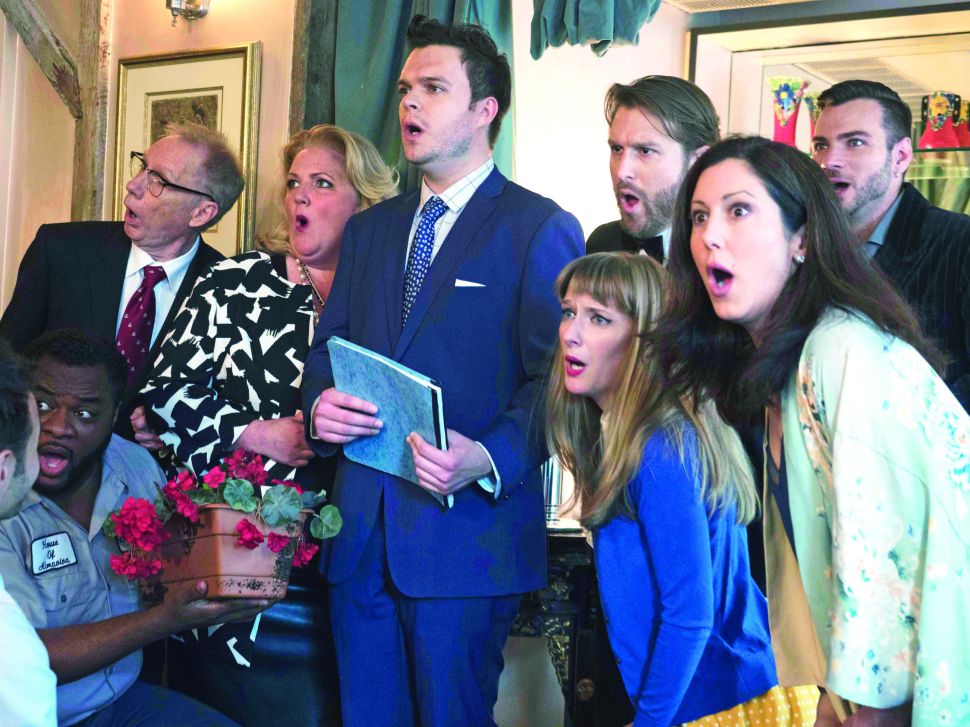