On September 5, 2001, Sergei Zaloukaev, an East German born Russian national who had emigrated to Washington DC roughly ten years earlier, was on vacation with his girlfriend in the Outer Banks of North Carolina. They were swimming in about 6 feet of near the town of Avon when they were both attacked by either a bull or tiger shark. His girlfriend lost a foot and Mr. Zaloukaev perished. Two days earlier, David Peltier, 10, died in a similar attack 130 miles north along the shore of Virginia Beach.

The shocking attacks— both occurring so close to the nation’s seat of power and more than a month after Time Magazine had declared 2001 the “Summer of the Shark” in a July cover— gipped the nation. So much so that Time Inc. had every intention of dipping back in to those shark infested waters by putting the east coast attacks on that week’s cover of People.

That issue was set to close the morning of Tuesday, September 11. After the attacks on the World Trade Center and the Pentagon, editors redid the cover. (The 9/11 issue remains the celebrity news weekly’s all-time bestseller). No one ever spoke of the “Summer of the Shark” again.

The truth is, the real “Summer of the Shark” was, is and will always be 1975. That June, the world started standing in line to see a Great White named Bruce stalk Roy Scheider, Richard Dreyfuss, and the residents of Martha’s Vineyard in Jaws.

You see, shark terror— like the string of summer blockbusters kicked off by the Spielberg classic— is largely an invention of the pop culture economy, and a frequently profitable one. How else to explain the fact that our nation faces its 28th Shark Week when the latest installment Discovery Channel institution kicks off this Sunday June 26? Before that, on Friday June 24, an exceedingly famished Great White returns to the same movie theaters where our national shark fear was first seeded, terrorizing Blake Lively in The Shallows.

The official trailer for The Shallows.

But while shark terror continues to make entertainment executives giddy, it is one of those phenomenons that drives economists, statisticians and other people concerned with hard data and rational thought a little batty. (Sure enough, statistically there were no more shark attacks during 2001’s “Summer of the Shark” than any other summer.)

“The fear associated with shark attacks is not grounded in probability,” says G. Dirk Mateer, Ph.D. the Gerald J. Swanson Chair in Economics Education at the University of Arizona. “There are many more deaths each year from people who take selfies and meet their demise that way than from sharks attacks.”

Adds Mr. Mateer, “From a traditional economic perspective, we expect people to be rational enough to figure out what truly matters from what doesn’t. However, behavioral economics says quite the opposite. People have fears that are not rational and Sharknado hits on those fears perfectly.”

Pop culture tends to let the sharks loose during periods when a shaken nation is looking for something supposedly terrifying to take its collective mind off of what is truly terrifying.

Take the original Sharknado, which laid waste to our Twitter feeds (though not necessarily the TV ratings) in the summer of 2013. While the 2008 recession had supposedly ended four years earlier, it did not feel that way to most Americans; meanwhile the War on Terror was in high gear, as it still is. As the economy continues to improve, ratings for Sharknado sequels seem to go in the opposite direction. (Like Punxsutawney Phil’s shadow, we may be able to tell the length of our economic winter by spotting the numbers pulled in by Sharknado 4: The 4th Awakens, which premieres on Syfy July 31).

More than four decades ago, the Jaws summer hammocked a winter where a disgraced President’s top aides were sentenced for their part in the Watergate scandal, and a fall that featured two assassination attempts on President Ford in the same month. Of course all anyone was thinking about that summer was how difficult it was to fill the gas tank due to the oil embargo.

“Jaws has often been seen as a not so subtle commentary on the Watergate,” says Jim Lane, Senior Scholar-in-Residence for the department of Visual and Media Arts at Emerson College Los Angeles. “The film efficiently exposes dubious motivations on the part of public officials.”

Shark Week has been inundating entertainment journalists with delightful swag since it first launched 1988. Unsurprisingly, that was an election year, like this one. While the Discovery Channel scored franchise-creating numbers with such shows as Caged in Fear, the Bush campaign was making a furloughed prisoner named Willie Horton out to be a much more terrifying and ubiquitous monster from Massachusetts than Bruce the Shark could ever hope to be.

This week, The Shallows brings a new wrinkle to our collective pop culture generated shark panic, paring things back to the point where the conflict is essentially wo-mano e sharko. The movie serves as a kind of hybrid, a mix between 1999’s underrated Deep Blue Sea (the borderline camp classic still feature cinema’s all-time greatest Samuel L. Jackson death scene) and James Franco’s solo, man against the elements survival story 127 Hours. The Shallows features a lithe, male-gaze-y Blake Lively as Nancy Adams, a med school drop out on a soul searching tour of Mexico, stranded variously on a whale carcass, rock and rusty buoy while being stalked by a Great White.

While lacking the super intelligence of Deep Blue Sea‘s medically enhanced mega-predators, The Shallow‘s shark makes up for it with sheer determination and ravenous hunger. (Like a Vegas buffet goer, the beast seems hardly satiated even after feasting on most of a grey whale and a handful of locals.)

The thing is meant to be a metaphor for the cancer that recently claimed the life of Nancy’s mom in the movie’s backstory. Or perhaps it serves as a stand-in for life’s relentless challenges that we mustn’t give into. Or maybe it is just there to take our minds off an election that is freaking all of us out, and give us solace for a second or two— long enough to grasp our neighbor’s arm in delightful, statistically-unlikely terror.

“What strikes me as odd is that this fear is completely avoidable— just stay out of the ocean,” explains Mr. Mateer, with just a dollop of incredulousness. “Sharks are a distraction and not substantive news. Still, people enjoying chatting about shark attacks. It takes our minds off of the uncomfortable realities of life.” 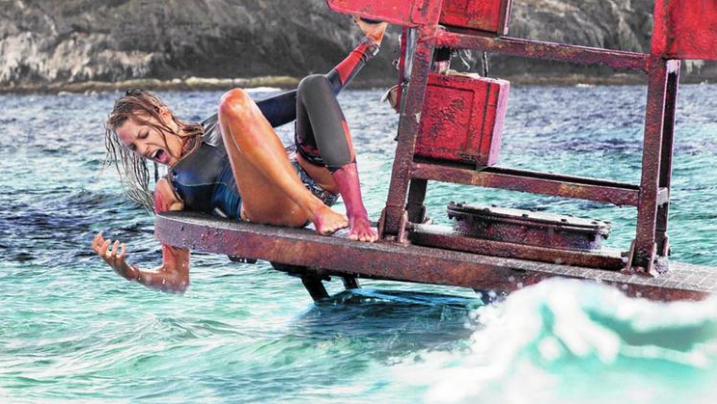