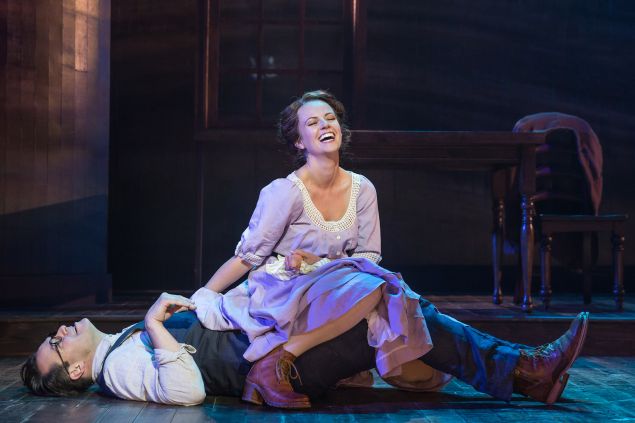 Himself and Nora. Photo: Matthew Murphy.

If anyone in their right minds ever thought the dismal life of Irish poet-novelist James Joyce was the perfect subject for a musical, they were wrong. For unsingable (not to mention unspeakable) evidence, witness an exercise in atonal somnambulism called Himself and Nora. It’s in Greenwich Village at the Minetta Lane. Head for the nearest exit.

This excruciating bore paints the unsavory picture of an obnoxious buffoon whose hatred of the Catholic church drove him from Galway to Dublin in his native country, where his vivid prose was rejected and denounced as outright pornography, to exile in Trieste, Paris, and finally Switzerland, where he died, blind and drunk, in 1941, accompanied by his long-suffering lover, a hotel chambermaid named Nora Barnacle. The long-winded show begins in 1905 when Joyce wails, “I walk the streets of Dublin searching for you and your love” and Nora retorts, “If I transform you, what will do for me?” All she wants in return for following him around Europe while he tries to find himself is equality, which begins with a legal wedding to make their union respectable. It never happens. She follows him anyway, leaving behind her beloved country, church and shamrocks. Exchanging one Catholic tyranny for another, he gives her two children in Italy but no band of gold.

Numbingly directed by Michael Bush, the show drags on while Joyce writes epics like Finnegans Wakeand Ulysses, which, as you can well imagine, are better read (sort of) than sung, but he can’t get them published anyway. Plagued by obscenity laws everywhere until Ezra Pound persuades him to try Paris (“In the final analysis, Paris is just more callousness,” he warbles), Joyce finally gets stuff into print, but the ban on Ulysses rages on in his homeland and in America. It takes 27 years for him to finally marry Nora, but the show seems to take even longer. In the end, Joyce became a blind egomaniac who shamed his bastard children and disgraced the woman who was his muse. While his son Giorgio (who also confusingly plays the hated family priest) flees Zurich to escape the Nazis, and his schizophrenic daughter Lucia (who also plays Joyce’s mother) is packed off to an asylum, the sadistic doctors subject Joyce to 10 antediluvian surgeries on his eyes without anesthesia, using leeches on his eyeballs to relieve the pressure. Great stuff for a musical, huh? When the indestructible “Himself and Nora” finally tie the knot, they sing:

“Though forever could end very soon,

The next morning a priest crashes the morning-after bedchamber, waving a piece of paper: “Cablegram from New York, Mr. Bennett Cerf.” For the first time in two hours and 15 minutes, the audience collapses in laughter. Are they kidding? Rhyming “analysis” with “callousness” is bad enough, but the ghastly book, music and lyrics by Jonathan Brielle include such treasures as “The pain of her vomit—green taffy candy. Syphilitic Catholicism racking her supplicating stomach, spleen, spine, soul. Free myself of priest-ridden Ireland!”

Under happier circumstances, Matt Bogart could be a smashing leading man. He cuts a fine figure and moves with ease, and crystal-voiced Whitney Bashor sings with beauty and grace. But as “Himself and Nora,” neither has been directed to display much character, strength or diversity. The rest of the cast, playing myriad roles, provides the best indictment of the hopelessness of multiple casting. For shows about Ireland, one nostalgically conjures fond thoughts of better days and more tuneful musicals such as Johnny Burke’s Donnybrook! and Marc Blitzstein’s gorgeous Juno. But give me a break. When the cast of a dog like Himself and Nora belts out “When they castrated Ireland, England ate our balls/’T’was the church gave them the platter, Testicles and all” you just have to shed a tear for the decline of the American musical theatre and make a beeline for the elevator. 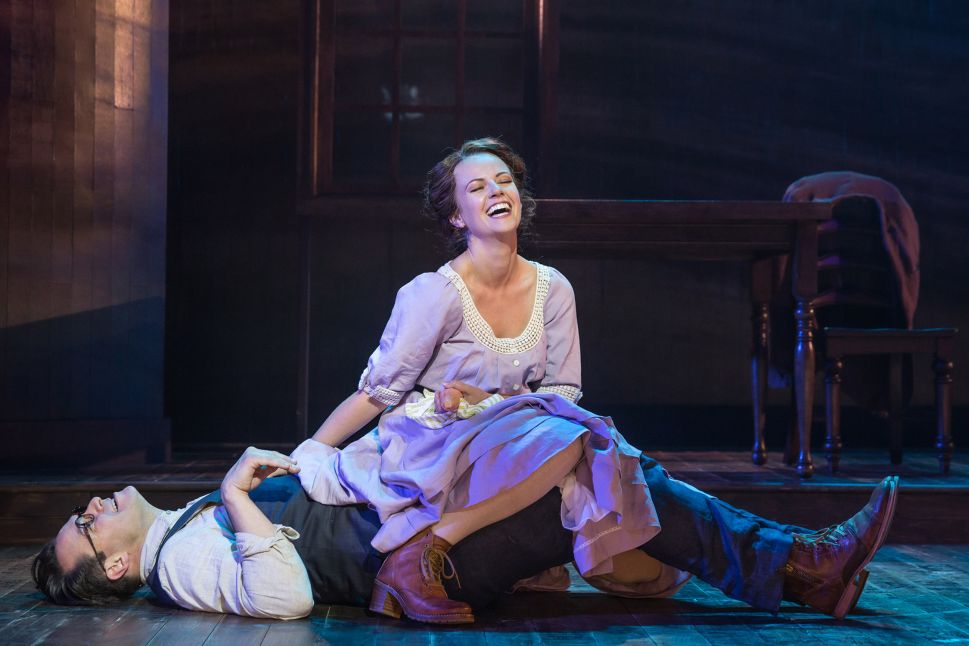