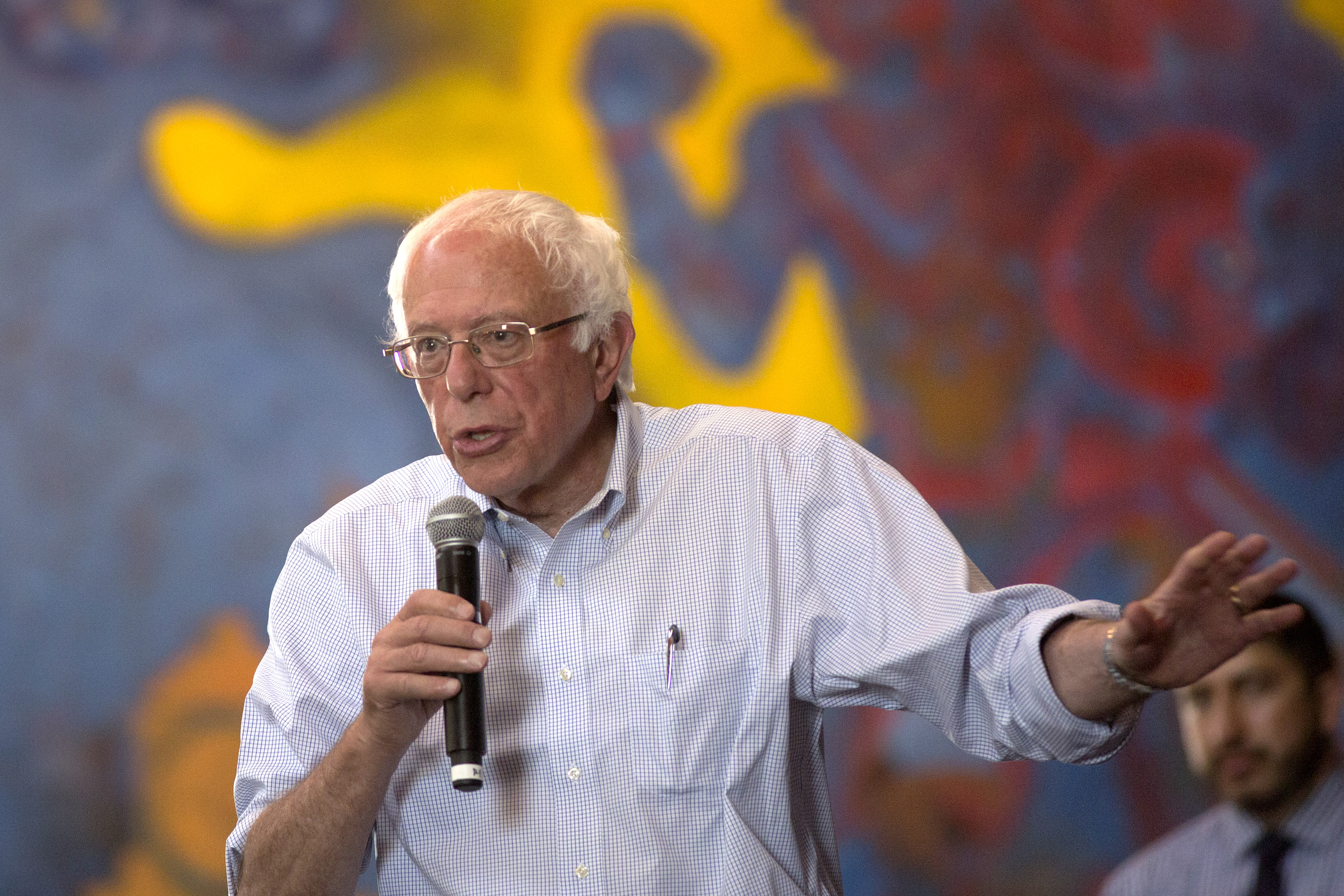 Bernie is officially in the bunker.

As the Democratic primary of 2016 finally—when did it start, actually, 1916? 1816?—grinds to an end, Sen. Bernie Sanders of Vermont and his campaign have officially hit the rails. The campaign has not just spun out: out of ideas, out of leadership potential, and out of ways to win—it’s also spun wildly out of control.

What started as a call to action for a more perfect union by mandating an end to income inequality, a clear clarion to abrogate money in politics and return to a purer democracy, has burped up a toxic sludge of recrimination and bitterness that make one of Sarah Palin’s slurring, dystopian tirades look like the pure prose of Joyce or James. It’s bitterly ironic. Because if the Sanders campaign’s reveille was among the highest-minded moral entrances onto the national stage in decades, its taps are nothing short of political torture porn—like if Primary Colors had a baby with Saw IV. Sad to see so much progressive possibility crumble.

Yet, there’s no question that a system of choices by what sources reveal are an increasingly obsessive and bitter Sen. Sanders himself and his strategists’—led by Jeff Weaver—burn-it-all-down mentality has defined the final gasps of the primary. You have to want it this way and clearly, they do. If that’s the legacy he wants, have at it—once Weaver goes back to his comic book shop and Jane Sanders, for her part, goes back to bankrupting small liberal arts colleges. Because Sanders risks being an absolute pariah in the Senate for the rest of his public career. That Wednesday caucus lunch is gonna be AWKWARD.

I don’t care if he eats lunch alone for the remainder of his career. His problem. But I do care that he’s playing right into the sweaty, impatient hands of Donald Trump, who is counting on divisions on the left and doing everything he can to exacerbate them—that is, when he isn’t busy engaging in some of the most egregious race-baiting this side of George Wallace. And while every toxic step should disqualify Trump and knock him back further, infuriatingly, every time Trump shoots himself in the foot there’s Bernie Sanders practically reaching out with a helping hand by continuing to not campaign for himself, but against Hillary Clinton.

Trump says jump with a suggestion of a sham debate, and Sander rips a page out of the Ted Cruz playbook and says, how high? Check.

Repeating right-wing, Trey Gowdy-driven attacks on Hillary Clinton for her email server, when national security wasn’t breached, no laws were broken and she’s not running for president of Dunder Mifflin? Check.

Treating the Clinton Foundation, which has improved and saved millions of lives as a suspect, shadowy organization that deserves scorn? Check.

As Wilson Phillips so memorably said, “hold on for one more day.”

This is the garbage we expect from Fox News and talk radio. While this may engage core supporters, it doesn’t grow or serve his campaign—though it should be noted that a campaign that narrows its focus and exists in its own echo chamber is not a winning one. However, what it does do is bruise Hillary Clinton, who is poised to clinch the nomination tomorrow. She has, wisely, focused her attention over the last several weeks firmly on Trump and is making headway and getting under her opponent’s thin skin. But she can’t beat him as effectively as she should be able to while she’s under frenemy fire from her left flank and Sanders lands punches. Worse? Every time Sanders attacks now, it will be used as ammunition by Donald Trump or his allies later.

Come to think of it, Sanders hasn’t mentioned economic or social justice in weeks. Instead, his swan song will have focused solely on playing to his base with red-faced, paranoid tirades insistent that the race has been rigged, manipulated and somehow stolen from his gullible supporters in plain site and against their will. The reality? Democratic campaigns that don’t engage the diverse contemporary Democratic coalition don’t win. Period. Divisive, negative campaigns based on grievances—at least on the Democratic side (they are 100 percent effective on the right)—don’t win, either.

Most people, thank God, have no interest in drinking laced moral Kool-Aid and dying, superior yet alone, in the jungle.

Let me be clear: I don’t expect much from Donald Trump. In fact, I’ve expected just what I’m getting and his blunt-force, unstable toddler race to the bottom isn’t a shock. I also don’t expect much from right wing candidates as a whole, who at this stage at the end of the Obama era are, with pitiably few exceptions, one small step up from the kind of group that the Southern Poverty Law Center puts on warning lists.

But I have been a proud Democrat my whole life, ever since my father taught me in 1980 about the good guys and the bad guys. It’s something I take seriously. It’s personal. That’s why my standards, my expectations, are so high for Democrats—or, blah, blah, blah those who caucus with them—which is why the tactics of the Sanders campaign have been such a profound disappointment. What a let-down. But I am happy to say that Democratic leaders are far more mature and open minded than Sanders and his supporters, and that the good DNA the senator offered up and caught fire in the first place will be central to the party platform in July—that very party, ironically, that he’s been trying to destroy for the past few months. Regardless, the substance he brought to the race is extraordinarily important and its inclusion is a net positive for the party and the country. Onwards.

But, thank God, it’s almost over. As Wilson Phillips so memorably said, “hold on for one more day”: because the day after tomorrow, this ends. After big wins in the Virgin Islands and Puerto Rico, Clinton is within a handful of delegates—under 30 by my count—that she needs to cross the finish line. At 8 p.m., the moment the polls close in New Jersey on Tuesday, one phase closes and another begins. Hillary Rodham Clinton will finally vault across the threshold to become the Democratic Party’s presumptive nominee, the first woman to lead a major party ticket in history and by far the most qualified, in–command nominee in this race to lead a messy, uncertain world.

Victory in diverse California hours later will cap off a winning primary campaign. As for Sanders, at 8 p.m. tomorrow the jig is up. If he needs to catch his breath, fine. If he needs a few days to retreat to Burlington, map out an exit and endorsement strategy and negotiate behind the scenes with Camp Hillary how he’s going to use his voice and deploy his army to take on Trump, fine. Take a few. But after tomorrow the attacks on Hillary Clinton stop. End of story. The primary is over.

While I can’t stand the methods he’s employed, I can only assume that the kitchen sink he’s throwing and the threats of contested conventions he’s making are tools to turn his supporters out one last time to try to close as strong as possible. That’s politics. I get it. But after tomorrow the primary will be over and there will be no further need to turn his supporters out in the current iteration—except to turn up the one time it matters: at the polls to support Hillary Clinton and defeat Donald Trump in November. The rhetoric had better match the reality. If it doesn’t, there’s a special place in American history for spoilers and traitors and it ain’t pretty. 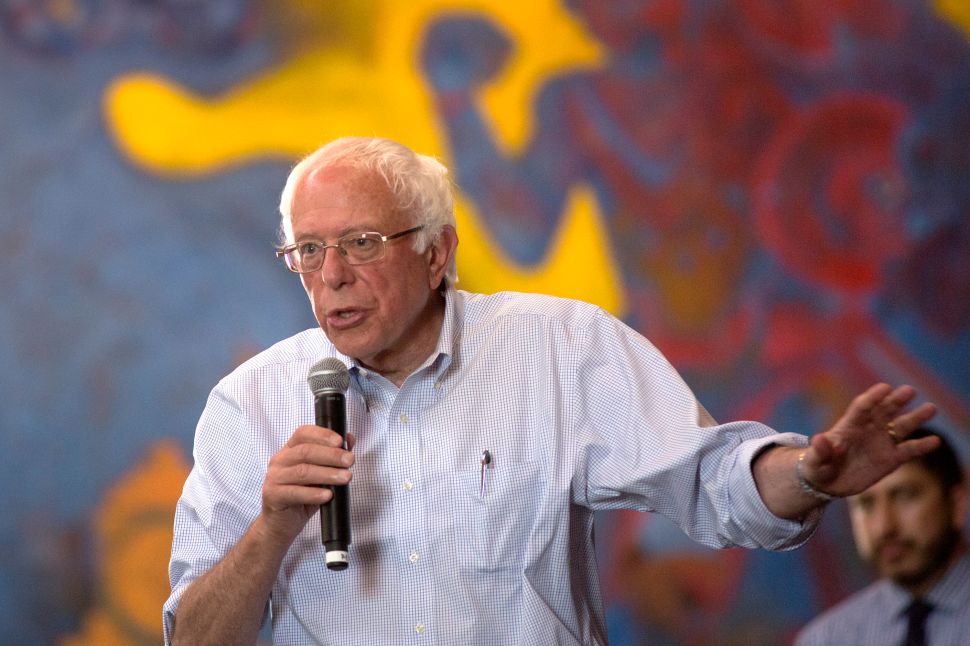