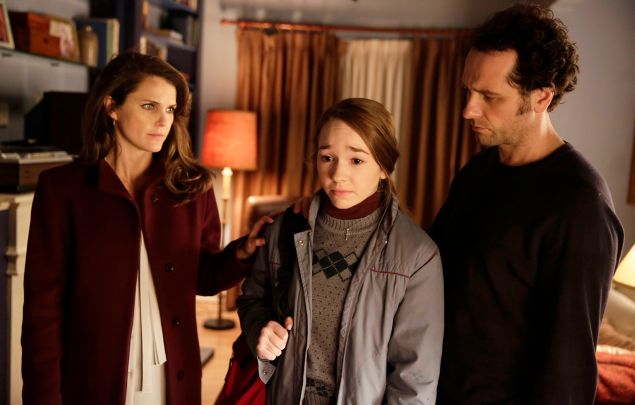 Paige Jennings may be broken, but she doesn’t break. After watching her mother Elizabeth stab an assailant to death and leave him for dead in a parking lot on last week’s episode of The Americans, the girl says she feels sick, but she doesn’t get sick. She asks her mother if she had to kill the man, and accepts that her answer is yes. Even when Elizabeth admits that she’s killed more people than she can remember — in self-defense, of course — her pacifist daughter simply asks if she was scared, not “how could you do that” or “how do you live with yourself.” Her primary concern appears to be that the dangerous nature of her parents’ work was kept from her, not that it’s dangerous, primarily to others, in the first place. The day after witnessing her first kill, she has her first kiss, barely breaking stride from the normal course of adolescent life; she keeps this a secret from her parents, but duly reports the latest batch of information gleaned from her new beau Matthew Beeman about the goings-on at the office of his FBI agent father Stan, and is taken aback when her folks discourage her from further fact-finding despite having pushed her in that direction with Pastor Tim and Alice. A lifetime of being lied to, and a year of being made complicit in the lie, has prepped Paige to contextualize her mother’s murder of a man not as a catastrophic breach of safety and morality, but a rung on a ladder leading her closer to the secret truth.

Holding out hope of access to a higher ideal is an excellent way to keep potentially recalcitrant operatives in line. This is the tactic deployed by Gabriel when William, viscerally horrified by the lethal potential of the Lassa-virus bioweapon he’s been ordered to steal, signals his unwillingness to follow orders. His description of the disease is memorable enough to warrant transcription: “Lassa fever’s a very undignified way to go. You basically dissolve inside, then squirt yourself out your anus in liquid form. First it’s whooosh, then it’s a trickle. The modified strain you want, the strain Level Four is hard at work perfecting? It’s even more lovely.” A brief pause, then as straightforwardly as possible, “I can’t do this one, Philip.” Unlike the last time he was presented with William’s crisis of conscience, Philip’s willing to go along this time, and says that as far as he’s concerned they can make up some story to tell Gabriel. It’s William who insists on telling their handler the truth — perhaps because, as was the case when he contacted Philip when he discovered the Lassa virus project in the first place, he wants to be talked into it. Sure enough, the old man pulls it off, with the dual-carrot approach of reminding the scientist of the country full of people he’s protecting, and offering to send him there to a hero’s retirement after this one last job. Country and family, or the potential for one, are a hell of a motivator for a man without either.

Yet it’s for precisely these reasons, it seems, that Oleg turns against his Soviet bosses. His girlfriend Tatiana has been promoted to Rezident of Nairobi, a transfer that will take her right through the glass ceiling and offer Oleg a chance to come with her. But a passing comment she makes about her dire professional prospects should she accidentally wipe out the Eastern seaboard in the coming week gives him pause. He’s thinking about a life with her, yes, but he’s also thinking about the limits of his own country, however well-intentioned. After a moving phonecall to his depressed and grieving mother, where they both laugh through tears at how Oleg’s brother, slain in Afghanistan, appears to be in both Moscow and Washington at once when they glimpse him from the corners of their eyes, he approaches Stan. His country has the brains, he tells the FBI agent, but not the money, and that’s where the problems arise. “If your people know that certain things are happening, that treaties are being broken, maybe they’ll stop if you bring this to the right people.” He tips Stan off to their man inside the outsourced bioweapons lab and walks away. He’s seen what the conflict between country and family can do to the latter.

What follows is more of one of my favorite elements of The Americans at this point: Beeman and Aderholt, crack investigators. After Aderholt cracked the case of the bugged mail robot earlier in the episode, leading the team to a woman who’s been paid by a man she believes to be a mobster whom she met in “A Roy Rogers in Franconia” (the episode’s title) to switch out the tape every few weeks for $500, he and his team reorient after receiving Stan’s big new information — they can’t capture the operative who receives the tape at a dead drop for fear of tipping the Rezidentura off that they’re on to them, thus causing them to scuttle or reshuffle the bioweapons plan. So they go about the tedious work of figuring out who’s the KGB’s inside man, a matter of digging through employee records and crossing off accountants and other people unlikely to have high-level security clearance. A cross-reference with records of the deceased later, and voila, William is uncovered as the mole. It’s deeply satisfying to watch these two guys, and even their dreaded new “munchkin” boss, who at this point seems more of a team player than they feared, use competence and cooperation to stop terrible things from happening. There’s far to much of the opposite. 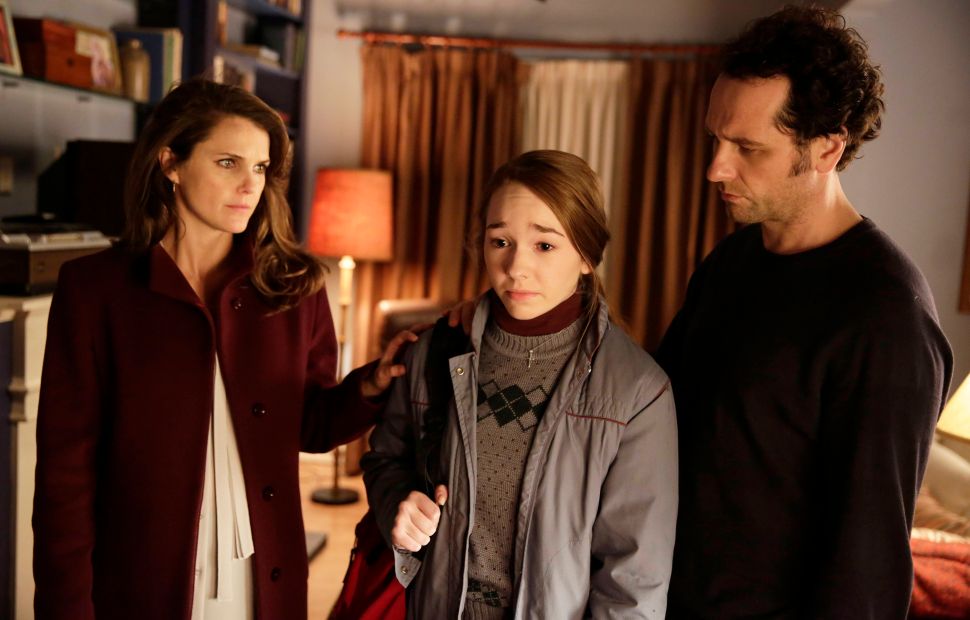