The first half of 2016 is barely behind us, so what to do? Soak in the summer sun, hit the beach, enjoy a tall, cold one…compile a best-of records list? Sure, why the hell not. We don’t know when, or how it became commonplace to celebrate the half-year mark with a big ol’ list of great albums released thus far but life is short; might as well rate it. An A-list batch of experimental records have already been unloaded this year (we will give props with a big-assed composite list of all those we’ve missed at year-end) but we’ve plucked out six standouts that have caught our ear so far in 2016.


The powers that be at Brooklyn powerhouse label Northern Spy Records have whipped up quite a stable of art-rock kingpins as P.C. Worship, Cloud Becomes Your Hand and Zs have helped steer the underground music mothership with forward-thinking abandon.

Interventions, the quartet’s third full-length and N-Spy debut, is a sonic orgasm of dizzying rhythmic patterns and bends galore where free jazz, prog and math-rock hop aboard and interlock on a motorik groove train that’s as whipsmart brainy as it’s ass-shaking danceable. Like its likeminded label-mates in Zs, the sax/guitar/bass/drums-electronics-wielding Horse Lords cement itself as gurus of entrancing repetition and razor-sharp mechanics as each of the nine songs that make up Interventions burst with elastic riffs of scientific yet euphorically hooky proportions.

75 Dollar Bill, WOOD / METAL / PLASTIC / PATTERN / RHYTHM / ROCK (Thin Wrist)
[soundcloud url=”https://api.soundcloud.com/tracks/266644645″ params=”auto_play=false&hide_related=false&show_comments=true&show_user=true&show_reposts=false&visual=true” width=”100%” height=”450″ iframe=”true” /]
For plywood crate-banging percussionist Rick Brown and econo guitarist Che Chen, the junkyard architects and core duo behind Klezmer music-meets-Velvet Underground heavy jammers 75 Dollar Bill, the DIY ethos flows through their veins and is their lifeblood. The staunchly independent twosome have been cobbling together their lo-fi trance-rock since 2012, self-releasing cassettes and bashing out a free-improv racket on sidewalks and under bridges with on-the-cheap gear and a stash of homemade horns and contraptions picked from the garbage pile.

After a one-album stint with Other Music Recording Co. (the record label arm of the soon-to-be-shuttered East Village record store), 75 Dollar Bill signed on with L.A. experimental label Thin Wrist and just served up WOOD/METAL/PLASTIC/PATTERN/RHYTHM/ROCK, a gloriously mind-frying, ritualistic splatter of Zen blues and Arabic and African music-influenced riff-rock repetition that shows Brown and Chen expanding their lineup with sax, violin, bass and second guitar. The sound may be bigger with a sweeter shine yet it remains unmistakably 75 Dollar Bill: epically shambolic, thrifty and jazzy guitarscapes dripping of ecstatic hypnotism.

Nick Millevoi, Desertion (Shhpuma/Clean Feed)
[bandcamp width=100% height=120 album=105504372 size=large bgcol=ffffff linkcol=0687f5 tracklist=false artwork=small]
Philadelphia six-stringer Nick Millevoi is a holier than thou shredder with cred to die for. As guitarist of math-jazz crew Many Arms, he unloaded mountains of notes that wowed downtown NYC overlord John Zorn enough to sign them to his Tzadik label, has joined forces with fellow Philly trombonist Dan Blacksberg in Hasidic doom metalists Deveykus and the experimental-leaning Archer Spade, does time in brainy tech-metal outfit Cleric and is a current member of Chris Forsyth & the Solar Motel Band.

Millevoi also has a slew of solo joints under his belt but this year he unleashed, arguably, his best record under his own name: the wasteoid desert-blues jam sprawl, Desertion. Along with Blacksberg, his Many Arms band-mate, bassist Johnny DeBlase, Hammond organ/pianist Jamie Saft and drummer Ches Smith in tow, Millevoi’s Desertion mishmashes the monumental influence of two Neil Young classics: the amps-to-10 guitar solo barnburners of Ragged Glory with the slow-burning stoner-rock atmospherics that made Jim Jarmusch’s Dead Man soundtrack such a tripping revelation. The six guitar-obsessed epics on Desertion are soundtrack ready for driving through a The Road-like apocalyptic wasteland.

Ask anyone in-the-Castle Face Records-know and the garage-rock crustiness that is its calling card—Thee Oh Sees, Ty Segall and Coachwhips, just to spew off a smattering—would be the first names dropped. But now with NYC-based psych-jazz and droning rockcentrics Sunwatchers in the Castle Face fold, Oh Sees main man John Dwyer’s label has branched out into “out” territory. On their first album proper, these free-improv born and bred noiseniks channel the freak-jazz of Sun Ra, the voodoo drum circle ritual pyschedelia of NYMPH and Funhouse-era Stooges icky blues skronk with the undying influence of avant-garde jazz icons like Sonny Sharrock and Albert Ayler.

Like Fight Against Babylon and Chaliwa, NZT’s third bass-heavy set titled Sunshine Seas get its dance groove on, jamming on the chillest of Dub and roots reggae vibes: think Zorn’s Masada on a Bob Marley stoner trip. Like Chaliwa, Saft again enlisted special guests like legendary Bad Brains vocalist H.R., and Brazilian percussionist and longtime cohort Cyro Baptista for all of Sunshine Seas’ sonic boom, with Baptista adding his signature percussive stylings and exotic speak-sing and chants to the Jamaican music-influenced propulsions. Saft’s wife Vanessa also cameos with a sweet-singing turn on the title track. Taking cues from heroes like Marley, Peter Tosh, Bunny Wailer and King Tubby, Saft has crafted his own Dub masterpiece.

Bitchin Bajas and Bonnie Prince Billy, Epic Jammers and Fortunate Little Ditties (Drag City)
[youtube https://www.youtube.com/watch?v=4VJYXHlcEq4&w=560&h=315]
In our book, Chicago-based ambient drone trio Bitchin Bajas own the bitchin’est band name in the underground rock music pantheon plus these super-chill avant-gardists have name-dropped Terry Riley and Alice Coltrane as influences, so dudes got taste. Their New Agey ecstatic din of droning organ, flutes, tape machine and loops fuckery both calm the spirit and wow minds and on supernatural sprawls like their self-titled record (via Drag City) and through collaborations with fellow Chicago improviser Joshua Abrams’ Natural Information Society, the Bajas have proven both vital sound craftsmen on their own and as perfect partners in venturing into the sonic unknown.

Automaginary, the Bajas’ pairing with Abrams’ Natural Information Society, crystallized a match made in drone heaven and that alliance has given way to another: the band’s partnership with the enigmatic folk nomad, Will Oldham, a.k.a. Bonnie “Prince” Billy.

A cooperative first birthed from a Record Store Day gig then ultimately followed by a jam sesh at Oldham’s house that was caught on tape, Epic Jammers and Fortunate Little Ditties is fitting of its excellent title: the quartet create purely improvisational vistas of otherworldly textures and patterns entwined with the wit and wisdom Oldman cracked open from fortune cookies. Yes, fortune cookies.

Only Oldham can pull off finger picking away on an acoustic while reciting from those kitschy crumpled pieces of paper lyrics like “May Life Throw You a Pleasant Curve” and “You Will Soon Discover How Truly Fortunate You Really Are” as the Bajas provide shimmering droned-out back-porch dreamscapes that resemble ritualistic chants that dance away with utopian vibes. 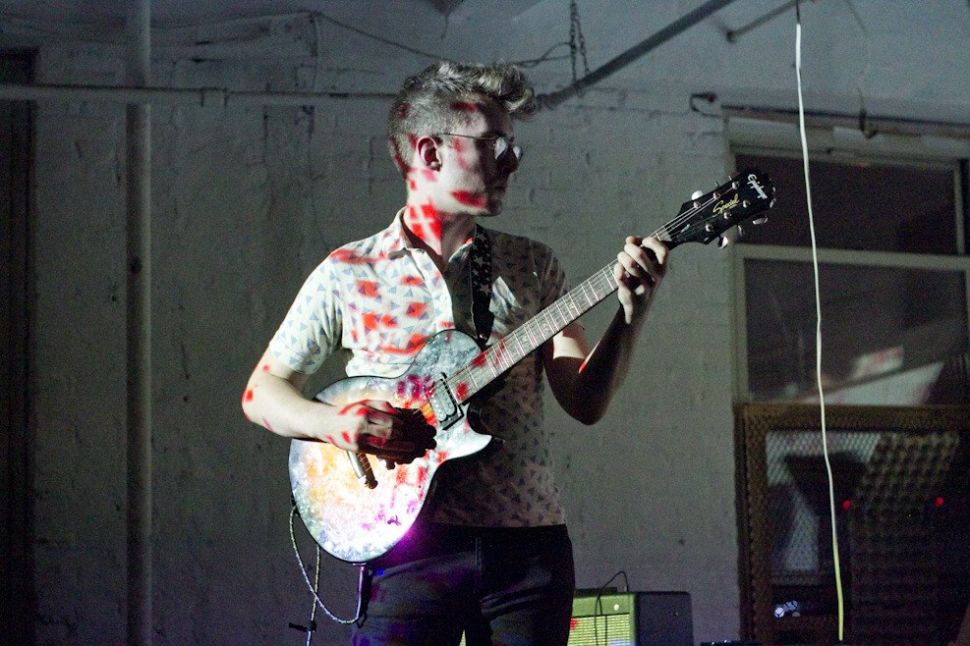