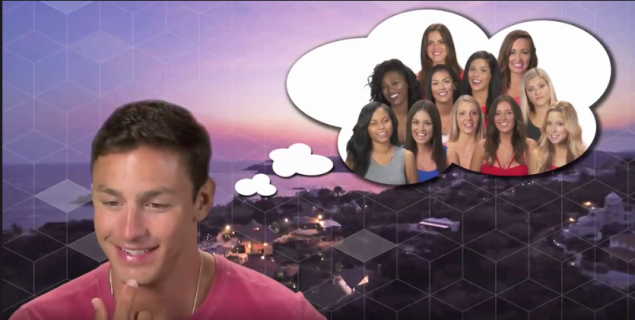 A thought-provoking title for this week’s episode of The Challenge because last week’s finale of The Real World: Go Big or Go Home basically had Jenna getting her face beat by Ceejai for calling her ratchet. Granted, there was an entire season of build-up and a few other real nasty insults there at the end, too but nonetheless this is some very interesting attempt at brand synergy or something.

Personally, I’m calling this week’s episode the Reset Button because it finally accomplished a few things that have either needed to happen for the last couple of weeks or have already happened in the last few weeks and are now happening again. For example, we were four episodes into the season and had only seen one elimination round. The amount of eliminations should not be even with the amount of torn buttholes. I had to actually look back into my notes from the season (yes I take notes, they will all be donated to the New York Public Library as part of my papers when I die) because I couldn’t remember what they are calling the eliminations. I thought it might’ve been The Piper’s Pit. Imagine TJ was like, sorry Nate and Christina, you’re going into The Piper’s Pit? It’s not, it’s the Jungle. But that’s how long it’s been since we saw one.

There’s only been one elimination all season. Teams got hurt. Teams quit. They’re running low on teams. Need more teams. What do they do? Bring back the only team that’s been eliminated the whole time. Devin and Cheyenne come back. Somebody is trying to make Are You the One? happen bad on The Challenge. The last replacement team was two Are You the One? players. Now, they’re bringing back ones that have been sent home. They need to change the name of the show to Are You the Seventy-Five? because that’s how many chances they’ve been given to try and make this work.

Johnny and Jess came in last again. That’s the third straight time. The elimination was canceled last week. If it wasn’t they’d have been long gone. But they’d have missed the house party and Jess never yelled at Tony and made him sleep outside. So it’s good they stayed but they also need to go. There’s only so many times I can watch Johnny Reilly put on his stink face and tell Jess how awful she is and how much he doesn’t like her. Their beef goes back to Real World Portland. You don’t get stronger beef than original roommate beef. And she’s not a good competitor but he was as fun to watch this season as a anthropomorphized lemon sucking on his own face. They should’ve been gone a while ago so this just righted that wrong.

Last week’s cliffhanger made it look like Camila got hurt in the . But Camila doesn’t get hurt. Camila is like the old Richard Pryor joke about how he lit himself on fire smoking crack but then fire tries to jump on Jim Brown and Jim Brown is like “hey” and the fire goes out. That’s Camila. The was hurt when Camila hit it. Of course, Camila and Tony are still not getting along. Tony hit her with the “my partner gets upset so I’m just gonna let you feel what you feel” and then Camila called him a coward. Later, Camila blew up Simone’s spot because Simone told Jamie with the good Boston accent not to trust Ashley after they hooked up. Simone thinks Jamie is a nice boy even though he’s kind of creepy and she doesn’t want Ashley to clown him on television, even if he is a correction’s officer and I didn’t come here to kiss a CO, that’s your man. Shout out Nicole, who got zero airtime this week (same for Jenna). Ashley and Simone exchanged some words like “weak ass” and “Wes is super ugly” with the whole house listening. It’s not a true argument in that house if Wes doesn’t get called ugly at some point. Ashley was just wearing a t-shirt and maybe underwear during this fight causing them to keep blurring out her backside which is the most intimidating way to fight. If I didn’t have pants on and someone started yelling at me, I would literally call time out both hands tapping my shoulders like the referees do it and then run and wrap a towel around my waist like the Saved By the Bell ep with the earthquake when Slater’s clothes get trapped in the locker after it falls over.

Cory and Ashley won the challenge so they get to pick who goes in to face Johnny Reilly and Jess and after this fight Ashley is dying to throw Simone in but she can’t because Simone’s partner is Thomas, Cory’s best friend. They’re already throwing in Nelson and Amanda who came in late as replacements and also Amanda has gotten into a fight with almost everyone in the house including the pool for being “so damn ratchet wet” so that’s an easy one. They were going to go Nate and Christina, which was prob def the only way Reilly and Jess survive this week. But then Cory pulls a shocker and says Thomas and Simone’s name. Mostly because Ashley said she was going to make his life a living hell and this is a person who will say the reason your butthole tore is because you have a weak ass while they’re not wearing any pants themselves so you need to just give her what she wants. Simone attributes it to Ashley having the “vajayjay to sway sway” which would most certainly be true if I had any idea what it meant. When it comes time to pick which of the vote teams voted in, Simone stares down Ashley like Bull Hurley about to eat Stallone’s arm off at the end of Over the Top. All that was missing was little Mike Hawk screaming “dad, don’t let him psych you.” Simone, still staring, reaches in and without looking pulls the white skeleton out of the bag, meaning they are safe for the week. Simone is out for revenge for sure.

The best moment of the show is after Jess is eliminated, they interview Tony who may or may not have been hooking up with / having sex with / shitting his pants in bed with Jess. Tony’s like “Jess is gone now so who is next on my hit list?” And then they thought balloon the entire cast of women over his head and Tony is befuddled because even Tony doesn’t know the answer and he just looks at the camera and earnestly says “these girls are all so attractive.” Reset Button is hit for Tony for sure. 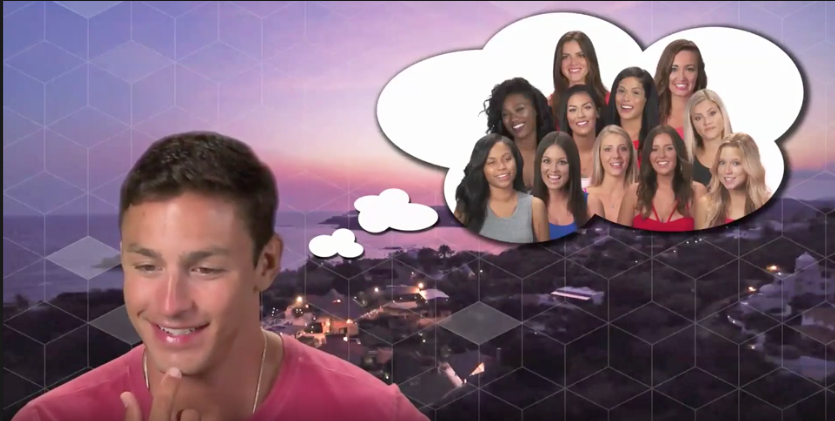