Look up at the top of this internet page. Right above the picture. In the headline. There is a title. It is the title of the show and then also the title of the episode. You probably already knew the name of the show because you made the choice to come here on your own. You have nobody to blame but yourself. Yes, it says “The Challenge Rivals III.” Makes sense so far. There were two other seasons of The Challenge Rivals so this being the third one is very logical. Then it says “episode 7.” Also makes perfect sense. Six episodes came before this newest one. Still with me? Good. Because now we fall off a cliff. The name of this particular seventh episode in the third series of The Challenge Rivals is alluding to the fourth movie in the Terminator franchise.

It was the summer of 2009. The Black Eyed Peas were tearing up the charts with I Gotta Feeling. And unbeknownst to an upstart young actor named Sam Worthington, he was a couple months away from transitioning from “that guy from that Terminator movie” to “that guy from Avatar who has sex with his tail.” Terminator: Salvation is many things. It is the movie Christian Bale got recorded screaming at a production assistant on-set during filming. It is the movie Arnold couldn’t appear in because he was still Governor so they CGI’d his old bodybuilder self into the movie. And now it is the movie that seven years later inspired the title of a Challenge Rivals III episode.

Bravo, whoever gets to choose these names! This is a job that I want to have. Although I prob def would not be good at it because all my ep titles would sound like the Rambo movies, which make the least sense out of anything ever titled. Case in point: Rambo: First Blood Part II.

This week on The Seventh Episode of the Third Season of The Challenge Part I, the Camilanator was released back into the wild. Except, not really. It was a pretty calm showing for her. No chairs got thrown, no potted plants overturned, no death on all her enemies sworn. Unfortunately, Camila’s grandmother passed away while the show was filming. And she wasn’t able to get to the funeral in time, so she decided to stay and compete. On top of that, Camila and Tony are having a hard time getting along. Tony feels like Camila doesn’t respect him, which is pretty on-point because Camila doesn’t respect him. All Tony wants is a little “attaboy” from his partner. Camila and Tony are perfect rival partners because they both can completely lose their cool at any moment. Tony punched a carton of eggs because he didn’t feel like Camila was being real with him. And not just a standard dozen carton. This was a full twenty-four carton. That’s like six omelets Tony! Think of the protein! Luckily, as Tony puts it when they compete “off days we hate each other, game day dis my girl!” But they didn’t win the comp. So apparently the salvation that the Camilanator got this ep, is that her and Tony didn’t come in last. Seriously, someone named this ep off a seven year old box office flop for the slightest of reasons. I love this show.

Devin got super twisted up in the club and aside from screaming “never give up on love” randomly, he also started to threaten all the Real World teams that he was going to throw them in when he got the chance. He’s probably not going to get the chance because you have to win a comp to do that. But he got Cory amped up because Devin’s partner is Cheyenne and Cory and Cheyenne like each other, maybe even like like each other. Then Jamie with the good accent got involved and told Devin that Devin thinks he’s tough because he’s from Massachusetts but that in fact he is not tough. And then Devin says “I will tap that ass out” which clearly does not mean what he thinks it does. Unless it does, and then that’s a whole other kind of threat. It’s an interesting strategy, if a guy is like “I will beat you up” and then you’re like “I will have such hard sex with you” and then maybe you just actually do it and don’t fight anymore and get a farm somewhere and raise ducklings. Sounds ideal. But they don’t do that and Cory comes in and mushes Devin a little bit because now you’re allowed to fight and push and hit as long as nobody bleeds profusely. Cheyenne tells Devin to chill out because he’s antagonizing people and he’s like “how am I antagonizing people!?!?” and she’s like “by doing what you’re doing” and he’s like “yes, because that’s what I do! I antagonize people” which is the most antagonizing way to admit to being antagonizing. “What, me, doing this thing you are saying I am doing? How am I doing that? Yes, yes I am doing it but still…”

The challenge this week was a riding a bike over a cliff and having to grab flags on the way down. There wasn’t much skill to it which is how Nate and Christina somehow won. But it was good they did because they completely blew up the Are You the One? alliance by throwing in Nelson and Amanda and Devin and Cheyenne. They should have thrown in Tony and Camila because of the “stolen token” incident from last week which Camila still hadn’t apologized for. By realistically, how could Christina throw in Tony after she was the one with Tony in the bathroom during the “pants unzipping sound” incident. You can never betray the person you experienced your first televised “pants unzipping sound.”

Amanda managed to pull the black skull on the first try so somehow Devin and Cheyenne are safe again, after already being eliminated and brought back. Nany says they must have “lucky sticks shoved up their asses” and now all I really want is for Nany to have her own show where she teaches us all of her expressions. The Jungle had a bathtub full of ice that you had to sit in while you were doing a puzzle. Jamie peed in the ice and Kellyanne was totally fine with it. Then Jamie screamed “my weiner hurts” and Devin was like “did you just call it a weiner?” and Jamie was like “yeah it hurts” and that was the best dialogue on this season or any season of television ever. I can’t wait to go to the Museum of Moving Image for the induction ceremony of the “My Weiner Hurts Did You Call it a Weiner” exhibit. Despite having a hurting weiner, Jamie and KellyAnne win and the Are You the One? squad is reduced yet again. Farewell Amanda, may you continue to call many things around you ratchet at 3 AM. 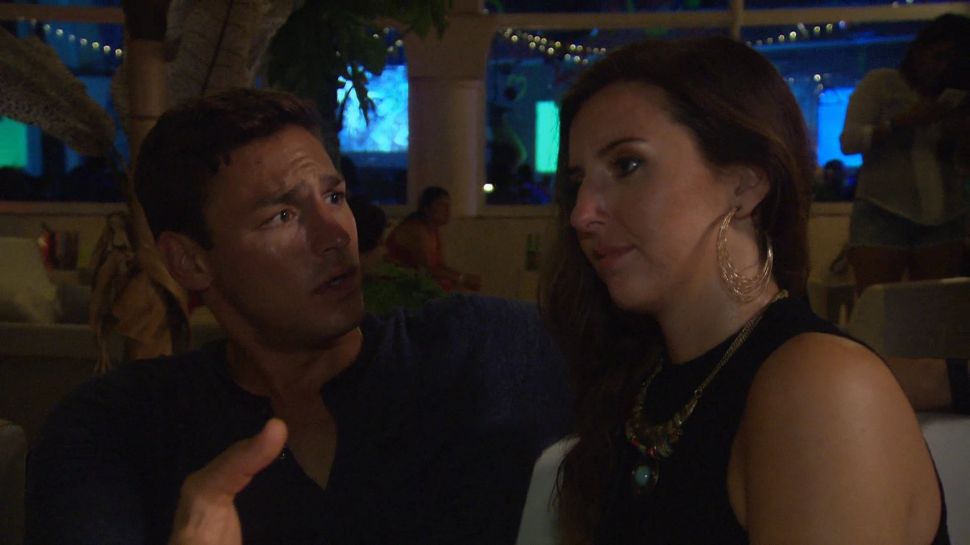