There’s been some amazing and heroic acts of episode titling so far this season on The Challenge. For example, making reference to a seven-year old Terminator movie featuring a half-CGI, half-lizard, sitting governor Arnold Schwarzenegger looking more like a Ninja Turtles villain than a man, android, or legislator. But how do you not use the “let sleeping dogs lie” pun on last week’s EP when Tony and Camila got into a drunk fight and ended up being kicked off the show? Tony was asleep. And he’s attracted to anyone who is attracted to him making him what the kids would call “a dog.” Remember the rules, no matter what you do you never wake up Drunk Tony. You don’t tug on Superman’s cape. You don’t spit into the wind. You don’t pull the mask off Jim Carrey in The Mask. And you don’t mess around with Drunk Tony. Also, calling last week’s episode “Let Sleeping Dogs LIE” would work on like forty-five different levels because Tony claims not to remember any part of his fight but also Tony uses words like the hackers in the movie Hackers when they’re hacking the Gibson and just throw every virus they have at it to overwhelm the whole system into submission. Tony’s words are a string of computer virus’s that you have to type “COOKIE” to shut down. But this week’s episode was sort of a continuation of last week’s ep so maybe they felt like it was all of a piece and not a huge missed opportunity, shrug emoji.

After staying up all night in the previous ep standing on a box, which was actually a little bit of TV magic because Sarah Rice disappeared in one of the camera angles and she told me on Twitter that it was for a potty break (so lies lies lies my whole life is a lie how are there bathroom breaks in an endurance competition???),  this week picks up right as the Rivals had to complete a puzzle using the events from the night before. The questions had to do with the order of how things happened and details from each vignette. But mind you, nobody was on any sleep, unless they were giving nap breaks along with those bathroom breaks, so I don’t know what is real anymore. Doing anything on no sleep is hard, I got nine hours of sleep last night and I still can’t remember the difference between Michael Madsen and Tom Sizemore (it’s six inches, the funniest joke in Pauly Shore is Dead).

Of course John Bananas and Sarah win. Not only do they win, they do to the competition what Gwenyth did to the census bureau in Contagion. Look, from the start I have been a Bananas and Sarah truther. I do not believe that their beef was or is real. I do not believe that Bananas could hate someone so much for pulling his exact patented move. I’m sure it stung. And I’m positive he used those feelings of betrayal in a grand performance the likes of which would make Lee Strasburg proud. But this was an act. It was an act to get teamed up for Rivals and it was an act for the viewers at home. Bananas has done about forty of these seasons, if anyone knows how to give the people what they want, it is him. If anyone knows how to get what they want, it’s him. He’s the perfect villain. I’ll never root for a Bananas team. I’ll never root for a Bananas win. I hate the way he talks and treats the women on the show. But is he an essential part of any season? The guy it’s most fun to root against? For sure. And yo, if I got a chance to be on these shows, I’d be beefing with John B at every opportunity just on the chance they’d pair us together at some point. Getting on Bananas team is a 401K plan. So there’s no way I believe that three weeks ago Bananas and Sarah couldn’t have a dinner together without security being there and now this week they’re delivering the Johnny Castle to Baby, “I’m scared I’m going to leave here and never feel about competing again the way I do when I’m competing with you” speech while Sarah rocks her NERDY BY NATURE shirt. And I see you Nany, giving the “I hate Bananas” speech in the interview room. I believe Nany dislikes him, he’s done her dirty more than anyone. But Rivals 4 coming, and who wouldn’t want to be teamed up with the all-time winner?

Wes and Nany come in last place which means they have to go straight into The Jungle. But even worse than that, they get taunted by TJ who is like “Want a clue? Too bad, hurry up and get it done.” TJ is everyone’s daddy because he’ll hit you with the “you guys probably could use some bofa” and then the second you ask what bofa is, he’s telling you while he’s doing a 360 flip-whip over your head and you have to quit the show which makes TJ hate you even more because TJ hates quitters like The Blues Brothers hate Illinois Nazis.

Wes tries to rally up the house because he knows that the way things are going, Bananas and Sarah are going to walk away with this money. He knows this because he’s seen it happy infinity times. Everything on this show is cyclical. Johnny Bananas is like Matthew McConaughey in Dazed and Confused. He keeps getting older but all the new kids stay the same age. He’s pulled this trick off so many times and nobody learns until its too late. Yes, as the newbies get some seasons under their belt, they learn they have to come in gunning for JB from the jump. The next season John does, will probably see him out earlyish. It happens. But for now, he has everything on lockdown. He’s purposely brought Cory and Ashley into an alliance just to backstab them for what they did last season. And that’s why I don’t believe Banana’s and Sarah’s beef. Because Bananas doesn’t get mad, he sets up scenarios to suit himself. His “fight” with Sarah got him one of the most competitive partners there is. The second he found out he was teamed with her, he knew he was getting that money. He’s not mad about that. But he’s going to give the audience a show.

Johnny and Sarah nominate KellyAnne & Jamie and Cheyenne & Devin. Somehow, Devin has mind control over the skulls and has never picked a black one. Devin tells the skulls to shut up and they be quiet, but when he leaves, the skulls be talking again. So even though Jamie won last season and has the good Boston accent, he’s going in. The competition was blindfolded soccer. If you know anything about Wes, it’s that he’s not going to list off a bunch of his accolades but he’s above average in soccer. Nany beats KellyAnne and then Jamie looks like The Mountain ripping off the heads of the Faith Militant bodying Wes to an easy win. The final round, Wes manages to be slippery enough to score and not be eliminated. Wes is back in the house and he’s scheming with Devin about making Johnny go against Vince in The Jungle. You gotta win first though, boys. You gotta get that win. Don’t let those sleeping dogs lie or wake. 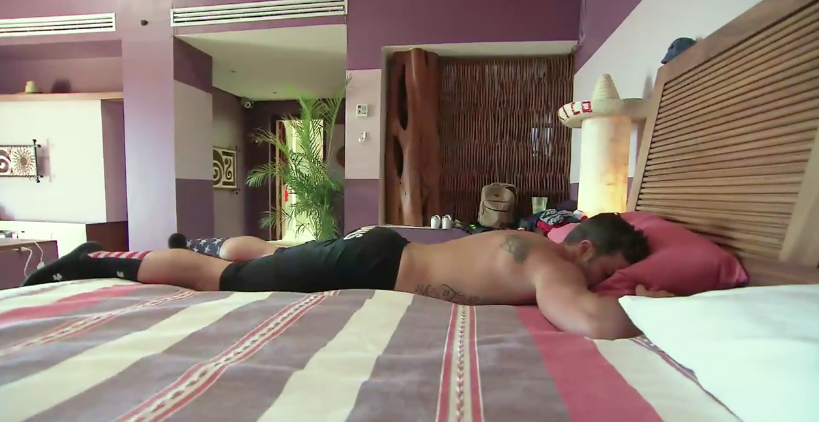