About two years ago, Yi Huang set out to look for an apartment. Her priorities: a decent amount of space, with a private outdoor area larger than a balcony, in a neighborhood like the East Village, Boerum Hill or Fort Greene. Her budget: around half-a-million dollars. 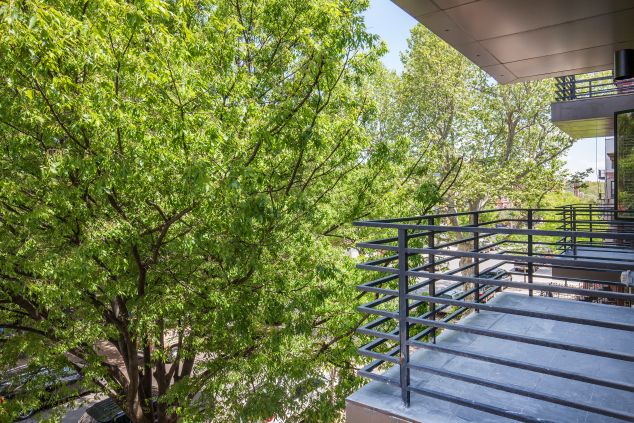 The “million-dollar” (almost) views at 138 Quincy Street in Bed-Stuy, where buyers paid $1,100 per square foot for the smaller units. Courtesy Douglas Elliman

“$1 million seemed out of the question back then,” she said. “But for half a million, I was finding nothing. And my budget started inching up.” Pretty soon, she said, “$1 million became the absolute upper end of what I could do. But even at $1 million, you have to sacrifice so much if you want to buy in a nice part of Brooklyn or the East Village.”

For all the listings priced just under $1 million, Huang found a frenzy of bidding wars, all-cash offers, and a bunch of New Yorkers with budgets just like herself. She eventually signed a contract after a bidding war for a co-op apartment in Boerum Hill, triumphing over another interested buyer after offering to pay $2,000 more at the final hour. She ended the ordeal with a harrowing reflection about today’s market: “When I started, I thought that if you paid $1 million you were getting a lot of perks. Now I know that $1 million is almost nothing in this crazy market.”

Welcome to New York, where buyers hardly flinch at a $1 million price tag because there are just so many of them. According to Streeteasy, more than 5,000 condos, co-ops and homes are now on the market for $1 million and above. The neighborhoods with the most $1 million or more listings? In 2013, $1 million-and-higher listings accounted for 48 percent of the inventory in Manhattan; they now account for 64.3 percent. The neighborhoods with the most such listings this year? TriBeCa, with 568 of 571 total listings priced over $1million; Nolita, 41 of 42; and Flatiron, 407 of 457. 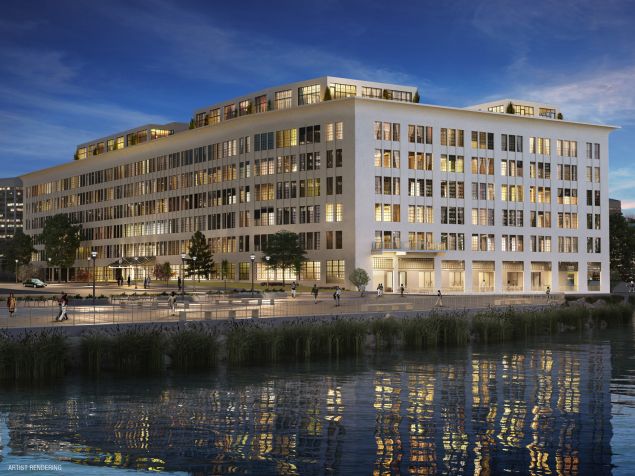 The Austin Nichols House, a 338-unit building in Williamsburg, is banking on the “$1 million value proposition” along the waterfront: Only its one-bedrooms are priced in that range. dddd

So what does a million-dollar listing mean? It can get you an unimpressive vinyl-sided home in Greenwood, Brooklyn. Or a two-bedroom, two-bathroom condo in East Williamsburg. Or a glassy 700-square-foot one bedroom in Midtown West. The price also stands as dividing line between what most New Yorkers feel like they can afford, and what they can’t, creating a skewed vision of what’s “affordable” in the market.

“If a listing is priced at $999K, I’ve got people crying and begging me to see it,” said Morgan Munsey, a broker who sells with Halstead in Bedford-Stuyvesant. Bed-Stuy is a Brooklyn neighborhood that’s seen a radical increase in listings priced above $1 million, given the neighborhood’s impressive stock of townhouses still priced lower than those in Park Slope. Munsey recalled pricing a townhouse at $935K in 2013 to reactions that the price was too high. Doubters were proved wrong: “It was the last sale under $1 million in [that area of the neighborhood],” Munsey said.

Townhouse prices hovered around $1 million for the next year or so, now they surpass $2 million. “I thought we’d see these numbers in 10 years, but it happened twice as fast,” Munsey said. Today in Bed Stuy, any townhouse that hits the market for $1.6 million is typically in contract within a few weeks; brokers have taken to calling it the “$1.6 million special.”

The condo market isn’t much more promising. “For condos, the $1 million price point is applicable to Brooklyn neighborhoods on the border of very established [ones],” said Jessica Peters, a broker with Douglas Elliman. With condos, a buyer’s major concern is an extra mansion tax, which kicks in when the price surpasses $1 million. “Many buyers don’t want to go beyond $980K on a bid… that $10,000 mansion tax is something many buyers have a hard time stomaching, especially in Brooklyn.”

“For condos, the $1 million price point is applicable to Brooklyn neighborhoods on the border of very established [ones],” said Jessica Peters, a broker with Douglas Elliman.

The same goes in Long Island City, where the median price is “just a hair below $1.1 million,” said Rick Rosa, a Douglas Elliman broker who has worked in the neighborhood since 2002. At new developments he is representing—the Factory House, a 37-unit condo at 42-60 Crescent Street, and the Dutch, an 86-unit condo still under construction at 25-19 43rd Avenue—people are paying up to $1,200 per square foot, with particular demand for two bedrooms under $1 million. (At the Dutch, the lowest-priced two bedroom, priced at $965K, is already in contract.) “I never imaged hitting that number in LIC,” Rosa said. He still feels that LIC is a deal, given the higher prices at waterfront developments in Manhattan and Brooklyn. 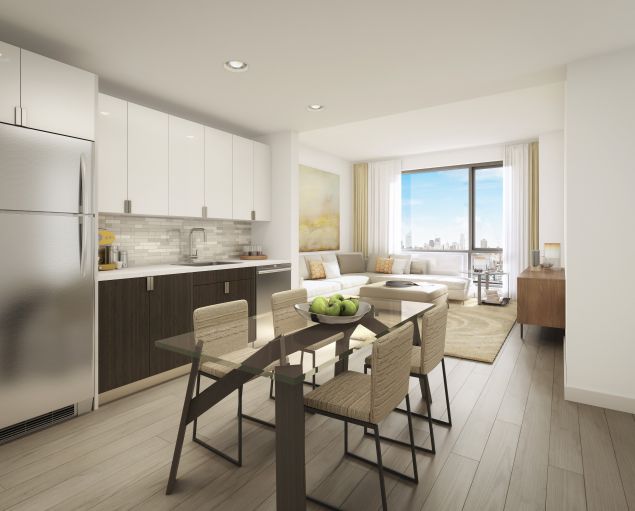 The Dutch, in Long Island City, where the lowest-priced two-bedroom (965K) is already in contract. Courtesy Douglas Elliman Real Estate

A deal, however, is all relative in this market. Asher Abehsera, the CEO of LIVWRK, one of the developers (along with Kushner Companies) behind the new 338-unit condo Austin Nichols House, in Williamsburg, spoke to the ‘$1 million value proposition.” Along the Brooklyn waterfront, he said, people will readily pay $1 million, and will be clamoring for anything under that price point, as long as other neighborhoods are priced higher. At Austin Nichols House, only one-bedroom units are priced around the $1 million range, between $834K and $1.018 million; two-bedrooms start at $1.3 million.

The rental-to-condo conversion 389 East 89th Street is also banking on its “affordable luxury units,” with 27 of the 156 units to be priced under $1 million. “The apartments just plus or minus $1 million have sold the fastest,” said James Lansill, who is handling sales through Corcoran Sunshine Marketing Group. “The majority of residence are actually priced better than much of the new Brooklyn product.” There’s lots of interest from developers to sell new development apartments at price points closer, and just below, $1 million, he said. But high land and construction costs “create a formula that push prices quite high.”
So while the ultra luxury market is going through a well-publicized slowdown, the $1 million price point is doing as well as it ever has in New York. Not that you should forget how much money that actually is. “$1 million is $1 million. It’s a lot of money and you can’t distance that,” said Rick Rosa, the LIC broker with Douglas Elliman. “We’re more jaded because we used to it, but it doesn’t make it cheap.”

*Jared Kushner, CEO of Kushner Companies, is the publisher of the Observer. 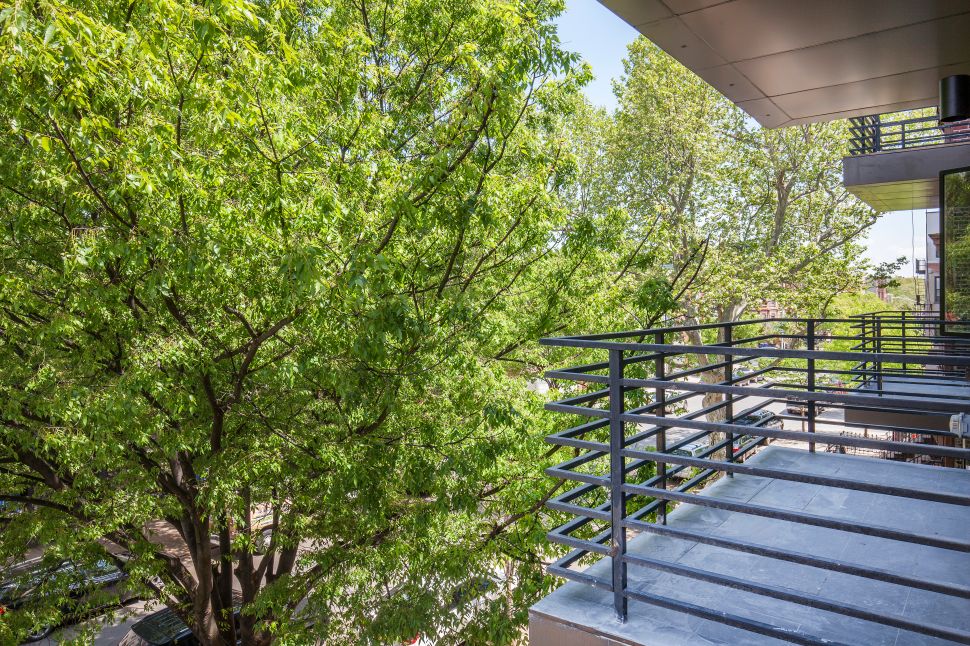