It’s a helluva daunting task to keep up with all the concert happenings in this town but for this month’s best avant-garde gigs, we go festival nuts. From Vision Fest, Ende Tymes, Red Hook Jazz Festival, the International Anthem and Infrequent Seams label showcases to Northside, there’s forward-thinking sounds for all ears. But fest haters, don’t fret: we’ve got you covered, too. So head out into the hot-ass summer sun or stuffy sweatbox venues and get your weird on.

Conceived from the freethinking, warped mind of composer Bob Bellerue, Ende Tymes—the reigning bacchanal of noise, experimental music and sound and visual art—returns for its sixth cataclysmic installment. Never one to disappoint, Bellerue has amassed an army of 40-plus holy noise rollers who will descend from the depths of the experimental underground to embark on sound-deconstructing missions over what promises to be four sonically epic days.

For the last half-decade, staunchly DIY duo 75 Dollar Bill has sworn to jamming econo, cranking out their junk-fi-grade trance-rock with an instrument stash ostensibly plucked from the trash heap. Percussionist and downtown art-punk vet Rick Brown (of Fish & Roses and Run On) first crossed paths with guitarist Che Chen on MySpace during the mid-2000s before their alliance crystallized with a pair of self-released cassettes. Cassette and Olives in the Ears gushed with mind-frying blues, Arabic and African music-influenced repetition that employed nothing more than Brown perched on and banging beats on a plywood crate, an on-the-cheap Japanese six-string and amp to match, a hodgepodge of contraptions and a rotating cast of sit-in players.

True to their DIY mantra, the nomadic 75 Dollar Bill have been found jamming out their ramshackle guitarscapes on the sidewalks of Chinatown, under the Manhattan Bridge or at their Greenpoint stomping grounds Troost. June 4, Brown and Che follow up 2015’s excellently thrifty Wooden Bag with their debut for the L.A-based experimental label Thin Wrist label they call WOOD/METAL/PLASTIC/PATTERN/RHYTHM/ROCK, a descriptor perfectly fitting of their singular vision and another addicting dose of their ecstatic riff-rock hypnotism. Little Black Egg (starring Georgia Hubley of Yo La Tengo fame) opens.

Vision Festival—the annual avant-garde jazz summit that pays tribute to and showcases both free jazz godheads and forward-thinking upstarts—celebrates its 21st year as the bastion of creativity that is New York City is rolled out over a seven-day-long stretch of righteous sounds, words, dance, poetry and film. But for downtown legends and festival founders William and Patricia Parker, this year’s edition hit a snag.

The Parkers’ nonprofit and festival organizer Arts for Art has found itself in a precarious position as they’ve lost support from essential outlets, particularly New York’s Department of Cultural Affairs. That loss of key funds has spearheaded an online campaign to which musicians and fans have responded to in a big way. As of this posting, nearly $42,000 has been raised toward the $50,000 goal and the Parkers are determined to soldier on with a program of iconic proportions.

CP Unit at Muchmore’s on Tuesday, June 7 at 9 p.m. with Jooklo Duo and Samara Lubelski

Only in his mid-20s but wise beyond his years, shaggy-haired toothpick Chris Pitsiokos has been blowing punk-jazz guts and gore inside Brooklyn’s DIY hubs with his no wave-inspired fire music backed by a variety of his merry band of outsider misfits since 2012.

Pitsiokos first burst onto the scene alongside drummer Weasel Walter (of Lydia Lunch Retrovirus) on 12’s Unplanned Obsolescence and dude’s been a workhorse ever since. An alto saxophonist who wears the influence of John Zorn, Ornette Coleman and Peter Brötzmann on his sleeve, Pitsiokos bleeds balls-to-the-wall skronk, bebop sweat and swing and Flying Luttenbachers-esque “brutal-prog” on releases such as his 2015 leader debut Gordian Twine, Drawn & Quartered (another duo effort with Walter), solo sax effort Oblivion/Ecstasy and in Protean Reality, a trio he shares with bassist Noah Punkt and drummer Philipp Scholz.

Tonight, Pitsiokos will be blowing chunks of holy hell under his C.P. Unit iteration as he joins forces with a crew of his fellow bruising provocateurs: Walter, guitarist Brandon Seabrook and Child Abuse bassist Tim Dahl.

As a local staple rooted in New York’s experimental community for the last decade and change, bassist/composer James Ilgenfritz owns serious cred. Just last year, Ilgenfritz hooked up with guitarist Eyal Maoz and drummer Lukas Ligeti to form Hypercolor, a Sonny Sharrock-inspired jazz/rock shred unit whose self-titled effort released by John Zorn’s Tzadik label was a 2015 standout. Then there was Hypercolor’s polar opposite: the colossal undertaking in the form of the “multimedia opera” The Ticket That Exploded—an homage of sorts to the radical Beat generation writer William Burroughs performed by Ilgenfritz’s 20-piece Anagram Ensemble.

Now, Ilgenfritz has turned his attention toward his nascent record label, Infrequent Seams. For three nights, he’ll be presenting a tasty feast of experimentalism performed by intrepid noiseniks from the realms of noise, electronics and free-improv. Set to perform as part of Infrequent Seams Spring Festival is Philip White (who’s also a member of the awesomely-named Colonic Youth with Ilgenfritz), Anagram Ensemble, Hate Speech (featuring Jeremiah Cymerman and Charlie Looker of Psalm Zero) and Devin Maxwell, who is celebrating the release of Works 2011-14. Click here for the full schedule of events.

The bustling festival season continues to astound with yet another keeper as the Red Hook Jazz Festival—going strong in its ninth year—presents a lineup teeming with avant-jazz royalty of the highest order to grace its sunbaked outdoor stage in the community garden and ecological center that is the Urban Meadow, a formerly abandoned lot.

A parade of local heavyweights led by Tomas Fujiwara & The Hook Up, Bobby Previte & the Visitors, and Jeff Davis Authorities Trio + 1 will take over the delightful Urban Meadow environs for consecutive Sundays to lend their jazz gospel to the relaxed, familial vibes. The sexy strut of trumpeter Steven Bernstein’s Sexmob and the jazz/rock pulsations of Rez Abbasi’s Junction may even prod the jazz-seeking throngs out of their lounge chairs and off their picnic sheets to stir up some sweaty movin’ and shakin’ in the summer sun. Here’s hoping the rain stays away.

Like its Chicago record labels-in-arms Delmark, Thrill Jockey, Atavistic and Touch & Go, the rising International Anthem imprint joins an independently-minded, genre-defying host of imprints putting out on the fringe music by outliers from across its hometown landscape and beyond.

Just recently, International Anthem dropped Alien Flower Sutra, an alien sound-world sublimely constructed by local heroes Rob Mazurek and Emmett Kelly (of The Cairo Gang) and later this month guitarist Jeff Parker returns with The New Breed, a beats and groove-intensive beast of a record that shows the longtime Tortoise member paring down the jazz licks and experimenting with R&B and electronics.

Now, the Chicago label is picking up and moving East, at least for one night, with a Summer Showcase packed with grizzled pros and fresh innovative blood. Repping the veterans are Mazurek and drummer Chad Taylor, two titans at the helm of the long-running Chicago Underground Duo, whose output for the Brooklyn-based Northern Spy Records—2014’s Locus and 12’s Age of Energy—is cosmic post-jazz at its finest.

Then there’s the self-anointed “beat scientist” Makaya McCraven. A brain-bending mixmaster/drummer wizard whose hip-hop, funk and free improv shapeshifting jams heard on epic groove fest In The Moment—a monumental project gleaned from 48 hours of live recordings during a residency at Chicago’s The Bedford—proves he is, indeed, a slicing and dicing scientist of sounds.

Rounding out the bill is improvising trumpeter-about-town Jaimie Branch, an outsider from the punk-jazz school in the vein of Chris Pitsiokos and Weasel Walter and one who has quickly staked her claim in Brooklyn’s avant scene. The all-star quartet Branch has convened for tonight’s performance—Tomeka Reid, Jason Ajemian, Chad Taylor—should incite deep fire-breathing.

With the dreaded announcement of East Village institution Other Music imminently closing later this month, Chinatown’s Downtown Music Gallery is one of NYC’s last record stores standing and lower Manhattan survivor in the face of rising rents, highbrow boutique takeover and luxury condo high rise-lined streets. Sure, the store was forced from its prime Bowery space to a Chinatown basement several years ago but DMG has persevered, remaining the choice destination for the avant-garde jazz, contemporary classical and progressive rock CD and vinyl shopper.

The solid year continues for de Leon as he’s resurrected his avant-metal alias, Oneirogen, unloading the extreme, yet majestic sonic dystopia of Convivium, a terroristic slab comprised of seven synthesizer-driven darting and stabbing pieces cut from the noise/metal cloth. For this stellar gig, not only will de Leon will be pulling double-duty (he’s frontman for death metal outfit Luminous Vault) but black metal rabble-rouser Hunter Hunt-Hendrix will slip into his solo electronics guise, Kel Valhaal, to preview tracks from the forthcoming New Introductory Lectures On The System Of Transcendental Qabala, due in July.

Scroll Downers with Custodians and Ornament at Trans Pecos on Thursday, June 2

The Out Louds at Cornelia Street Café on Tuesday, June 14

Drummer Rainey and saxophonist Laubrock ring in the duo release of Buoyancy with this gig at the Park Slope bar/performance space.

Cloud Becomes Your Hand at Secret Project Robot on June 18 at 8 p.m.

Brooklyn art-popheads Cloud Becomes Your Hand welcome in the release of Rest in Fleas, its second set of schizoid psych earworms for Northern Spy Records.

Bonnie “Prince” Billy + Bitchin’ Bajas (together AND apart) + Highlife on June 21 at 8 p.m 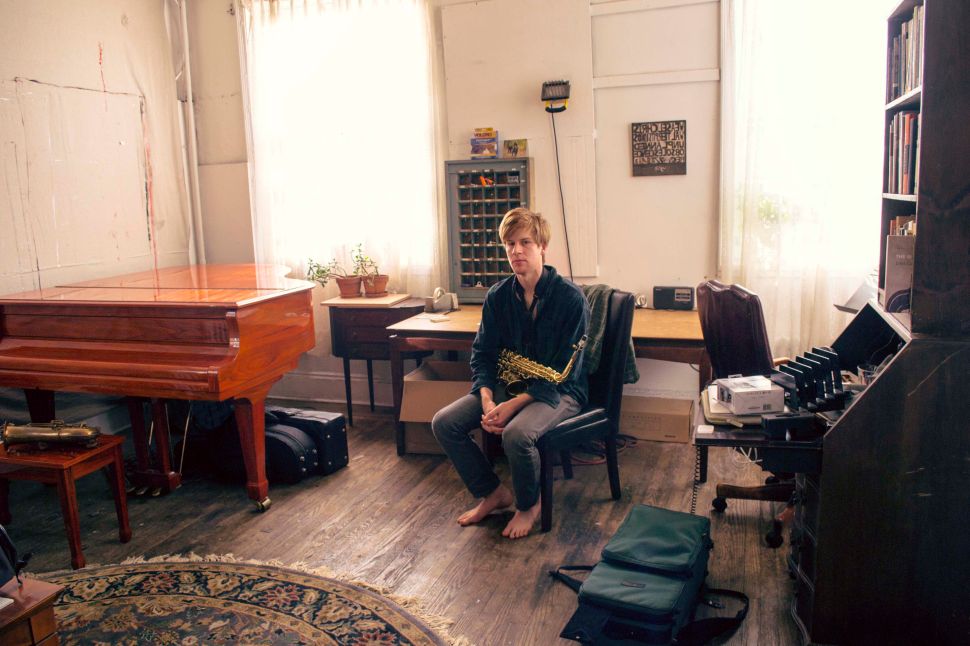