The Senate paid tribute this afternoon to the late Senator Ray Bateman of Somerset County, the Republican lawmaker who died over the weekend at age 88.

“One of his greatest achievements is you,” Senate Majority Leader Loretta Weinberg (D-37) told state Senator Kip Bateman (R-16), the late senator’s son. “Serving with you is a tribute to him and an honor for us.”

“Ray was a principled person,” said Senator Gerald Cardinale (R-39). “He was a prince of a person.”

Former TV personality Senator Diane Allen (R-7) recalls covering the late Senator Bateman in the Statehouse when he served in the 1960s and 1970s. “He was someone that people viewed with… such respect,” said Allen. “He was so highly respected. He was the one everyone knew was on the straight and narrow. He is someone I will always remember.”

“The apple doesn’t fall from the tree, and so we have Senator Kip Bateman here,” said state Senator Nia Gill (D-34).

“I don’t think you could find another gentleman like Ray Bateman,” said state Senator Dick Codey (D-27), who counted the late senator a lifelong friend. “He was in every possible way a great human being. …All of us, Democrats and Republicans, we’re proud of Senator Bateman.”

Moved by the words of his colleagues, Senator Kip Bateman took the floor of the senate.

“I want to thank you all for your sympathies,” said the senator. “Outside of his family, his second love was this institution and the people of New Jersey.”

The Batemans wanted to have their patriarch forever.

But, the senator said, “We were thankful to have him for 88 years.” 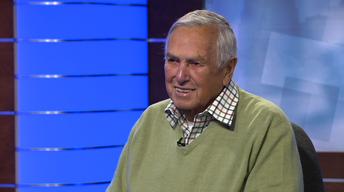