Let’s stipulate that leftist folk singing legend Pete Seeger wrote lovely, lyrical songs. The anti-war ballad “Where have all the flowers gone?” is one of his best known. Where do the flowers go? The flowers go to young girls, who go to husbands, who then become soldiers. The soldiers get killed—implicitly slain in senseless wars. Their bodies go to graveyards, where new flowers grow. “When will they ever learn?” Seeger asks plaintively.

The song is beautiful. Vietnam War protestors loved the message. The poetry justified “hell no, we won’t go” draft resistance.

However, when considered in the larger context of the Cold War—and the Vietnam War was a war within the Cold War—the song served as a subtle cultural attack on America’s will to defend liberty against Communism. It delivered a propaganda message that ultimately benefited the Soviet Union. To whit: Why resist? All fighting is so stupid—isn’t it, so senseless?

Once that emotional sensibility is established, the propagandist adds something like “Besides, capitalism creates war. Communism creates peace.”

In the 1950s Seeger believed that nonsense to be bedrock truth. Seeger unflinchingly supported the Soviet Union, or at least its goals. He confronted the House Un-American Activities Committee (HUAC). He adamantly asserted his right to free political speech, the one guaranteed by the US Constitution’s 1st Amendment. Little wonder he ranked high in The Nation magazine’s pantheon of hard left heroes.

Then the Cold War ended, revealing in brutal detail the Soviet Union’s heinous crimes—the crimes of Communism. Even Seeger caught glimpses of the mass murdering, poverty producing truth. Why he, Pete Seeger, poet of peace, had been waging War On Honesty, for several decades. In 1995 he expressed a touch of remorse when he acknowledged that he had followed “the [Communist] party line so slavishly.”

However, Seeger could never quite bring himself to admit he’d been a Stalinist dupe and that Communism is simply Red Fascism.

When he died, The Atlantic bewailed his “romance with Stalinism.”

“As late as the 1970s, in his column in the left-wing folk magazine Sing Out!, Seeger was giving space to horrifying ideas. Dealing with the case of Wolf Biermann, a socialist singer expelled from East Germany for dissidence, he gave space to correspondents arguing that there might appropriately be limits on what artists should say in an ideal Marxist regime. In 1999, he accepted an award from Fidel Castro’s regime. It’s hard to square these actions with the ideas Seeger promoted elsewhere, and they deserve condemnations.”

In 2015 Mother Jones still regarded Pete Seeger as a cause celebre because he had been spied on by the U.S. government “because of his political views and associations.” Seeger was a stellar—and early—example of the “I’ll have my rights but you don’t get yours” lefty.

When it comes to the Second and Fifth Amendment, Congressman John Lewis (D-North Korea), a major figure in the great House of Representative gun control sit in tantrum, echoes Seeger’s hypocrisy.

What if Republicans had violently assaulted Democrats attending a Clinton rally?

“John Lewis, once a civil-rights leader, is today leading a movement to strip Americans of their civil rights based on secret lists of subversives compiled by police agencies and the military. Perhaps it has not occurred to Representative Lewis that his mentor, the Reverend Martin Luther King Jr., also was on a secret government list, as indeed was Lewis himself under the watchful eye of J. Edgar Hoover. Democrats demand that Americans be stripped of their Second Amendment rights with no attention paid to the Fifth Amendment, to due process. They propose that Americans be stripped of their legal protections under the Bill of Rights even when they have not been charged with, much less convicted of, a crime. They propose that this be done on the basis of a series of secret government lists, whose contents, criteria, and keepers are treated as state secrets. You cannot call yourself a ‘liberal’ and endorse that. You cannot call yourself a ‘liberal’ and endure that.”

Williamson also reminds us that “In September of 2014, Senate Democrats voted to repeal the First Amendment. They were enraged by a Supreme Court decision holding that ordinary constitutional protections for free speech prohibited the government from punishing political activists who had shown a film critical of Hillary Rodham Clinton in the run-up to the 2008 presidential election.”

Congressman Lewis certainly styles himself as a man of the Left. The German novelist, Nobel Prize winner Gunter Grass was a man of the European Left. His leftist politics definitely advanced his literary career.

When interviewed by The Paris Review he claimed that during World War II he served as a gunner on a tank.

In other interviews and in biographies he asserted he had served in the German Army, the Wehrmacht.

In so doing Grass waged War On Honesty and war on accurate history. He was a member of the Nazi Waffen SS. He served in 10th SS Panzer Division. For years he hid this truth. Yes, he was a Nazi. It was easy for Grass to move from “brown to red” (meaning from “brown shirt” Nazism to hard left “red” socialism). As a Nazi, Grass shot at Americans. As a hard left socialist, he criticized American society and defense policies, then bridled with virtue signaling anger when he was accused of being anti-American.

Well, dammit, the SS solder was anti-American. He didn’t like Ronald Reagan, not at all. He claimed he had quarrels with Communists, but during the Cold War his political and literary activities, like Pete Seeger’s, benefited the Soviet Union.

Which brings us to another “man of the left”—this time the American academic left—who had a hidden Nazi past. At one time Belgium-born Paul de Man was the toast of American left-liberal literary academic criticism. Why, De Man was not just a critic, but a theorist. He had a ritzy faculty slot in French and Comparative Literature at Yale where he espoused “deconstructionism.”

I won’t bore you by going there. Deconstruction is just ism-ized sophistry that says you really can’t say anything that means anything. Got that? De Man’s “critical theory,” such as it was, influenced “post-Modernism” which can mean many things, but includes doubt about Enlightenment rationality and, well, truth, as in facts. In other words, for postmodernists, everything is deniable. Why, Hillary Clinton was shot at by snipers in Bosnia—if she thinks it happened—and who the hell are you to say otherwise?

Postmodernists wage War On Honesty using a lot of French phrases and academic circumlocutions. Ultimately, postmodernists believe only in power, as in having political power and the will to impose a meaning—their meaning.

De Man’s “critical theory” that facts are not facts and you can’t know nothin’ was perfect psychological camouflage for a man hiding a sordid Nazi past. After he died his doting disciples discovered he was a Belgian Nazi collaborator. He was also a Nazi propagandist and wrote anti-Semitic screed. De Man’s “critical theorizing” was shtick to cover his Nazi tracks.

At some point in a presidential election year, every Republican presidential candidate is labeled a fascist by leftists.

So, where have all the fascists gone?

On a CBS 60 Minutes segment filmed in the 1970s, Ronald Reagan provided one of the most succinct definitions of fascism, and connected it to the liberal left.

Jonah Goldberg’s book, Liberal Fascism, expands on Reagan’s insight and makes a thorough case that Fascism and Communism are indeed both left-wing movements. Both advocate state control of the economy. In practice that leads to authoritarian or totalitarian political control—in other words, dictatorship. Nazis were National Socialists.

Of course most mainstream media fail to understand fascism’s left wing origin. As a result, the insult “fascist” is liberally mis-applied to American conservatives, whose political philosophy (like Reagan’s) has libertarian roots emphasizing individual liberty. At some point in a presidential election year, every Republican presidential candidate is labeled a fascist by leftists. Mainstream media, instead of disputing the charge, tend to repeat. The charge still has a sensational edge. Ronald Reagan was called a fascist.

As the New York Sun notes, in 2016 Donald Trump is being called a fascist. On May 18 The Washington Post—the very definition of a mainstream media outlet gave Robert Kagan big time editorial space which Kagan used to make the accusation that Trump is a fascist. Kagan makes the statement that “Fascist movements (of the past) had no coherent ideology, no clear set of prescriptions for what ailed society.” That’s more or less correct, but most Fascists with a big F claimed to be socialists—Benito Mussolini for example.

Kagan is conflating devils. We’re supposed to associate Trump with those mass murderers. Missing from Kagan’s initial conflation of strong men is Joe Steel—Joseph Stalin.  Stalin receives indirect mention in a late paragraph, but as a purveyor of show trials. Slippery, that. Completely missing is Chairman Mao Tse-Tung. Hey, Kagan, did Cambodia’s Pol Pot have a coherent ideology? Pol Pot decided he would kill off Cambodia’s bourgeoisie (The Killing Fields) and build a Communist paradise on a new demographic tabula rasa. That coherent?

Kagan’s essay amounts to little more than partisan Democrat anti-Republican screed. He accuses the Republican Party of being the “incubator of this singular threat to our democracy.” (i.e. Trump the fascist.) That’s pernicious political theater as a sanctimony tantrum.

How does Kagan understand the violent anti-Trump demonstration in Albuquerque, New Mexico on May 24, followed by outright physical attacks on Trump supporters in San Jose, California on June 2?

The ABC News report: Physical assaults on political opponents—that’s not just inexcusable, it’s criminal, and, for the historically correct, it is similar to European fascist street attacks on political adversaries in the 1920s and 1930s.

But don’t tell that to the Huffington Post’s Jesse Benn.

Dig the essay he wrote that was published on June 6, D-Day. Benn blames all violence at Trump rallies on Trump. It’s the “you made me do it” attempt to escape from agency and responsibility.

It’s really a shame to give this benighted popinjay a link, but Benn is not only justifying the violence against American citizens, he’s wants more.

So does Vox deputy editor Emmett Rensin, who tweeted “Advice: If Trump comes to your town, start a riot.”

Advice: If Trump comes to your town, start a riot.

What if Republicans had violently assaulted Democrats attending a Hillary Clinton rally?

Where have all the fascists gone? Look left, to the American Left and the militant authoritarian wing of the Democratic Party. 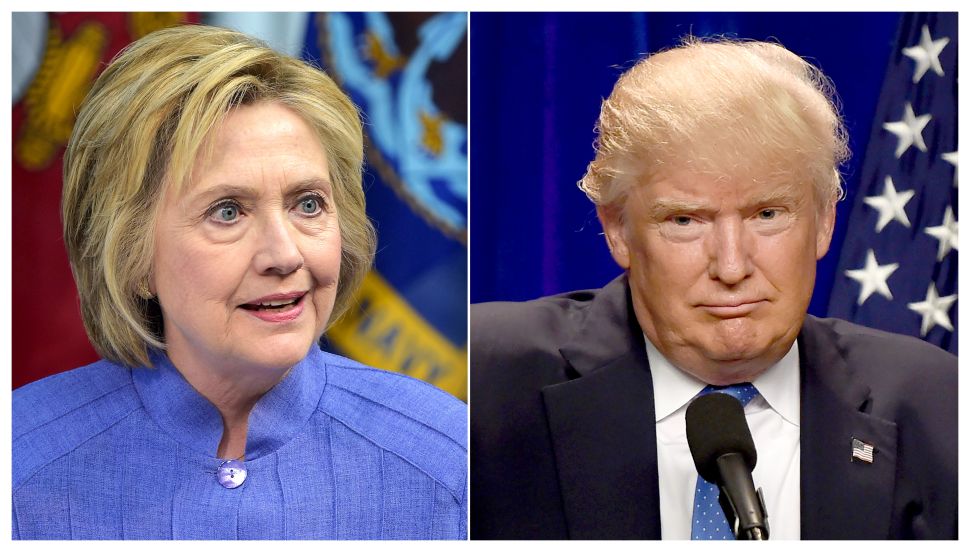