A hit song is a tricky thing. Every songwriter hopes to have at least one. And although it might buy them a new house (or more like a motorcycle these days considering the rate that musicians are paid per download) hits often become something of an albatross with time.

No matter how hip a band might be in their early years, they inevitably face the predicament of hitting the wall following the success of a body of work which their audience expects to hear every time they take the stage. There’s only so many times anyone can play the same material and still have it retain its original spark.

Credibility also looms big. Take Mick Jagger, a septuagenarian multi-millionaire rock star bitterly spitting “(I Can’t Get No) Satisfaction” or Gordon Gano from the Violent Femmes, now 53, begging the question, “Why can’t I get just one fuck?”

While seemingly ridiculous, the song still elicits a roar of solidarity from the Femmes’ crowd. That gush of bro sympathy is not only projected from a throng of sexually frustrated teenagers but from 50- and 60-somethings with receding hairlines and bulging bellies as well, who have once more found themselves faced with a similar conundrum.

“I’ve been thinking about that song lately,” Gano told the Observer. “I was a teenager when I wrote it. But at what point does sexual frustration end? So it turned out to have greater longevity than I imagined.”

While we’re on the subject of aging, it’s been 16 years since Violent Femmes have released a full-length album.

In the interim there have been a variety of solo projects from Gordon Gano and Brian Ritchie, sundry drummers have come and gone, including original member Victor DeLorenzo, and a nasty lawsuit in 2007 between Ritchie and Gano which erupted over the use of their infamous smash “Blister in the Sun” for a Wendy’s commercial.

In April 2013, the Femmes buried the hatchet and played Coachella and a handful of other high-profile gigs. Two years later they released Happy New Year an EP which featured “Good for/at Nothing,” arguably the best anthem of disenfranchised youth since Beck’s “Loser” along with “Love Love Love” which likened the overwhelming obsession of humanity to nothing more than “a chemical imbalance in the weak of mind.”

Since the release of their third album, The Blind Leading the Naked in 1986 (in which the Femmes, produced by Talking Heads’ Jerry Harrison, first began stretching the boundaries of their signature style) the band has struggled to regain their fastball. While “American Music” and “Nightmares” are great, catchy songs by anyone’s standards, critics and fans alike have stubbornly compared whatever the Femmes served up to their first two albums.

No matter how they fought among themselves or how oddly unpredictable their solo projects have been, their fan base has remained loyal. In fact, it has only continued to grow. With the Femmes’ appearance on The Late Show on February 24, jamming with Stephen Colbert on “Blister” and the subsequent release of their latest offering, We Can Do Anything, the band is currently in the midst of a serious comeback.

“The new album runs the gamut of American roots music more than anything we’ve done since Hallowed Ground,” Ritchie explained. “It places us in the context of a repository of American music from pre-rock to punk. The songs, as usual, deal with mental illness, fantasy and sex, but maybe with a slightly more mature view. But not much!”

Speaking of insanity, the new album kicks off with, “Memory,” which turns out, is not an anthem to Alzheimer’s after all.

“I actually wrote that one in my 30s, looking back at my 20s, thinking things actually get better with age,” Gano pointed out.

“’We Can Do Anything’ is one of the oldest songs on the album, I wrote it nearly 30 years ago. It was originally inspired by a cartoon a friend was making. It’s a story song, like ‘Country Death Song.’ It has nothing to do with me. I just wrote it and tell the story of Bongo killing the dragon. Friends tell me their 3-year-olds dance around and sing it. A good children’s song should be something that adults can enjoy too. But it’s a difficult song to play, the way it changes from major to minor.”

Either way, it’s great to hear the band having so much fun.

“‘Issues’ was a great collaboration, a kind of blind date songwriting session with Kevin Griffin [from Better Than Ezra] and Sam Hollander. Kevin had some chord changes and the first two lines, the story telling aspect of the song was mine. The song tells a short story that comes with a twist at the end.”

While we’re on the subject of sneaky twists, what’s the deal with “Big Car?”

“Within the band, ‘Big Car’ has created the most controversy of almost all Violent Femmes songs. Someone has always found it unacceptable because of what happens at the end,” Gano said with a laugh. “But it’s like a Cohen Brothers film where you’re enjoying the movie but then there’s this terrible surprise, like finding a head in a box (Barton Fink) or there’s a grinding noise and there’s al this blood and one of the characters has wound up in the wood chipper (Fargo). Stuff like that happens in movies all the time. So why wouldn’t it occur in songs?”

“We are starting to operate as we probably should have from the beginning and skipped the conventional music industry stuff,” Ritchie said.

“I see a lot of potential for the band. The things that personally inspire me now about the Femmes are the new audience, the great band lineup with young musicians who actually grew up with the Femmes (new drummer John Sparrow and saxophonist Blaise Garza, along with veteran multi-instrumentalist/utility infielder/producer of the new disc, Jeff Hamilton) being independent and putting out our own records and the DIY attitude of our production and cover art. Also looking out and seeing young faces who might be seeing us for the first time or even their first concert at all. That keeps us on our toes. It’s a mandate to rock. We keep the old material fresh by incorporating improvisation into everything we do. That’s the difference between us and other pop or rock bands.”

Over the years the Femmes drum chair has been occupied by a handful of percussionists, beginning with Victor DeLorenzo who helped forge the band’s original sound by introducing various cans and buckets that he poetically dubbed the “tranceaphone” and “stompatron.”

That radical tradition continues with the recent addition of the Weber grill to the Femmes’ sonic arsenal. A few years ago the band was performing on a Montreal TV show when Brian Ritchie spied a charcoal cooker in the corner of the studio which he suggested that percussionist John Sparrow play. “It sounded great!” Sparrow enthused. “It had a ride cymbal like

So will Violent Femmes fire up the grill on stage and pass out brats and tofu dogs to their Brooklyn crowd? “You never know what might happen on stage with Violent Femmes,” John Sparrow said knowingly.

Violent Femmes will be appearing as part of the Prospect Park Celebrate Brooklyn Series on June 18 following an opening set by Kirsten Hirsch at 7:30 p.m. Admission is free. 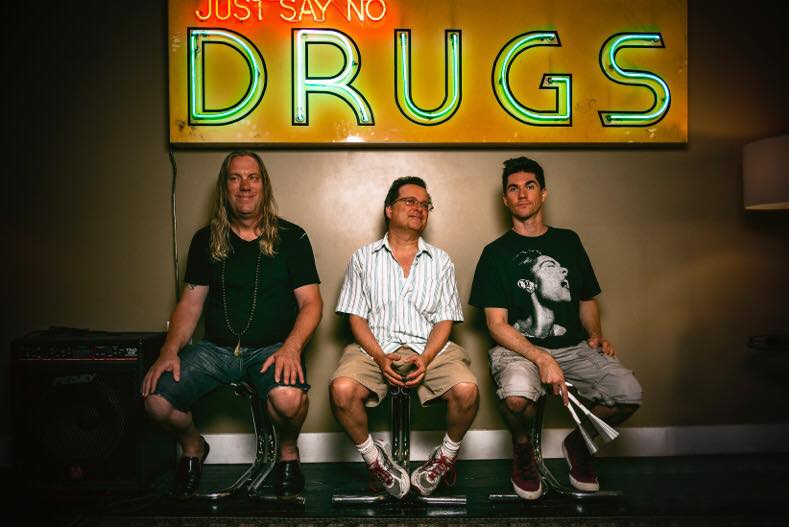