“Bernie Sanders is a total ignoramus when it comes to the Middle East,” says civil liberties lawyer Alan Dershowitz. “But it is part of the package. [These days] if you want to be regarded as progressive, you’re anti-Israel. He knows if he wants to get progressives, he needs to be anti-Israel.”

Constructing the coalition of MoveOn.org-types he has galvanized to give Hillary Clinton a run for her money among Democratic presidential primary voters who have shifted hard to the left in the past decade, Sanders’ statements about the Palestinian-Israeli conflict have ricocheted from ill-informed to inane. He sometimes sounds ridiculous—but that is a negligible price to pay for the avid support of anti-Israel activists who play an important role in fueling his campaign.

Asked by the New York Daily News to explain his assertion that Israel’s effort to stop Hamas from firing thousands of rockets from Gazan neighborhoods into Israeli civilian centers in 2014 was “disproportionate,” Sanders sounded more like Mr. Magoo than William Jennings Bryan, offering an account of civilian casualties that was wildly inaccurate. “Anybody help me out here because I don’t remember the figures, but my recollection is over 10,000 innocent people were killed in Gaza,” he told the paper. “Does that sound right?”

It didn’t, and wasn’t. Even by Palestinian versions of who were civilians and who weren’t, Sanders was off by about 700 percent. Nor was the reason for the civilian casualties difficult to apprehend. Hamas, which had initiated similar rocket campaigns in 2008 and again in 2012, started a two month-long rocket barrage directed at Israeli civilians, doing so from Gazan hospitals, homes and schools. It did so precisely so that when Israel tried to stop the attacks, the Palestinian civilians about whom Hamas professed to care would be killed or injured. It also built an incredibly elaborate tunnel network under Palestinian homes, designed to enable Hamas gunmen to launch deadly attacks on Israeli civilians, so that there would quite literally be no way of preventing the attacks without loss of innocent life. It did not necessarily require an ethicist to assign moral culpability here—and when pressed to say what, exactly, Israel was supposed to do in this situation other than what it did, Sanders babbled that he hadn’t a clue. “You’re asking me now to make decisions not only for the Israeli government but for the Israeli military, and I don’t think I’m qualified to make decisions.”

Not qualified to opine on what Israel could have done to prevent loss of civilian life when confronted with Hamas rockets and tunnels, Sanders nevertheless felt perfectly qualified to accuse it of having been “disproportionate” in its response. The then-Chairman of the Joint Chiefs of Staff, General Martin Dempsey, told the Carnegie Council for Ethics in International Affairs in New York City that Israel deserved praise for going to “extraordinary lengths to limit collateral damage and civilian casualties.” “The I[srael] D[efense] F[orces] is not interested in creating civilian casualties,” said Dempsey. “They’re interested in stopping the shooting of rockets and missiles out of the Gaza Strip and into Israel.”

Sanders did not know the facts and had no clue what Israel was supposed to have done, but he did know the proper line: Israel had been “disproportionate.” That seemed to define the limits of his knowledge. Asked by CNN’s Jake Tapper about criticism of his remarks by Michael Oren, who served in Washington as Israel’s Ambassador to the United States from 2009 to 2013—at the same time Sanders was a United States Senator—Sanders was stumped, and asked Tapper to throw him a life-line. “Who’s Mr. Oren?” Senator Sanders asked.

Sanders’ logic has been at times difficult to follow. Israel has a right “to take all actions that are needed to protect itself from terrorism” he intoned last week in an interview with the Los Angeles Times, but those actions evidently do not include trying to stop a terrorist organization from raining missiles down on its population. He did not always sound quite so vapid. “You have a situation in which Hamas is sending missiles into Israel,” he told a Vermont town hall meeting during the 2014 Gaza war. “And you know where some of those missiles are coming from? Populated areas. And that’s a fact.”

But that was before Sanders was running for President, and Dershowitz’s point is that a fashionable anti-Israel line that had once been the domain of the hard left has not only leeched into a substantial segment of the Democratic Party base but threatens to swallow the party altogether. It is a mark of how correct Dershowitz is that the Sanders campaign could hire as its national Director of Jewish Outreach one Simone Zimmerman, whose pronouncements on the Mideast conflict included such triumphs of sobriety as the accusation that Israeli Prime Minister Benjamin Netanyahu had “sanctioned the murder of 2,000 Palestinians” and her now-famous Facebook post: “Fuck you Bibi.”

For the past 30 years Dershowitz has been by far the preeminent maker of the progressive case for Israel, churning out books and articles debunking leftist critiques of the conflict, speaking on campuses and at symposia and encouraging others to do the same by his example. He is not only the pro-Israel debater that critics of Israel fear most; he is the only pro-Israel debater they fear. He has dispatched whack job Norman Finkelstein, linguist Noam Chomsky and Arab-American leader James Zogby among others in debates, and his ease and obvious relish in doing so has not done much to dilute the vitriol long directed his way by the anti-Israel crowd. “I didn’t set out to do that,” Mr. Dershowitz says. “I set out to be one of many liberals who make the case for Israel.”

But between pro-Israel progressives becoming so disgusted by the left that they have given up and the hubris of a Jewish establishment that erroneously thinks it can sustain American support for Israel by nurturing only the right, the pro-Israel community finds itself bereft of progressives who can join Dershowitz in the public square—let alone take his place. Put simply, there is no “bench.” Mr. Dershowitz puts it even more simply still. “The problem is that I’m seventy-seven fucking years old,” he says, partly incredulous that that could have happened, partly exasperated that other pro-Israel progressives have not been prepared to step in to shoulder the burden.

The Harvard Law professor notes that, in academia, the wave of anti-Israelism has morphed from mere fashion to a strictly-policed orthodoxy, and academics who privately reject the nonsense that characterizes the Mideast debate fear exclusion from academic appointments and opportunities, retaliation by anti-Israel colleagues or retribution by anti-Israel students.

“The left,” Mr. Dershowitz says, “has learned how to punish others on Israel. People whisper to me, ‘Thank you for speaking out.’ I say, ‘Why don’t you speak out?’” But he understands how the anti-Israel ugliness in academia works. “If I were a young assistant professor seeking tenure,” he says. “I am not sure I would let my pro-Israel views be known.”

Academics from around the country confirm Mr. Dershowitz’s contention that anti-Israel forces have created a climate of fear on American campuses that causes anyone actually seeking career advancement to think twice before speaking out on Israel’s behalf. One Boston-area university provides a case in point. In 2013, reports surfaced that students and faculty both felt too intimidated to challenge anti-Israel faculty members. The Anti-Defamation League contacted a tenured law professor who was among those raising concerns. He said he wanted to describe his experiences, but asked if the caller could please call him back that night at home, explaining that the walls in his law school offices were thin and he did not want to be overheard. A Jewish Studies professor at the same school who had privately opposed a Modern Language Association resolution targeting Israel was asked why she refused to state her opposition publicly. Her answer: She was afraid it would hurt her academic career. “I don’t need that,” she said.

It is a new “mainstream hard left” that has scared the dickens out of academia and which threatens to push the Democratic Party to alter its long-standing position on the Mideast conflict at this summer’s Democratic convention, says Dershowitz. He is unsurprised. “The left always speaks louder than the right,” he says. Of the Sanders campaign’s effort to yank the Democratic party platform to the left on the Mideast, Dershowitz says “It could hurt Clinton badly in Ohio, in Pennsylvania, in Florida, in New Jersey. It’s a dumb, dumb mistake and it could cost Hillary the election.” But those responsible are uninterested in the consequences. “They couldn’t care less who wins the election.”

Dershowitz estimates that he spends half his time hammering away at those who hold themselves out as progressives but ally themselves with reactionaries in order to attack what remains the only progressive country in the Mideast. There is hardly an attack that has not been leveled at him. “The left has made it expensive,” he says wryly. But even at 77, Dershowitz shows little interest in letting up or backing down, and no sign of doing so. 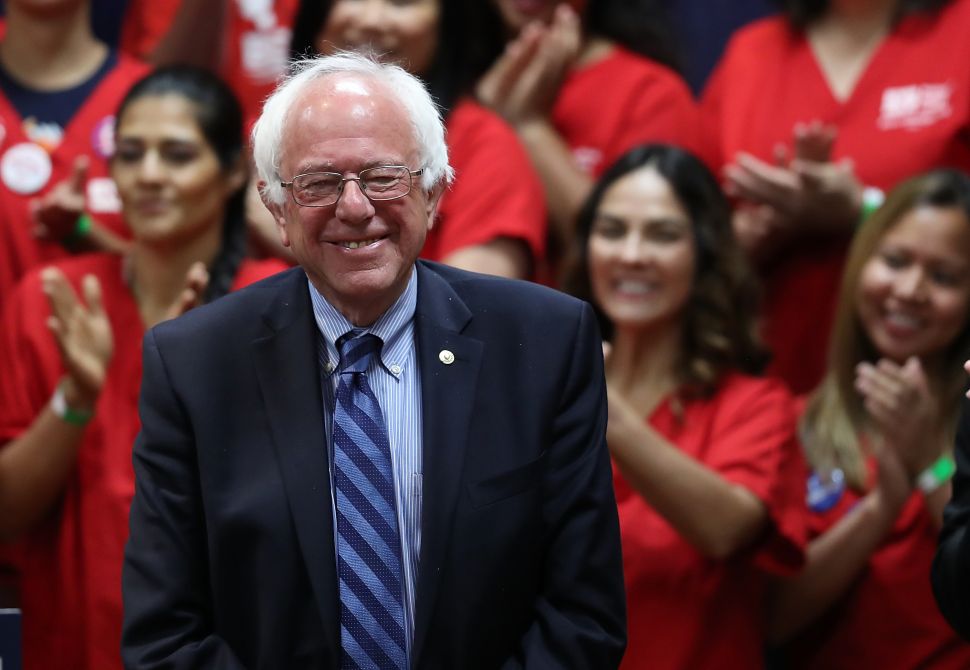