Unless one is a Republican candidate running for election and speaking on the rights of the unborn versus those of the born mother there is little public discussion on the issue of rape.  Maybe this is due to the fact that there is no political will among the, largely male, political sphere to step into the lions’ den for more than half of the populace.  In large part, I suspect, it is because of a curious American Heisenberg-esque trait that something only exists once it is acknowledged. For myself, it is because I aspire, often without success, to wit and little fodder is found in the topic of sexual assault.

I write now on the issue of the Stanford Rape case, not to presume that my commenting on Brock Turner will shame him further, but rather out of a selfish compulsion for catharsis at the seething anger at how we, with our collective passivism, have failed the victim. That Judge Aaron Persky thought it was appropriate to give a convicted rapist – where I come from penetration without consent is rape – six months in a county jail and probation for three years is our shame. That the rapist’s father, Dan Turner, felt comfortable to air publicly that his son’s crime was only “twenty minutes of action,” and moreover that Persky was not immediately reviled by this, is our shame. That Turner’s friends, comrades and teammates neither stopped him nor came down in universal condemnation is our shame. That Lady Justice has not given the victim a warm embrace but rather the cold shoulder is to our shame. It is difficult to wrestle a stream of consciousness dominated by remorse, revulsion, rage and apathy into any form of coherence. Maybe Al Pacino encapsulated my feelings best in Scent of a Woman when he proclaimed “If I was five years younger, I’d take a flamethrower to this place” and from such a position I unashamedly start.

What father could not show a shade of empathy to another, when his progeny is responsible? I think of all those nights diapering, holding and nursing one of my own daughters and feel that if is this was one of mine, I would rampage.

At the criminal bar in the UK, the “cab rank” rule dictates that you take the cases you are given, and I occasionally defended people charged with sexual offences. I always found it difficult, probably because it is a crime that I never understood. My usual bread and butter was drugs, fraud and the occasional murder, but it was usually gang on gang, criminal on criminal or criminal versus the state. While certainly not my mores, the shooting of one drug dealer by another was emotionally neutral and easier to rationalize, when approaching the question “How am I going to get this guy off?” When it came to rape or its variants, I was not very good at it, as my heart wasn’t there because the cross-examination of a rape victim is probably one of the hardest jobs in the world, and coming from an over-privileged male, it never sounds good and I do not do well with crying. Also, in my view, the rapist is particularly divorced from humanity to have committed such a violation on a fellow human being for no better reason than animalistic urges. From what I have seen, that can never be rehabilitated.

Dan Turner, by terming Brock Turner’s actions as “twenty minutes of action” reduces the horror of his son’s acts and demonstrates that he, his role model is undoubtedly part of the problem. This man subjected another person to repeated, vile violations over a sustained period of time with neither thought nor care as to the other’s consent, bodily integrity or well being. What father could not show a shade of empathy to another, when his progeny is responsible? I think of all those nights diapering, holding and nursing one of my own daughters and feel that if is this was one of mine, I would rampage.

If we do not recognize or remediate, riots or vigilantism will ensue. It is clear that due to a culture of enablement, the young men in college are incapable of the type of self-regulation that we had on our rugby team at university. There was an understanding that there would be no taking advantage of girls who were too drunk, and that was strictly enforced. I knew of only one transgressor and I would be surprised if this man could speak properly ever again, for I know he needed extensive dental reconstruction. In the absence of proper, tough sentences people will take the justice business into their own hands. The origin of the prison system was where cities of refuge were established, where the criminal would voluntarily reside for fear of being killed in a blood feud or revenge killing which was legally permissible. If a victim, parent or family member does not feel that the system will provide justice, then action will be taken into their own hands. Of course, Dan Turner would be outraged at any mitigation by his son’s killer that “It was only one shot, in fact much less than twenty minutes of action.”

When we do not collectively fulfill our responsibility that justice is pursued, we as a society cannot live with ourselves. The peals of change now need now to ring clear, and an adequate starting point is the definition of rape in California which needs to be amended to include all penetration. In a similar vein, for a state familiar with mandatory sentences, a proper minimum term of imprisonment should be imposed by legislation, which can only be deviated from in certain exceptional circumstances. Most importantly, the colleges need to do some soul searching and those where athletes commit multiple sexual offences over a period of time should be banned from all competition. This should start the ball rolling and hopefully from this disgrace some humanity can be regained. 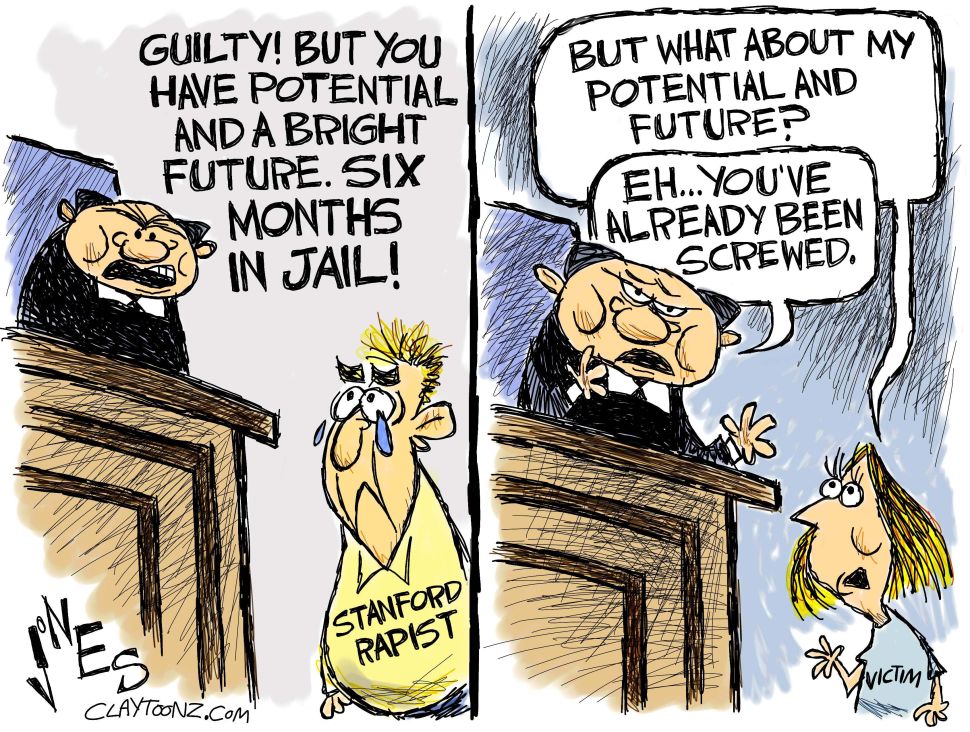