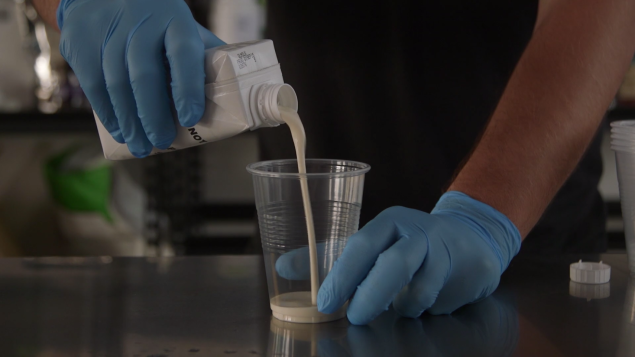 Sean Raspet is not a scientist, but most days you can still find him tinkering in the lab. For Raspet, a Los-Angeles based artist, his day job as a flavorist at the meal supplement startup Soylent and his work in the studio often mix—literally. Raspet’s art consists of small batches of chemical formulations he’s tweaked molecule by molecule to vary slightly in flavor in scent. Two of his flavors were recently manufactured as food products by Soylent, called Technical Milk and Technical Food, and for a 2014 installation at San Francisco’s Jessica Silverman gallery he applied a scratch and sniff emulsion to the walls based on the scent of the space’s air. To the layman, his art may be perceived as highly scientific. Not that coffee lovers at Art Basel in Switzerland this week will care all too much when Raspet debuts his latest creation. For them, the free goods will simply sweeten their day.

The artist has teamed up with Art Basel’s biggest corporate sponsor, UBS, and the Swiss Institute, to craft a specially flavored artificial sweetener that’s being served to the public at the Planet Art Lounge inside the fair. It’s part marketing, part art, and visitors who stop by will get one free cup of coffee or cappuccino, from Berlin roasters Andraschko, flavored with a tiny amount of Raspet’s designer sweetener.

“It tastes like art, and makes you think,” UBS executive director of global sponsorship Peter Dillon told the Observer by phone. “It sort of sits on the back of your tongue; it’s distinctive.”

That’s just one take. At least 300 people stopped by the lounge to sample Raspet’s concoction during the opening night of Art Basel’s Unlimited, a section devoted to large-scale installations and new media.

At New York’s Frieze art fair in May, Raspet’s project with Société Berlin gallery and Soylent was a breakout hit. Instead of filling his solo booth with artwork, he opted instead to bring refrigerators full of Soylent, which was distributed for free to fairgoers by representatives from the startup clad in spacey gray suits. Was it art? Was it a marketing ploy? These are the questions we attempted to unravel in our previous report on the project while slurping down the soupy substance, which claims to contain all the essential nutrients a human needs to sustain life. By the end of the fair, we still remained skeptical.

However, the booth at Basel is more low key, said Dillon, and Raspet’s sweetener was in the works long before his Soylent stunt made the news. A film on his home brewed flavors plays on a screen, and features Raspet discussing molecule-swapping and why there’s a public misconception that artificial means bad.

The underlying message behind his project—described in a statement as “unlinking experiences of scent or taste from a conception of the ‘natural'”—may sound a lot like Silicon Valley rhetoric, masquerading as art. But according to Raspet there’s real science behind his thesis.

We wrote to the artist for further, much needed, explanation as to why he’s on a mission to clear artificial foods of their bad rap.

Do you have a background in science and health?  My background is in art primarily, but I’ve done some study of chemistry as well. Most of my knowledge of flavor chemistry is self-taught. It’s more intuitive since it doesn’t involve synthesizing chemical compounds, but rather mixing them together in the right proportions to get the desired effect. It’s a lot like perfumery in that way.

How did you end up working with chemicals, and food, as your medium? Part of what led me to working with these kinds of materials is that I think it is reflective of the paradigm of production of our society: a chemical paradigm I would say. Wanting to work with that paradigm and to produce artworks using the most basic aspects of material—purified molecular compounds—is what initially drew me to this way of working. 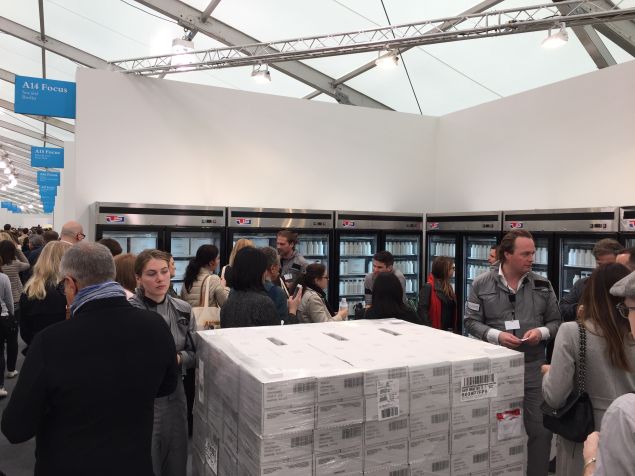 I saw your project at Frieze NY, with Soylent. How did that come about? Société Berlin gallery, which represents me, wanted to do a project at Frieze and I thought let’s do a trade show promotional booth for Soylent. It fits with other aspects of my work where I have tried to blur the line between the art economy and the economy of mass-production—not to “comment” about culture but to actually create products for use in everyday life. The economics of the art world and the mass economy are in many ways counter-posed in terms of ideas of quantity and singularity. So it’s interesting to try to collide those two spaces together and Frieze was an example of that.

Tell me about your project for Art Basel. I chose to highlight a single molecular compound called neohespiridin dihydrochalcone (NHDC). It’s a very interesting kind of artificial sweetener molecule that I have been working with in other formulations.

How would you describe the flavor of your sweetener? It’s a delayed onset sweetener. So at first you drink the coffee and it doesn’t necessarily taste that sweet. But as you continue to drink it, it gets sweeter and sweeter. Then an interesting thing happens if you happen to take a sip of water at some point while drinking the coffee. The water will suddenly taste extremely sweet. From my research it seems likely that the reason for these effects is that the molecule actually blocks the sweetness receptors on the tongue rather than activating them directly. As it blocks out the perception of sweetness the brain over compensates and things that normally wouldn’t taste sweet, such as water, suddenly become sweet as the molecule leaves the receptor.

You’re not creating sugar, you’re making a “sweetener,” which isn’t necessarily good for people. Or is it?  One aspect of food and flavor chemistry that people don’t typically consider is that of quantity. A lot of artificial sweeteners are hundreds or even over a thousand times sweeter than sugar…We all know that sugar can be bad for you: numerous studies have shown that a high-sugar diet can contribute to a risk for cancer and other health conditions. 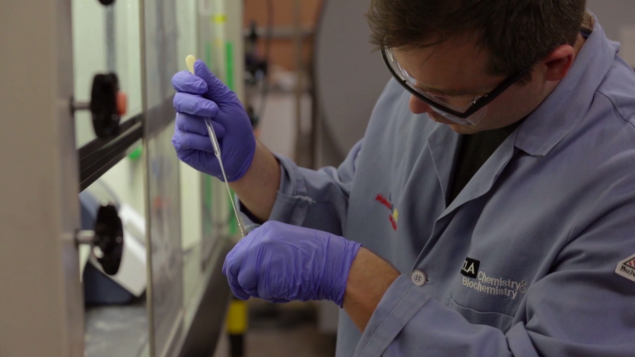 Raspet in the lab. (Photo: Still from "Sean Raspet on Artificial Flavors" by the Swiss Institute)

What are the health implications of the products you create, and where does that enter the conversation? Most studies that have been conducted on artificial sweeteners have shown them to be healthy at recommended doses. Even though there are other studies that raise some concerns with particular sweeteners, the general scientific and regulatory consensus is that they are safe.

Predicting the health effects of any substance is a very complex issue and there is never 100 percent certainty. But since the scientific consensus is that sugar significantly increases health risks and that artificial sweeteners do not, I would personally rather go with artificial sweeteners. Especially since food with sugar requires 100s or 1000s of times more of it to get the same sweetness effect as a food sweetened artificially. But that’s just my take on it.

What do you think of the negative stigmas attached to GMOs? Is there a reason to be wary of lab-created foods? I think the cultural reaction against GMOs is very overblown. And it comes from simplistic ideas of “nature” rather than from any scientific basis. Humans have been genetically modifying crops for thousands of years through selective breeding and other techniques (more recently pre-GMO irradiation has been commonly used introduce random mutations). The non-GMO techniques of modification actually change much more of the genome of the organism and introduce a much greater amount of mutations. Whereas a typical genetically modified crop will only have a handful of carefully targeted functional mutations introduced into its genome. It doesn’t make any logical sense to think that GMO techniques are somehow more dangerous than traditional forms of modification, and scientific studies conducted to date have shown them to be safe.

Why is it so important to redefine what’s “natural”?  The term “natural” doesn’t have any meaning from a scientific perspective. It’s a culturally constructed idea. The problem with this idea is that when it comes to food production and other cultural forms of production the “back to nature” or “all natural” idea of food can often have the counter-intuitive effect of being worse for the environment.

Organic farming generally produces a lower yield per acre than industrial farming. This means that typically more land and other resources have to be used to produce the same amount of organic crops. GMO crops can, in many cases, further increase the efficiency of crop yield. So a genetically modified, industrially farmed crop can potentially have a drastically lower environmental impact in terms of the amount of land, water and petroleum (to power farm equipment, irrigation pumps, etc.) used.

Ironically it is these simplistic ideas of “nature” in present consumer culture that are arguably doing some of the greatest harm to the environment. 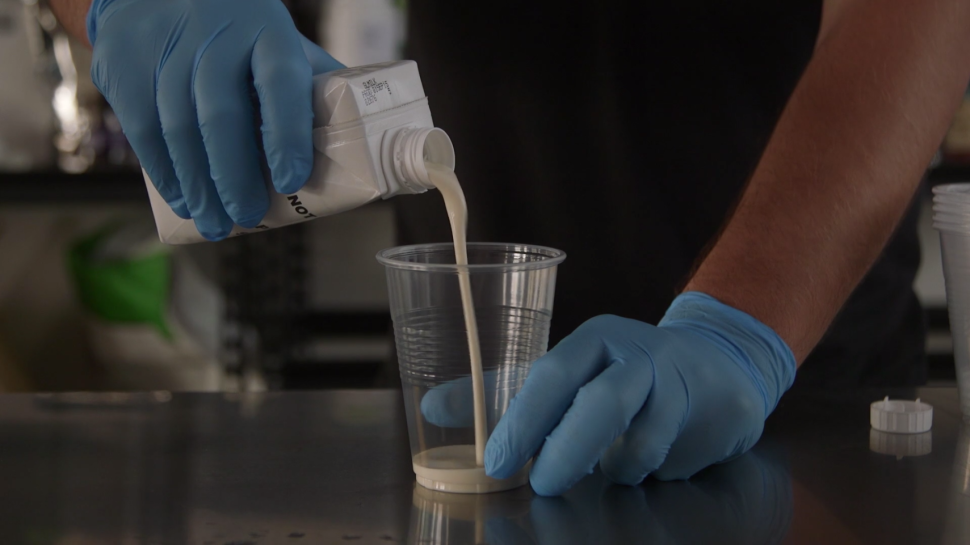