“Art is dangerous,” Toni Morrison cautioned last night during a rare gathering of genius at the Ambassador theatre. The Nobel Prize-winning author graced the stage alongside legendary poet Sonia Sanchez and Ta-Nehisi Coates, who has spearheaded the next generation of sociopolitical literature. The Stella Adler Studio of Acting hosted the event in order to spark a dialogue on the intersection of art and activism, as well as to bestow each of the guests with the studio’s Marlon Brando Award.

Before the doors opened, lines of eager ticket-holders had already grown restless outside the building, and the venue quickly became a full house. Yet despite the number of people in attendance, the atmosphere felt safe and intimate, perhaps thanks to singer, songwriter Toshi Reagon who lulled the audience with a sing along session right off the bat. Sanchez added a spiritual element, using poetic repetition and modulations in her regular speech, and also introducing both of her constituents with poems—beautiful, provocative ones written expressly for Morrison and Coates.

The gathering on stage felt more like talk between good friends … but that’s likely because the conversation was just that. Sanchez assumed the role of moderator, asking most of the questions, but rather than marching through a list of questions pertaining to “art and activism” as planned, her questioning was unscripted.

Coates, 40, still recovering from a flight back to Paris, seemed to ogle at Morrison and Sanchez, hardly believing he was considered part of the same literary club. A bubbly Sanchez, 81, made light of her vertigo. A cool and eloquent Morrison, 85, spoke in a voice so warm and calm, it would be easy to listen to her talk for hours.

“[Artists] are the ones that tell the truth and it’s something that society has got to protect.”—Toni Morrison

Morrison, an early reader, recounted how she and her sister used to write notes to each other in chalk on the sidewalk, and that one day, not knowing its meaning, began to copy a dirty word written on the side of an empty house. “My mother burst out, screaming, ‘What’s the matter with you?’” she said, “So we ran away with tears in our eyes to get the materials to get rid of this language. I have to say she never said the word, she never explained the word, we never knew what it was, but I knew that if I wrote, other people exploded.” It was an anecdote that encapsulated the sheer weight of language and the effect it can wield, something Morrison’s readers know all to well.

When Sanchez asked Morrison whether editors are curators of culture, she replied, “They can be,” before igniting a stirring conversation about racial biases within the publishing world. Morrison recalled the challenges of, when working as an editor at Random House, trying to publish books by writers such as Gayl Jones. “[This] salesman said, ‘You understand, don’t you, that we can’t sell this book on the same side of the street?’ By which he meant, it’s a book about African Americans, and they will buy it or not, but we can’t sell it to the regular bookstores, which cater principally to white purchasers,” she said.

Somewhere along the way, Sanchez invoked Mohammed Ali, recalling a moment where her father called her over to watch him on Television; she likened him to a poet in his movements. “He was a clever boxer,” she said. “Not only was he boxing for himself, he was boxing for all of us.”

To close the evening, Jacqueline Woodson, who received a National Book Award for her book Brown Girl Dreaming earlier this year, presented the three speakers with their tangible awards—small star-shaped glass trophies, that despite their quaintness, looked insignificant relative to the wisdom they have given to their readers and listeners.

Morrison made sure to grab one more moment to address her listeners before they dispersed into the bustling streets of Times Square. “I want to remind you of the history of artists who have been murdered, slaughtered, imprisoned, chopped up, refused entrance,” she said. “The history of art, whether it’s in music or written or what have you has always been bloody … [The artists] are the ones that tell the truth and it’s something that society has got to protect.”

“As [writers] we are always suspect,” added Sanchez. 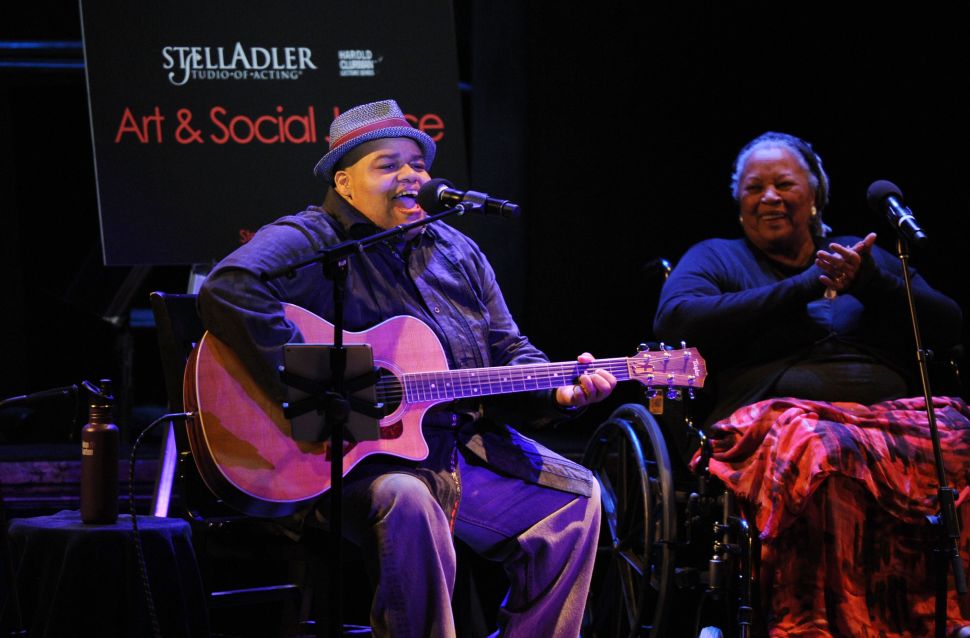