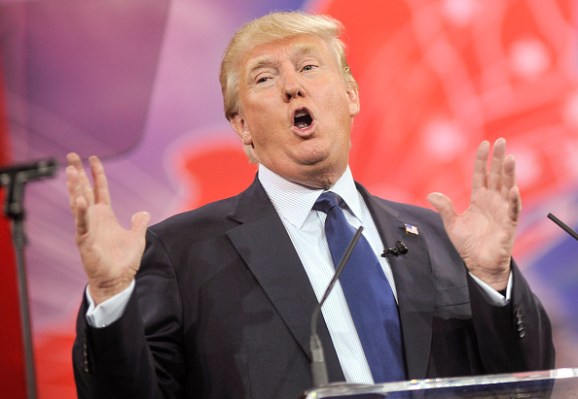 Following a primary night where Donald Trump netted close to 80 percent of the Republican vote in counties across the state, the first attacks against the presumptive nominee are emerging from Democratic organizations in New Jersey. The county slate in the Monmouth sheriff’s race issued a joint statement Wednesday calling on their Republican opponents to disavow Trump’s racially charged rhetoric.

“We expect office holders in Monmouth County to stand against racism, bigotry and anyone who would take advantage of hard-working middle class families and seniors,” wrote Democratic freeholder candidates Sue Fulton and Matt Doherty. “Donald Trump and his Trump University targeted and took advantage of countless people – and now he is attempting to defend that behavior with more bigotry and bias.

“Mr. Trump is the standard-bearer for their party; we need to whether our office-holders share Mr. Trump’s values, or whether they will put their community ahead of party loyalty.”

Fulton and Doherty are running against a Republican slate including Shaun Golden, incumbent Monmouth County Sheriff and chairman of the county Republican organization. Trump recently drew fire when he suggested that Federal Judge Gonzalo Curiel, who is investigating Trump’s unaccredited Trump University, was unfit to preside over the case because of his Mexican heritage.

The real estate mogul has made immigration his signature issue, pledging to build a wall along the United States’ southern border and revive the country’s manufacturing sector. Republican Speaker Paul Ryan denounced Trump’s comments, but said he would still be supporting Trump over Hillary Clinton.

While Republicans from competitive districts like the eleventh and sixteenth have more political incentive to walk the line of coming out against Trump while still hewing to their party, other lawmakers from less volatile districts have come out as comfortable with the candidate if not full-throated supporters.

Assemblyman Sean Kean (R-30) told PolitickerNJ by phone that he expects Trump will be able to drive Republican turnout, and that he supports him despite reservations about his statements on Curiel.

“At a minimum I think he’s going to be competing here and that’s better than we can say for the last three or four Republican presidential candidates,” Kean said. “On many levels he’s got the ability to appeal to Christie voters, who voted for Christie in the two terms.

“Going into a Middlesex, a Woodbridge, or an Edison, a town like that where it’s somewhat blue collar, I think he could do well with union voters and things like that, people that vote with their pocketbook.

“It’s going to be entertaining, that’s for sure.”

Trump has fierce proponents like Senators Mike Doherty (R-23) and Joe Pennachio (R-26) on his side, but Monmouth County Democratic Chairman Vin Gopal pointed to Christie’s low poll numbers and said he doesn’t expect Trump and Christie to benefit one another in New Jersey. Christie’s approval rating dropped ten points to 26 percent after he Trump’s first high-profile endorsement.

“He’s a Republican nominee for president who does not even have the only two living Republican presidents’ endorsements, either of the Bushes, doesn’t have the 2012 nominee,” Gopal said. “He has real fracturing.

“Christie’s approval rating is in the low twenties, he’s at an all-time low. Our internals in Monmouth have him low, and I think Trump’s temperament is going to be really called into question over the next several months.”

Gopal’s counterpart Golden was not immediately available for comment.