Yesterday Twitter announced its entry into virtual and augmented reality, prompting a sarcastic note at the opening of investor tracking company CB Insights’ daily newsletter. “Twitter’s strategy is becoming clearer by the minute,” its CEO, Anand Sanwal wrote. “Tell me you see it.” Maybe.

Virtual reality pioneers argue the the medium will be more social than we might have intuitively thought. As virtual reality hardware company Magic Leap’s Graeme Devine said during a keynote at Games For Change 2016 at the New School last week, the number one feature people say they want from augmented reality is for LinkedIn profiles to pop up next to people when they meet them. So what about tweets relevant to your conversation as well?

Both ideas are probably a bit too ham-fisted to be killer apps, but after attending multiple panels and discussions about virtual reality over the last few months, it’s become clear that an enormous gulf has grown between the public’s conception of VR as a buggy, Max Headroom-esque gamer diversion and the possibilities surfaced by today’s developers.

Devs working in VR:"We are just beginning to understand and are constantly surprised"

VR Skeptics:"We totally understand and it is stupid."

So what will the virtual reality experience be that convinces the public to revisit its preconceptions? Early experiments in the medium take two forms (though the lines between them are very fuzzy): experiences that work more like video and ones that work more like games. Which sort will generate the buzz that moves the reluctant masses to put their heads inside helmets?

The first time I ever tried VR was IndieCade East 2014 at the Museum of the Moving Image, when Oculus Rift let attendees try out a space dogfighting game. It was fine, but the first application that made me eager to strap a rig to my face was Tilt Brush by Google, which allows users to paint empty space in 3D. As someone who used to draw a lot, I wanted to try it out.

I got four minutes inside the system at Games For Change. You know how sometimes it’s a letdown when you finally get to check out something that you were sure would be incredible? Not this time. Painting on the surface of virtual air is magic. Full stop.

Ben Throop talked about his journey into VR entrepreneurship when he spoke at Downtown Brooklyn’s NYU Game Center in early May.  His game Headmaster, where players practice heading soccer balls, which will be included with Sony Playstation VR’s launch bundle (Super Mario Bros came with the original NES—so no pressure).

Prior to his talk, Sony engineer Richard Marks looked back on the company’s decision to devote resources to building a system that could pair with the company’s famous console. “A lot of people felt like we should do this, but we couldn’t justify doing it,” he said. “But then we felt like we had to do it.”

Console VR will be for the super users, but during a panel at Dumbo’s Made in New York Media Center in April, Sumeet Thadani said, “The real promise for VR this time around is we all have these super computers in our pockets.” Thadani is the founder of Presto, which is building a gesture system for smartwatches to easily add interactivity to mobile-powered VR systems. Some version of his point was made at every single conversation on the topic that we’ve attended.

Still, something has to convince people to find a Google Cardboard or Samsung Gear, download an app, stick their phone in the unit and figure out how to work it. In that way, VR has a strong parallel with podcasts. The medium is here. People are making interesting stuff, but most people have never tried it and they are daunted by the idea of learning how. VR proponents are waiting for that one piece of content that people have to try so they can join the conversation about it. VR is waiting for its equivalent to the Serial podcast from This American Life.

There have already been some works that have delivered powerful emotional experiences, but not so powerful to start a nationwide conversation.

‘I think the killer app is storytelling, we just haven’t really mastered it yet’

At the Dumbo event, Sketchfab’s Michael Calvert talked about an experience created to promote the film, The Walk, about the 1974 tightrope walk between the World Trade Center towers. The VR experience put people at the top of the tower, looking down. All they could do was take that first step. He said 1000 people strapped into the experience, but only seven took that first step.

It’s honestly a little hard to believe that the numbers were that bad, but reporting this story I played the Google Cardboard game, Nival’s In Cell VR. To play, you guide yourself around on these ropes inside a human cell, tilting your head to steer. Unlike a road, you can actually travel on any side of the rope, as if you’re driving a motorcyle whose wheels are made of mighty magnets; however, when you first start making that turn to spin upside down on the rope, your heart will definitely skip a beat. At least mine did. Even today’s mobile games can fool the brain.

At Techcrunch 2016 in Red Hook, Within founder Chris Milk said, “I think the killer app is storytelling, we just haven’t really mastered it yet.” Milk has created immersive films for brands like Saturday Night Live and Vice. VR enthusiasts treat him like one of the medium’s potential Spielbergs.

Milk might be right, but that story could come in the form of a game rather than the more cinematic stories that his team makes. “The gamers are really going to fund it,” Thadani argued. The money studios make by putting Gears of War in VR will pay for experiments that lead to its Citizen Kane.

“What is the equivalent of the feature film in virtual reality?” Milk asked, rhetorically.

But he might be wrong. Instead of storytelling cracking the public, it might be letting them make, like you can do with Tilt Brush. Further, it could be making something together. Panelists in Dumbo looked forward to multiple people going into the same VR environment at once, yet VR also seems to have real potential as something fun for one person to do while other people watch.

For example, Throop showed videos from a demo he did of Headmaster. It’s a game were players strictly practice heading the ball. He found it made for a satisfying party experience, because those waiting to play could watch the crazy gyrations of the player, while also watching the player’s perspective on an attached screen.

The team behind Fantastic Contraption, a VR game that comes bundled with the HTC Vive, emphasizes this social facet in its game trailer. The mania for Minecraft has already proven a multi-billion dollar appetite for creative games. If VR games prove to bring people together in real life in new ways, it could finally help video games themselves crack the general public as movies have. “A big social company is one of the leaders in VR right now,” Marks pointed out (Facebook owns Oculus Rift). With the Twitter news, another big social company is now on its tail.

So, perhaps VR’s equivalent of Serial will work more like Cards Against Humanity than it does The Wire?

Whether it’s the game makers or the storytellers who make the thing that cracks the average person’s imagination, both communities would agree with Milk when he said, “I think the connection to another person is what’s meaningful inside virtual reality,” though different pioneers in the space might mean it different ways. Milk meant it as democratizing the human experience, giving every human a chance to see life from other people’s perspective (see for example the film he did with The New York Times about refugees, The Displaced). That connection could also come in virtual social environments, which is how it got framed at NYU and in Dumbo.

The question is how do these creators get more people inside those helmets, make them lose themselves inside and have it pay when they do?  Having taken a tour through this world, I’m convinced that day is coming soon, but I can’t pretend to guess at what kind of work will do it. As Marks put it, “We are all trying to figure out how to walk in VR right now,” which is true in every possible way. 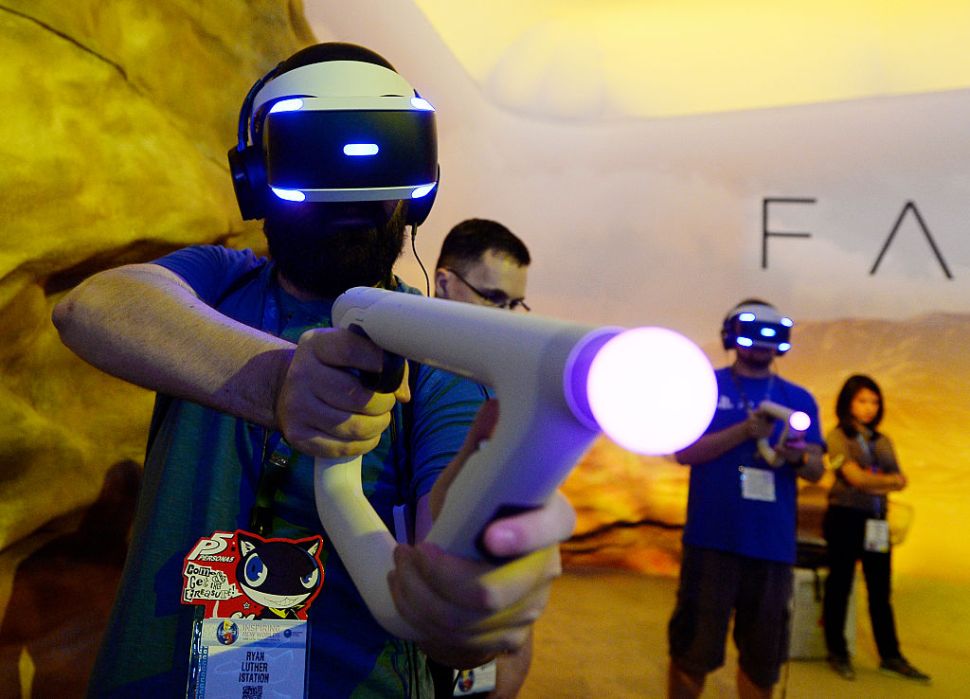