Although it both physically and emotionally pains me to even type this, there’s just no getting past it at this point: Wayward Pines–my beautiful, bonkers, M. Night’s Watch from last summer–is kind of a huge bore in its sophomore season. I even held off on writing about it until its second episode, titled “Blood Harvest.” Blood Harvest! How do you take something called “Blood Harvest” and make it blander than un-buttered bread? If someone was like “Hey, wanna go to this paint drying festival” I’d probably turn that invite down but if it was followed up with “The theme is Blood Harvest” I’d be all “Shit, that’s metal as hell how much are three-day passes?”

Most of the fun of Pines‘ inaugural go-around was how it very, very rarely, if ever, made any logical or narrative sense. Cars just blew up for no reason. Luscious Lyon was always just hiding in bushes eating rum raisin ice cream. There weren’t any crickets anywhere in the entire town. What did that mean? Pretty much nothing, and it was so much fun.

Season two–perhaps due to the change in show-runner–took all that and said “Okay, but allow me to get serious for a moment.” If last season was a roller-coaster this season is the mechanic who tightens all the screws after the theme park closes. Which is a very important job! But I just want to ride the loops, man, not see all the work that holds the loops together.

Mostly, like a paying customer after a matinée showing of The Village, I’m left deeply disappointed. There’s one, vital mystery left inside Wayward Pines that I expected–no, needed- it to dive in to. Now, it appears that particular conundrum-raisin ice cream cone has been left to the wayside in favor of medical drama and vaguely Nazi-ish undertones. It’s a simple one, but the implication are monumental.

Who the hell built this statue?

Let me back up. In last summer’s season finale, “Cycle,” Ben Burke was hilariously conked on the head in an elevator shaft and slipped into a coma. He woke up in Wayward Pines’ hospital three years and four months later to find the town returned to its idylic state, with one major difference; Students from the Wayward Pines Academy (aged 14-18) have taken over the town by force, and run it with a baby-sized yet iron fist. To commemorate the general ideals of the Academy students, a bronze sculpture of Wayward Pines founder David Pilcher was erected in the park, over a plaque reading “Wayward Pines Visionary.”

First of all, that is a huge statue. Considering Ben is roughly the same size, shape, and personality type of your average scarecrow, it’s easy to assume that statue is at least nine feet tall. Do you know the process for building a nine foot tall bronze statue? Well first, you’re going to need to build a nine-foot-tall wax mold. That’s more than 1,000 pounds of wax. The world ended, like, 4000 years ago. Where are you getting all that wax, Wayward Pines Academy?

Then, then, that nine-foot Pilcher-shaped monstrosity is coated in clay, heated to ungodly temperatures to remove the wax residue, and filled with molten metal. The only reason I know this is because of Google, something that no longer exists in Wayward Pines‘ world. Other things I assume the town does not have: 1) 67 gallons of molten, liquefied metal 2) A certified bronze-smith who isn’t going to fall into his own creation like Arnold Schwarzenegger at the end of Terminator 2.

Keep in mind, the residents of Wayward Pines are still keeping out the endless hoards of flesh-eating Aberrations with an electrified chain link fence. This starts to make a lot more sense when you consider hundreds of thousands of dollars worth of precious metal was melted down to decorate the park.

And that’s assuming they even have the material. Even then, we circle back to the same question: Who built the statue? The oldest person in Wayward Pines’ new ruling class is barely old enough to buy an R-rated movie ticket. Do you remember what you were up to in 11th grade? Were you dumping two hot-tubs worth of magma into a mold that you accurately sculpted to look like the second best bad guy in Captain America: The First Avenger? I know it’s a plot-point that Pilcher handpicked essential tradesmen–like surgeons, and cops, and Matt Dillon’s forehead– to come with him into the future. Was “bronze sculptor” on that list? If so, why was “bronze sculptor” on that list?

I’ve…lost a lot of sleep over this. I don’t think there is one, single question in Wayward Pines‘ second season as intriguing as that statue. “Blood Harvest” ended with Ben apparently getting violent eaten by Abberations out in a corn field (ohhhhh). And that did get a reaction out of me. Sadness. Pure sadness, that Ben Burke died not knowing who the hell built that big-ass David Pilcher statue. You may be gone, Ben, but I won’t let this question go. I can’t. 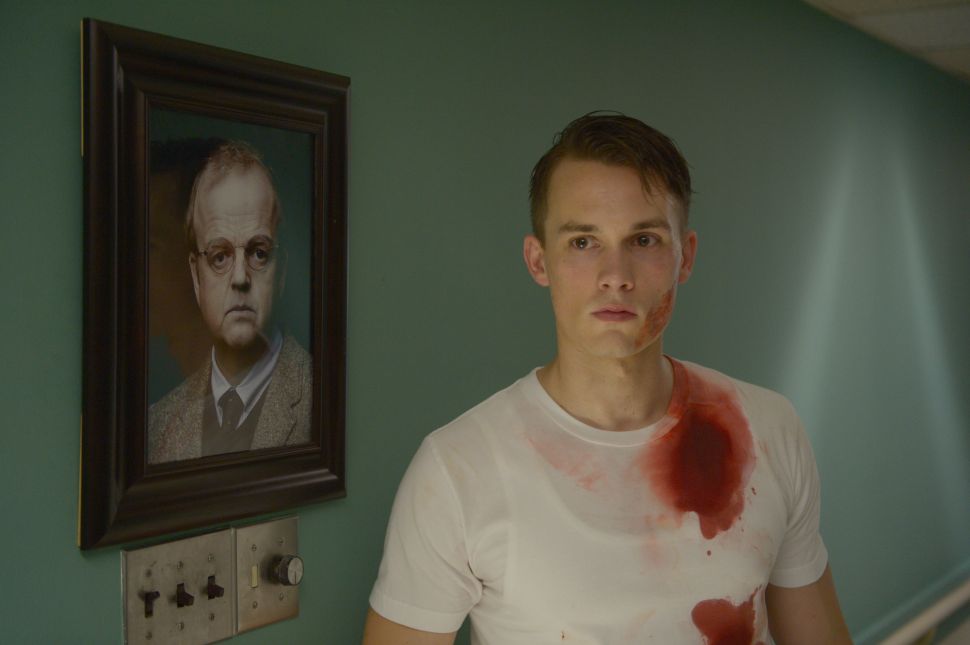