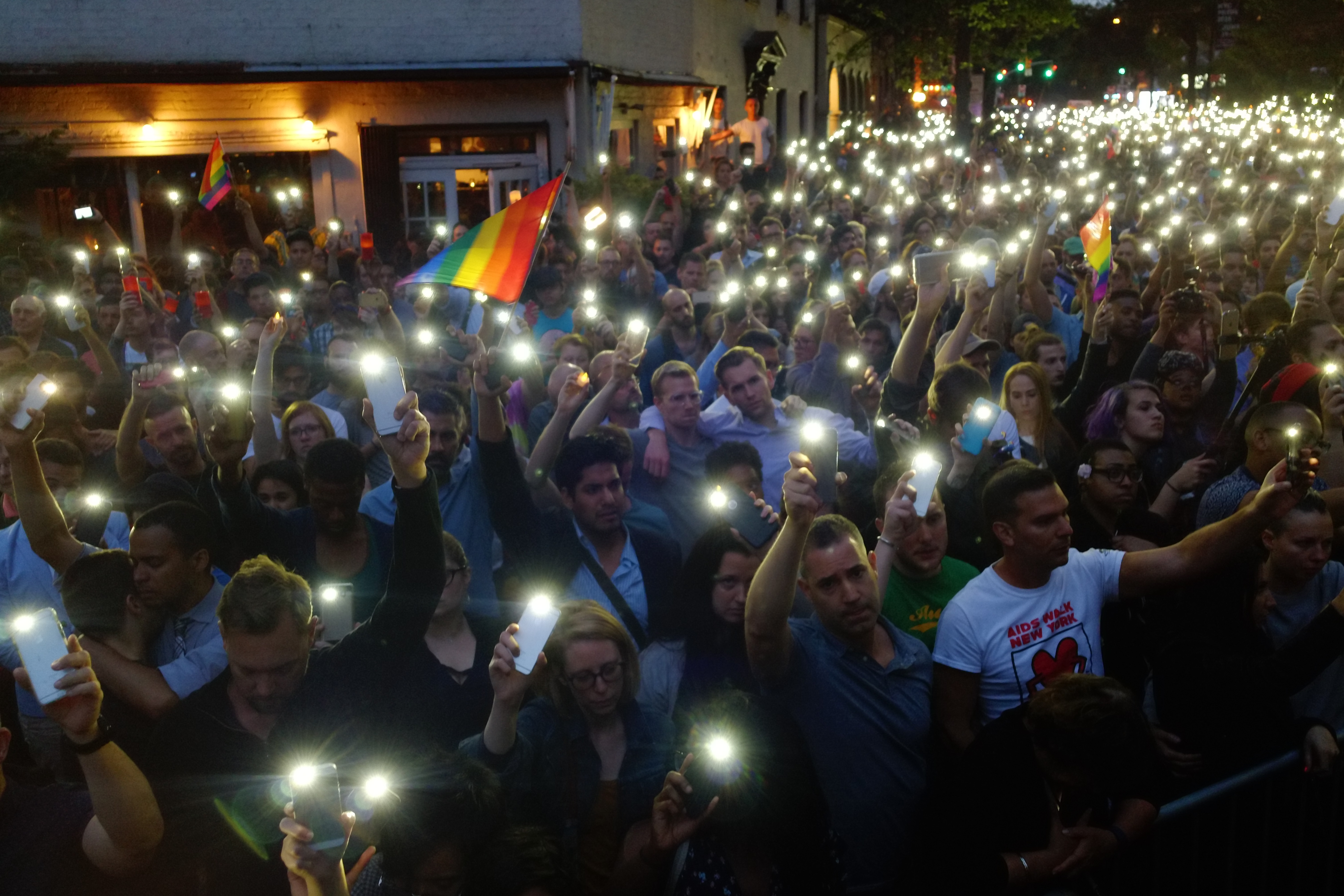 As the names of people killed at the Pulse nightclub were read outside the Stonewall Inn, people hold lights in honor of the victims. (Photo: Jillian Jorgensen for Observer)

People, rainbow flags and shining lights filled the streets around the Stonewall Inn tonight as New Yorkers flocked to the iconic gay bar to honor 49 people who were gunned down in an attack on a club like it in Orlando.

“By coming here tonight, we are sending a message that we are not less than,” Eunic Ortiz, the president of the Stonewall Democratic Club, told a crowd of thousands in the West Village. “We are equal, and our lives will be respected.”

The rally, organized by Ortiz’s club, attracted a slew of elected officials and advocates for LGBT rights and gun control—as well as crowds of people who at times seemed frustrated and tired of hearing from them, interrupting with chants of “Say their names!” as they demanded to hear the names of the dead. At the end of the program, prominent New Yorkers—including several openly gay City Council members—took turns reading the names and ages of those killed in Orlando, as the crowd held up their cell phones and candles to light up the early evening.

In response to the names of each victim, many of whom were Latino, the crowd shouted: “Presente!”

The Saturday night attack on the nightclub, Pulse, ranks as the deadliest mass shooting in the history of the United States. In its wake, many in the crowd said they felt drawn to Stonewall—a place where just over a year ago the LGBT community flocked, overcome by joy and hope, when the Supreme Court declared gay marriage legal nationwide. Tonight, the crowds were overcome by different emotions: shock and sorrow and mourning for people who had, at Pulse, sought out a community like the one that gathers at Stonewall.

“I was crying yesterday, but I was holding it in. I was angry, and got this TV addiction thing of just binging on the coverage, and I couldn’t do it anymore. I went to work and felt all day—like ­­you know that feeling in your throat when you’re about to cry? I felt that all day. I went into my car, and the tears were rolling down my eyes,” Brunilda Vega, 58, a Puerto Rican resident of Harlem told the Observer. “Then I told myself, ‘Go to Stonewall.’ I surrounded myself with my own people, and I felt better. These are all my people, whether they’re gay or straight.”

Vega wasn’t alone in feeling that call to come to Stonewall. Jeremy Martin, 35, of the Lower East Side, said he came to connect to his community—remembering how he’d come out in the neighborhood when he was 15, traveling from New Jersey to get support and resources in the Village.

“Stonewall is a mecca for LGBT people. It’s a place that has so much history with the Stonewall riots. It’s in this space where people come together when good things happen and bad things happen,” Martin said. “I came out here for many rallies good and bad, and it’s just a place where you can come together with the community and share in the idea that we’re going to choose to love each other and not turn down a different route, not feed into the hate and show future generations that we have pride.”

The Pulse shooter, Omar Mateen, had pledged his allegiance to the Islamic State—re-igniting a debate over how to handle home-grown terror threats. But Mateen had also expressed hatred towards gays and lesbians, and according to his ex-wife was an unstable domestic abuser. More recent reports tonight paint an even more complicated picture tonight: he had apparently visited Pulse and used gay dating apps before the attack.

While Mateen was a U.S. citizen born in New York, Republican presidential candidate Donald Trump called for a ban on Muslim immigration to the United States in a speech in response to the attack today, and made a direct appeal to the gay community devastated by the attack. But his appeal didn’t appear to be going over well at Stonewall, where people held signs decrying Islamaphobia and speakers denounced Trump and any attempts to vilify Muslims.

“What happened in Orlando was a hate crime, committed by an American-born male who was an angry, homophobic, wife-abusing wannabe cop, twice interviewed by the FBI,” Leah Gunn Barrett, of New Yorkers Against Gun Violence, said from the stage. “And despite all of that, he was legally able to buy an AR-15 assault rifle.”

Like Barrett, many in the crowd and on stage were focused on calling for gun control, rather than changes in immigration or foreign policy, in response to the massacre. One stark sign read “NRA = Death.” As Gov. Andrew Cuomo and Mayor Bill de Blasio arrived at the vigil, the crowd burst into chants of “What do we want? Gun control! When do we want it? Now!”

Cuomo, like several other officials, was met with some heckling at the start of his remarks. But he seemed to win most of the crowd over with a steady call for gun regulations and a declaration that New York would rally around its LGBT community—pledging to hold the “largest Pride parade in history” later this month.

“We believe in New York that an attack on any of us is an attack on all of us,” Cuomo said. “We tell our enemies: we do not fear you, we pity you. And you have not struck terror into our hearts, you have unified our hearts.”

Mayor Bill de Blasio took the stage to some warm applause—until he was joined by Police Commissioner Bill Bratton, whose presence prompted chants of “End police brutality.” (After de Blasio spoke, Bratton took the podium himself and began his remarks by quoting from the speech Robert F. Kennedy delivered the night Martin Luther King was assassinated—only to be drowned out by boos and chants from the crowd.)

But as de Blasio sought to regain the crowd’s attention during his own remarks, he landed on a target that seemed to unite them.

“We do not accept the notion of any of our leaders sowing hatred and division particularly in the wake of tragedy,” de Blasio said, pausing for a moment before delivering a line that brought big applause. “And that means you, Donald Trump.” 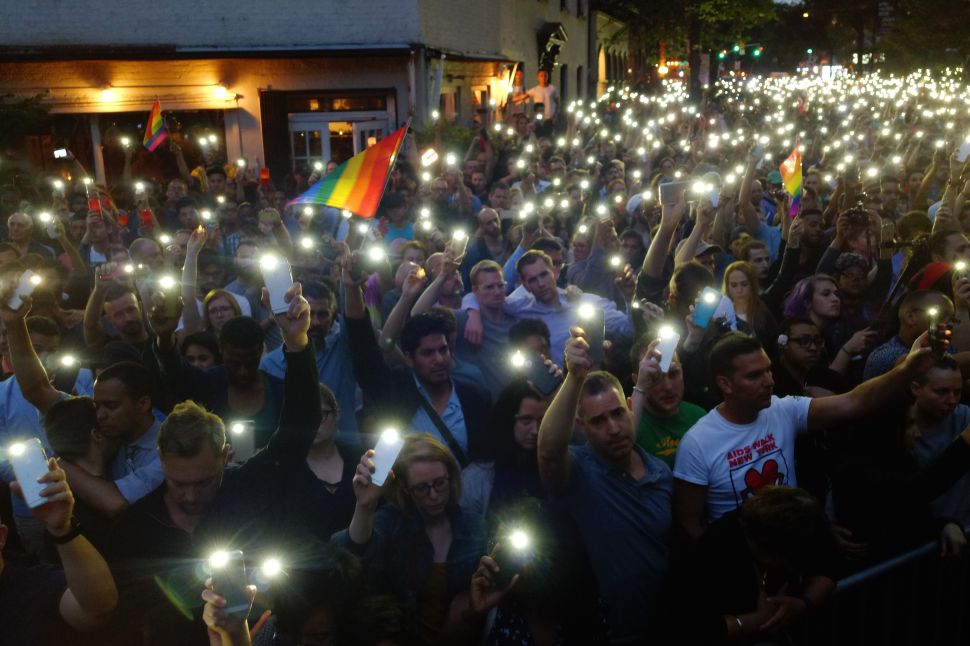