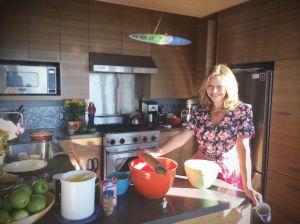 The author in her element. Courtesy of Joyce Maynard

It was going to be a Brooklyn wedding, and instead of cake, the bride wanted to serve pie.

This was where I came in. The bride was my stepdaughter—a label I’m not wild about, because that would make me her stepmother, and more often than not, the connotations there are not so great. So I’ll just say, the bride is the only daughter of my husband Jim, who came into my life (same as I came into hers) less than five years ago. And maybe in part because I had not gotten to be in her life all that long—unlike the daughter I gave birth to, who may have gotten more of me than she bargained on, at times—I wanted to do something for this young woman and her groom on their wedding day to demonstrate my happiness at being part of their family. I wanted to give a gift that came directly from my hands, and if you want to get corny about this, from my heart. A good example: pie.

It’s one thing to make a pie for a person. It’s a little more complicated, making pie for her entire wedding. In the case of my stepdaughter’s event, the guest list was somewhere around 85. Divided into slices (seven per pie, in my book), that worked out to thirteen pies. More, if people wanted seconds. And as with all good pie, they would. 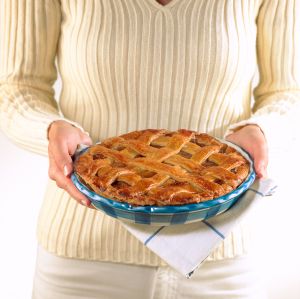 I’m no stranger to the concept of making great pies in significant numbers. Though I make my living as a writer, to some people I am best known for the pies I bake. Google my name, and the word “pie” and you’ll see my online pie video and various discussions I’ve engaged in over the years, concerning shortening, rolling pins and the like. One novel I wrote a few years back features, as a crucial event in the story, a scene in which a central character (an escaped convict on the run) teaches the 13-year-old son of the woman in whose house he’s hiding out how to make a good pie. Open Labor Day to page 164 and you will find a very detailed and workable set of instructions for how to make pie the way I do it.

Though I make my living as a writer, to some people I am best known for the pies I bake. Google my name, and the word “pie” and you’ll see my online pie video and various discussions I’ve engaged in over the years, concerning shortening, rolling pins and the like.

(And I am so particular about this technique of mine that when the novel was made into a movie, I made it a condition of the deal that the pie in the movie not resemble one of those perfect Martha Stewart creations one sees on magazine covers. I wanted the pie in the movie to look like one created by an ordinary person, with all the imperfections that entails. Which is how I came to be flown three thousand miles across the country, on the first day of shooting, to teach Josh Brolin how to make pie like mine. )

Crust is my specialty, and because the art of good crust has less to do with studying the recipe than with handling the dough, I have used my skills on occasion (generally election years) to raise money for my candidate. Over the years (beginning with Bush v Gore, and going all the way through Obama) I have hosted fundraisers for the candidate of my choice at home, where I oversee my guests—that is, those willing to fork over $100 to my candidate; the verb seems particularly apt here—as they create pies of their own, imparting the fool-proof principles of my technique. Over the years, I estimate I’ve opened my kitchen to well over a thousand men and women (most of them Democrats). Every one of whom brought home a fine, flakey pie.

But the bride’s request about the pie had nothing to do with raising money for a good cause. It was about family. And though I make my home, with her father, three thousand miles from Crown Heights—and fourteen pies is a lot—I was so touched that she’d ask me that I didn’t have to think more than a moment before saying yes.

I found my Brooklyn baking spot with the help of my friend Henry, a chef, who said I could use his commercial kitchen. For my team of assistants, I rustled up my daughter Audrey and my book editor, Jennifer—a woman more accustomed to trimming my sentences than the edges of my crust, but she was game. Meanwhile, Jim’s daughter and I conferred about fillings and discussed, but ultimately discarded, the concept of hand pies. We didn’t like the crust-to-filling ratio. End of story.

But larger problems faced us over the months. The bride’s father, my husband, had been battling cancer, and he’d been hit by a bad infection that put him in the hospital. “There’s just no way I’m missing my only daughter’s wedding,” he kept saying, as the days passed and the bacterium kept mutating, and the doctors kept switching up his IV antibiotics. But five days before the wedding, it was clear: Jim could not get on a plane to make the trip.

I would be there. But only for the event itself, with no time for a day of baking.

Of course, the real disappointment for the bride wasn’t missing out on my pie. It was not getting to have her father at her wedding. But it seemed to me more important than ever, given what was going on, that the pies we set out on the table on that big day be not simply O.K. or good, but amazing. If I couldn’t make the wedding couple’s pies myself, I wanted them to come from someplace magical.

This was when I remembered a pair of pie-baking sisters I had briefly encountered, back when the Labor Day movie first came out, who run a pie shop in Brooklyn. They had given me their pie cookbook, and though their methods differed from mine, I had to admit their pies looked extraordinary.

I mentioned this to Jim’s daughter. “Oh, Four and Twenty Blackbirds is our favorite pie anywhere,” she told me. “But we’d never get so many pies this close to the date. You have to place your order weeks in advance.” This was one hot pie shop.

Sometimes I make pies. Sometimes I write. That particular day, it was a letter to the pie-baking sisters with the great Brooklyn pie shop, telling them our story. We had a pie emergency on our hands.

Sometimes I make pies. Sometimes I write. That particular day, it was a letter to the pie-baking sisters with the great Brooklyn pie shop, telling them our story. We had a pie emergency on our hands.

Within hours came the word. The wedding couple should pick out which of the vast and wonderful offerings at their pie shop would they would like to serve at their wedding. The sisters would deliver the pies.

At first the bride was tempted to choose, for her fourteen pies, one of each of the varieties on the Four and Twenty Blackbirds menu of offerings. How could we not sample Salty Honey, Lavender Honey Custard, Bittersweet Chocolate Pecan, Honey Rosemary Shoofly? The groom wanted to narrow in on just a few types of pie. This was the kind of dilemma that could have made for a pre-marital argument. But the two of them worked it out—a fact that bodes well for their future.

In the end, the couple narrowed their selections down to four: Salted Caramel Apple. Chocolate Julep. Lemon Chess. Apple Rose.

The day of the event, I hopped on a plane in the pre-dawn darkness. Made it to Brooklyn in time for the start of the festivities, snapping pictures like crazy for my husband back home. Neither my presence, nor the presence of those pies, made it easy to be celebrating without him, but happiness filled the room as it does when true love is unmistakably in evidence.

This next sentence is not easy to write, but I will do it. The sisters’ pie was better than mine. “Oh, not necessarily better,” my daughter Audrey—a kind person—suggested. “Just different.”

The next day I sent a thank-you note to the sisters at Four and Twenty Blackbirds, to tell them how much everybody loved their pie—which had been not simply a dessert, but an event. Big love deserves great pie, I told them, and those pies had not let us down.

I flew home to my husband, with the knowledge that there were more tough battles ahead. The bride and groom took off on their honeymoon. They will have larger challenges than pie shortage in the years to come, as we well knew. There is no such thing as love without sorrow.

But that day, sweetness surrounded us.

Joyce Maynard’s most recent novel, Under the Influence, was published earlier this year. 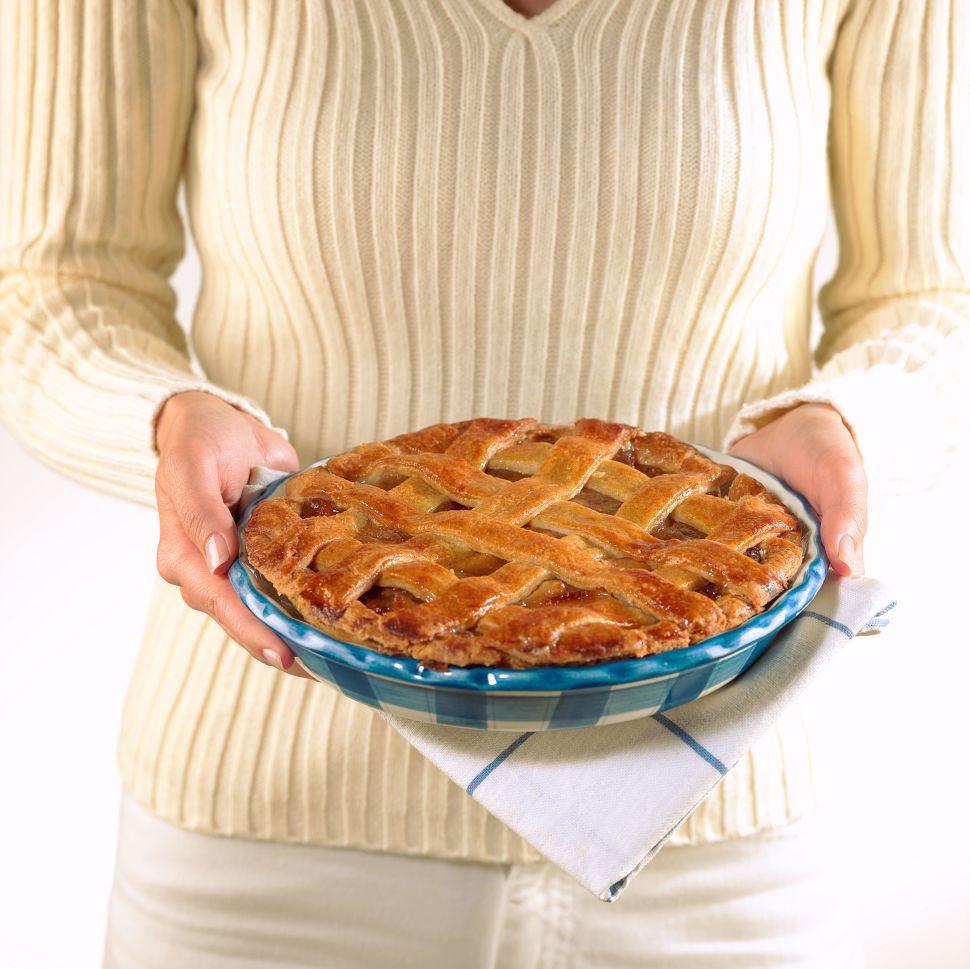