It’s been four years since pop star Whitney Houston’s tragic death in a Los Angeles hotel room, and the time has come for the artist’s estate to “give something of Whitney to the people who loved her and her music,” according to its president Pat Houston, who also happened to be the entertainer’s manager and sister-in-law.

On June 24 and 25, the Whitney Houston Estate will offer over 100 personal items of the late singer’s for sale at Heritage Auctions in Beverly Hills. For a few grand, fans of the songstress can scoop up award statuettes, gold and platinum records, passports and stage costumes.

Among the most personal items to hit the block is Houston’s wedding dress, which she wore in 1992 when she wed singer and New Edition member Bobby Brown. The Marc Bouwer-designed gown is ornately beaded and sequined, and comes with matching sleeves, a hat and veil. Bids for the dress start at $3,500, but the outfit is expected to fetch over $7,000.

Several other pieces designed by Bouwer—the singer’s designer of choice—are included in the sale. A black velvet jump suit made for Houston’s 1991 I’m Your Baby Tonight tour is estimated at $4,000, and a glittery floor-length dress for a 1990 Life Magazine photo shoot is valued at $3,000.

Personal items such as Houston’s purple leather-bound script for the 1995 film Waiting to Exhale can be bought for under $2,000. The book is inscribed with the singer’s handwriting, and valued at $2,000. And then there is a very special pair of Nike Air Jordans, gifted to Houston by non-other than Michael Jordan himself. The size 13 sneakers, which are expected to sell for over $20,000, were supposedly worn by Jordan during game three of the 1990 Pistons-Bulls Eastern Conference Finals. Houston sang the National Anthem to open the game that night.

Items from the Whitney Houston Collection are just a fraction of the several hundred on offer in Heritage’s June 24 and 25 Entertainment and Music Memorabilia Signature auction. While the sale’s leading lots feature some items from Houston’s holdings, such as the Air Jordans and her Emmy Award for the single 1986 Saving All My Love for You, Elvis Presley’s white Knabe grand piano has the biggest price tag—the instrument could bring over $600,000. Prince’s custom-made yellow guitar is the second priciest lot, estimated at $50,000. 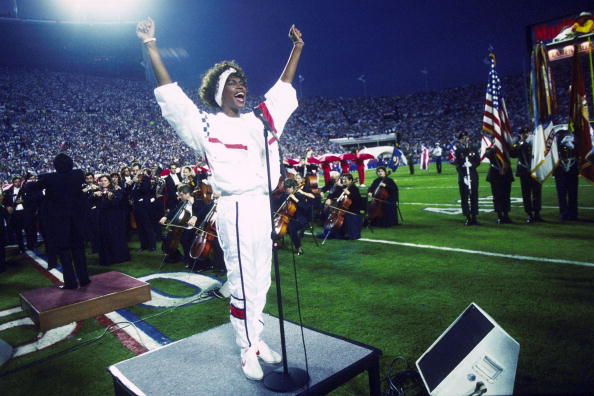