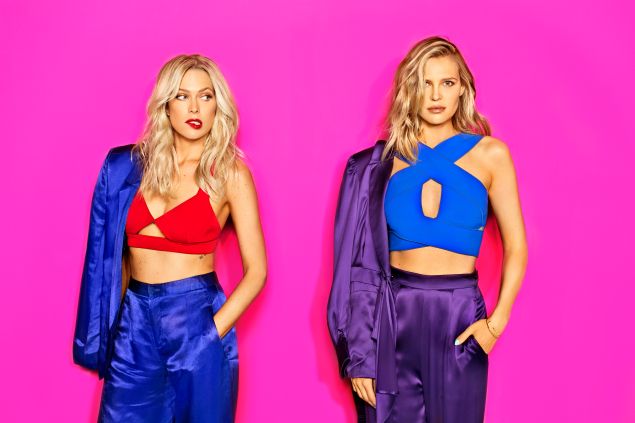 Larry David, Gary Shandling and Sara and Erin Foster? Two people stick out in this group and we’re pretty sure it is the two gorgeous, tall blondes at the end. And yet these sisters who have at one time or another been related (through their parents’ marriages) to the Kardashians, the Jenners, and the Hadids, they have managed to follow in the steps of comedians like David and create a scripted show, posing as a reality show, about famous people whose lives are anything but realistic. We’re talking about Barely Famous which kicks off its second season tonight on VH1 and should be your new summer show.

Sara, an actress (90210) who is married to tennis player Tommy Haas, and Erin, an actress and writer who has dated Harry Styles and Chad Michael Murray, are both Hollywood royalty and had been offered literally a dozen reality show opportunities over the years as their father is legendary music producer David Foster and their close circle of friends includes Kate Hudson, Jessica Alba, Rachel Zoe and Nicole Richie. These women were born for a reality show, but they didn’t want to do it. Instead, they turned the tables and pitched a comedy to VH1 that would be about eccentric (and somewhat delusional) versions of themselves who were starring on a reality show about their glamorous yet ultimately ridiculous lives among the rich and famous. The concept was a little tricky to grasp at first (as any brilliant show is), but eventually, it caught on and the women truly managed to capture the ridiculous side of fame and L.A. culture. One episode in Season one focused on Sara’s desire to get her daughter into a very popular pre-school (appropriately titled Inner Smile). She put up a Louis Vuitton bag to be auctioned off only to be called out for actually donating her sister’s fake one by mistake (though honestly that could happen with anyone trying to buy their way into a private pre-school in New York, as well. It’s brutal out there.) 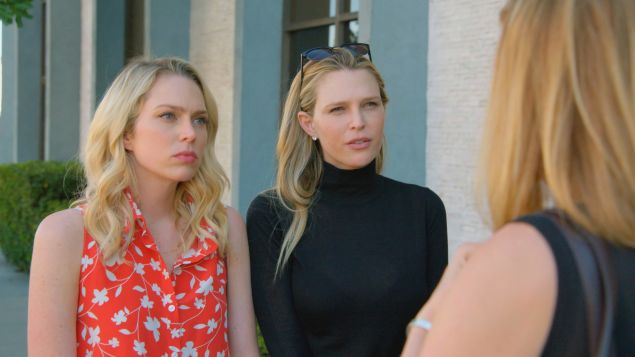 A screenshot from the first episode of ‘Barely Famous’ (Photo: Courtesy VH1).

The quirky but smart show was praised by critics and renewed by the network. But as we all know, a sophomore season can be daunting following a strong freshmen year. “For me Season one was almost an experiment. We didn’t know how it was gonna come out. We were just testing a lot of things. It was a little bit intimidating trying to recreate that [with Season 2] because we didn’t know how we had done it. It just evolved as it went along. There is something magic about being unplanned,” Erin told Observer. And the show has perfectly captured the nuances of L.A. life with that sprinkling of neurosis that David so perfectly always found. Erin is truly a David type just trapped in the body of a tall, gorgeous blond who looks great in cutoffs.

But the new season is quite funny and definitely goes out on a limb, as Erin told us we will see her go on a drinking bender with Alba and get impregnated by either a celebrity (possibly Braff) or a valet, which she then has to figure out. “We really wanted to touch on the important L.A. issues,” said Erin. But they will tackle some more realistic issues like expanding their careers and which celebrity girl squad they should join. And similar to Curb Your Enthusiasm and The Comeback, which the women say are their biggest inspirations for their show, there are plenty of opportunities for improvisation, though both women said there are very clear and tight outlines for each script. 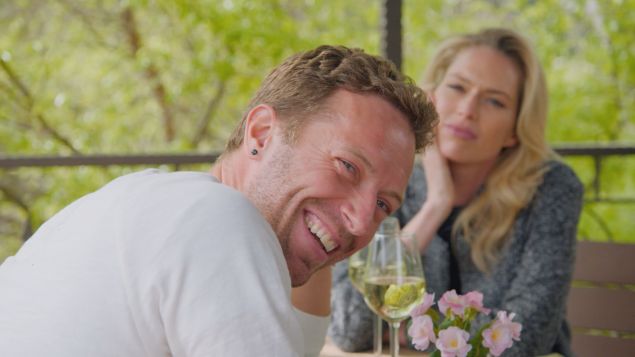 It also doesn’t hurt that the celebrity cameos have doubled in Season two. The women seemed to tap their BFF network a bit for Season one, but this year, everyone was coming to them. Chris Martin, Chelsea Handler, Zach Braff, Kate Upton, Cindy Crawford, Brooke Burke, Dr. Phil, and Joey Fatone will all be appearing this season (as well as Alba and Hudson who also appeared on Season one.) Sara, who only knew Handler peripherally, ran into her at a party and was delightfully surprised to hear she was a fan. “I would never expect her to know of our show, let alone like it!” she said. A few weeks later, Handler was shooting an episode. This in contrast to the show in which both sisters think they are major celebrities yet no one else does. “I can hardly walk down the street in Germany,” Sara said during Season one proudly.

But what really makes the show work is the relationship between these two sisters, even if we are seeing the one between their alter-egos. The show only works because of their underlying relationship and camaraderie. They capture the criticalness, but utter closeness of most sisterly relationships. Even while interviewing the sisters, they spoke over each other, interrupted each other and were each other’s biggest champions. Erin pointed out that Sara is actually a great improviser, but doesn’t trust herself, so she and the other writers and producers have to trick her into ad-libbing. But then a second later they were back at it, making fun of each other. 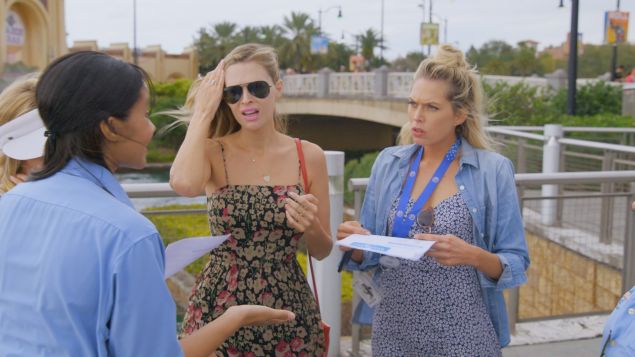 A scene from the second episode (Photo: Courtesy VH1).

As anyone with a sister knows, it is normal to go from defending them to the death to pointing out everything they are doing wrong with their lives within the span of five minutes (heck, I did it three times with my sister before 11 a.m.) As Erin says this season to her big sister: “You’re like the worst, but at the same time you’re like the only sister I have. I mean we have other sisters, but you know what I mean? You’re like my only…” “Pretty one,” Sara finishes. That is the most accurate depiction of a relationship between sisters I have ever seen.

“In any sort of working environment you have to check yourself or hold your tongue because you get fired and that doesn’t apply with sisters. There’s no filter here and that’s rare. We really push each other’s buttons as actors and that’s fine but as producers and editors and everything else we have to find that happy medium, but we usually find it,” Sara told Observer. “But, no, we haven’t spoken since the last day of production.” See, she is quite good at improvising. Erin was right.

If you’re looking for a laugh, some beautiful people and a little sisterly love then this is the show for you. Watch the trailer for Season 2 below. 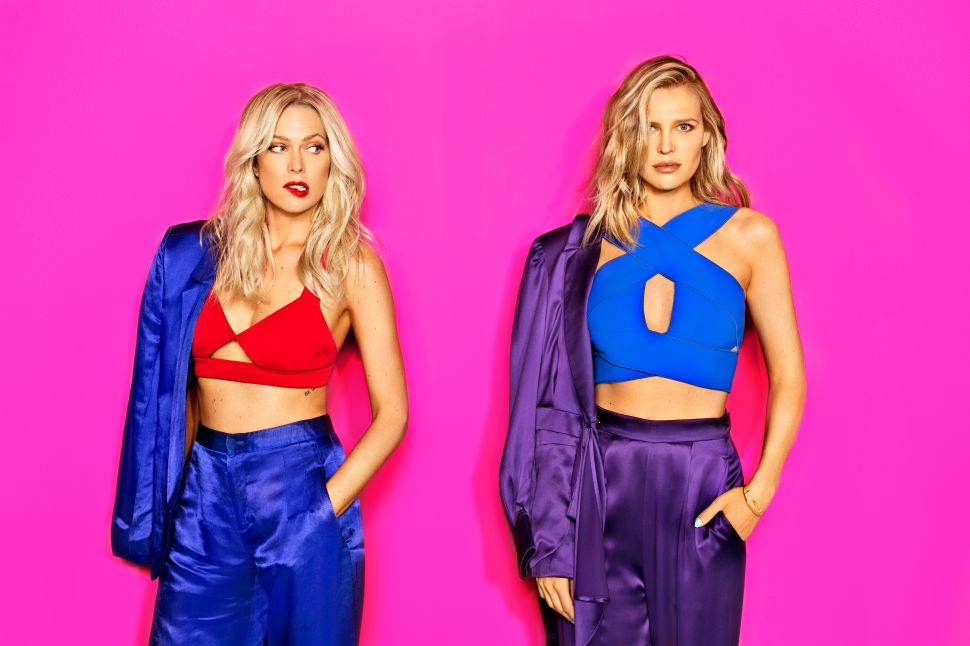