Soon we’ll know if Bernie Sanders has kept his promise to stay in the race until the bitter end or whether his thinking has changed. Either way, his decision to continue his campaign, long after his mathematical road to victory has narrowed to somewhere between improbable and impossible, is a puzzler—at least to many in the political chattering class.

As a former professional poker player, I approach decision-making from a different perspective. Is Bernie looking at this the way a poker player might? One can easily imagine his critics using poker clichés to chide his stubbornness: “Know when to hold’ em, know when to fold’ em, Bern” or “Never get married to a lousy hand.” But do such axioms actually apply?

For today’s players, advanced strategy is predicated on extracting maximum value from one’s holdings, no matter the strength, using position and leverage to one’s advantage. By factoring into one’s thinking concepts such as “hand ranges” and “fold equity,” the modern player applies game theory in a way that deviates from old-school strategy (for the uninitiated, fold equity is the added worth of a bet or raise when you factor in the number of times you can force a superior hand to fold). A second-best hand played aggressively can prove profitable when you add to its natural odds of winning the possibility that a better hand will fold.

So let’s play Bernie’s cards. His holdings are weaker than Hillary’s; he trails in delegates, superdelegates and the popular vote. His path to the nomination at this point is narrower than a militiaman’s view on gun laws. If he refuses to drop out of the race, and it results in a contested convention, what is his expected net gain versus what he might lose?

Conventional wisdom would have dictated him suspending his campaign weeks, if not months, ago. If he did so, he would have been commended by Democratic elites for showing his loyalty and demonstrating an understanding that unifying against the GOP opposition was more important than furthering his personal ambitions. But Bernie is an unusual candidate. His personal ambitions seem secondary to his sense of mission. If we don’t conflate the two, then we might conclude that the best way for him to further his mission is by keeping his candidacy alive, which enables him to continue galvanizing support for his views.

By staying in the race, he is forcing Hillary to be more accommodating to them and to him. Ironically, her best chance of winning in November probably hinges on her willingness to embrace him more fully.

Has this strategy succeeded? By ignoring calls to drop out, he’s increased his leverage in shaping the eventual Democratic platform and having a say in policy. Additionally, he’s kept alive his slim hopes for a miraculous come-from-behind victory. Not only that but he’s well positioned to step in and save the day if, between now and the end of July, some new Hillary bombshell drops or an old scandal blows up. That’s no small thing, because if that were to actually happen and Bernie had already dropped out, who knows what kind of mess would develop come convention time? If Bernie’s still in, on the other hand, the nomination would likely be handed to him, and rightly so.

What are the downsides? For one thing, continued contentiousness between he and Hillary could so enflame his supporters that come Election Day the Berners either stay home or vote against her in protest—and as a result elect Donald Trump as our next president. At least that’s what Bernie’s critics warn.

The truth is, most of Bernie’s supporters were already hostile to the establishment, which Clinton represents. Is he now further alienating them from her? Possibly. On the other hand, by refusing to clear the field for her, Bernie may actually be doing her a favor. An earlier withdrawal might have mistakenly empowered her to think that she could pivot to the center with little regard for the interests of his followers. By staying in the race, he is forcing her to be more accommodating to them and to him. Ironically, her best chance of winning in November probably hinges on her willingness to embrace him more fully.

While many progressives may not approve of Bernie’s tactics, from a poker perspective he has played a tricky hand well. By refusing to acquiesce, he has adopted a strategy that should ultimately help him derive maximum value from what is a second-best hand. And that’s a good thing not just for him and his flock, but for all Democrats.

Peter Alson is the author of Confessions of an Ivy League Bookie and co-author of One of a Kind, a biography of the poker champion Stuey Ungar. 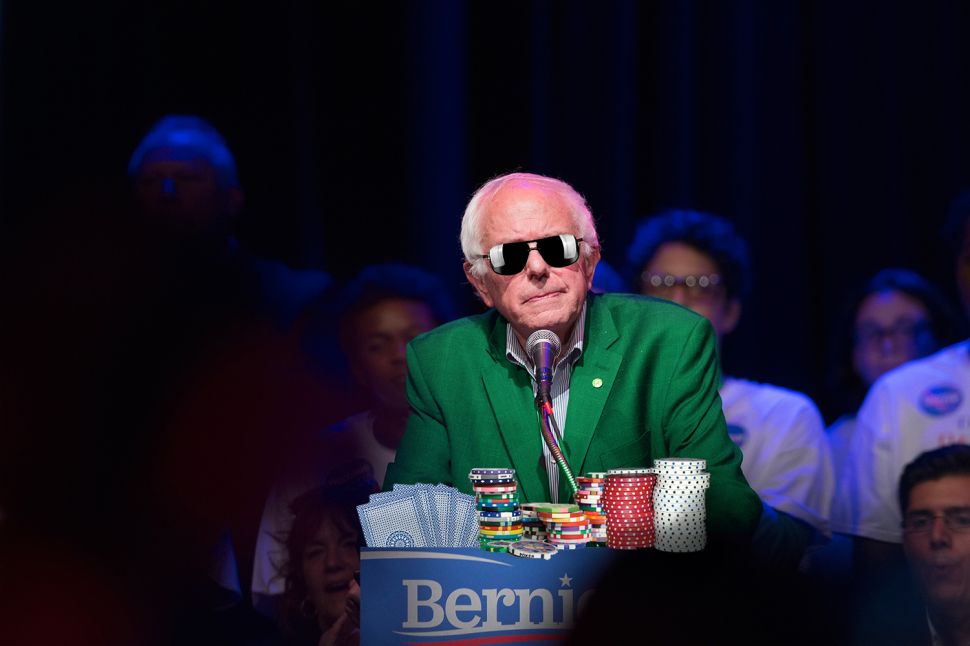