On a mild evening in April, Hillary Clinton walked up to the podium at the Sheraton New York Time Square’s Metropolitan ballroom. She had just been crowned the victor of New York’s Democratic primary, a contest whose victory didn’t guarantee the ultimate Democratic Presidential nomination, but for Clinton, this win was personal. This was the state where she won her first political office, where she served as Senator for eight years. It was the state that allowed her to pave the way for her political ambitions, ambitions that led her to be in this room, to stand at this podium; the winner of yet another Democratic primary.

Looking visibly relieved, a smile nearly splitting her face in two, Clinton thanked her supporters and talked about how, as President, she would fight for economic equality. She looked confident, her short hair parted at the side and a micro-checked red and white and black jacket adorning her shoulders. What wasn’t known at the time was that the jacket she was wearing – an Armani Spring 2016 design– retails for $12,495. And so the speech passed without incident.

That is, until this past Monday, when Leah Bourne at the NYPost broke the news about the cost of Mrs. Clinton’s jacket. Both the media and the Twitter-verse reacted almost immediately. Most mocked Clinton’s choice, underlining the hypocrisy of wearing something so prohibitively expensive while speaking about the dangers of income inequality.

But while Clinton spoke about income inequality, that wasn’t the purpose of her speech. Inequality made up a portion of a 20-minute self-congratulatory speech. In fact, the context actually justifies her outfit choice. On a night when she came out to celebrate her win, she wore a sophisticated, understated jacket; a jacket that conferred a sense of authority, perhaps even a Presidential tone (specifically within the white and red checks). It wasn’t a night for being a regular American, but a night for presenting herself as a leader.

Sure, it seems contradictory for her to wear a jacket that costs as much as a minimum wage worker makes in a year, while speaking about income inequality. It is certainly ironic, especially with the ability to put an exact price-tag to her faux pas. But, just a couple of months earlier, Barack Obama, during his State of the Union address in January, did the same thing. He wore an expensive, well-tailored suit made of fine Italian wool that costs thousands of dollars while dedicating the main portion of his speech to income inequality. The difference? Obama is a man. And men in politics are rarely derided for spending money on clothes.

But in truth, it’s not that simple. The politics behind political dress is quite complex, with a heaping dose of sexism and some Enlightenment-era ideals thrown in for good measure.

In America, the common thinking is that to be involved in fashion is to be a slave to hierarchy, to superficiality; an anathema for those who believe in democracy. Fashion moves too fast, it’s too focused on adornment and looking better than one’s peers. This disregard for the ever-changing mores of fashion is what cultural theorist J.C. Flügel termed, “The Great Masculine Renunciation,” in his essay under the same name, where a man in a post-French Revolution world, “abandoned his claim to be considered beautiful.” Fashion for the modern man was about, “being ‘correctly’ attired, not of being elegantly or elaborately attired.” Flügel believed that such a change was democratic. That a uniformity of dress could abolish, “those distinctions which had formerly divided the wealthy from the poor.”

This is the core principle that surrounds the importance of the dark, drab suit: it represents democracy, an affinity for all people across the socio-political spectrum. And it’s why in an increasingly casually dressed world, politicians still abide by this strict dress code. The suit is so important to politics that a male politician making a public appearance without a tie is enough to spark political and fashion comment.

But there is an important psychological reason for politicians to abide by this dress code. Daniel Leonhard Purdy, in the introduction to his book, The Rise of Fashion, a compilation of the writings of various cultural, sociological and fashion theorists, wrote:

The dark clothes brought on by the “Great Masculine Renunciation” did not immunize men from scrutiny; rather, they intensified the moral and psychological observation respectable society made of its male members… The intention behind examining male dress was to discover the unique psychological traits hidden within an individual’s facial features and bodily gestures. Dark clothes neutralized any potential distractions to the eye, thereby focusing observation ever more closely on such details as the curve of the eyebrow, the shape of the nose, a twitch in the lips while speaking. These features were said to be the true aim of physiognomy – the subtle and dubious art of detecting character from appearance.

A proper suit enables voters to focus on the candidate and his policies. It’s why Donald Trump, with his $7,000 Brioni suits, can still be seen as a “man of the people,” despite the fact that he’s clearly a member of the 1 percent. It’s why Obama, who has a preference for suit jackets made of fine Italian wool from made-to-measure tailor Martin Greenfield (whose suits run upward of $2,000), can make speeches about inequality without comment on his sartorial choices.

But for female candidates, whose clothing has a wider range and is more individualized, it can be difficult to find clothes that don’t catch the eye of the voting public in a negative way.

When Hillary Clinton began her political journey as a New York senator, she began wearing a multitude of pantsuits, in a rainbow of coordinating colors. She was trying to shed off her image as the former First Lady, where she was known for her dowdy pastel skirt-suits. Compared to the deferential image her former wardrobe gave her, this new one packed a visual punch. It ascribed a sense of fearlessness and power, and it allowed people to see her as more than just the wife of a politician – she was the politician.

But despite its adherence to the silhouette of the male suit, the bright colors were too garish for a potential Presidential candidate. And so, during her Presidential campaign in 2008, her wardrobe was a distraction from her competency. Even though her experience far exceeded her competition – the community organizer Barack Obama – his bland, dark suits made him seem far more competent. Next to his “serious” suits, her bright pantsuits seemed almost childish in comparison.

For this year’s Presidential campaign, Clinton has upped her game. According to the NYPost, Clinton has hired a team of image experts, including former Michelle Obama staffer, Kristina Schake, to make her “more relatable.” This style overhaul may have cost well into the six-figures, but because it’s more modern, more functional, less ostentatious – this “excessive” spending has actually gone under the radar, much like the inordinate spending invested in a male politician’s wardrobe.

As the NYPost concludes, “the campaign will have succeeded from a style standpoint if voters focus less on what Clinton is wearing than they have in the past.” This strategy has worked: it took two months for the price tag of her Armani jacket to come to light. Compare this with the furor over Sarah Palin’s flashy designer wardrobe. Before, she was as dowdy as Hillary Clinton’s First Lady days, the poster-child for the everywoman soccer mom. But once the RNC’s image experts got ahold of her, she began wearing fitted, bold skirt-suits with designer names like Valentino, Elie Tahari, Escada and St. John on the label. And she was, at least in the liberal media, widely denounced for her elitist choices.

A President needs to be relatable, but he or she also needs to be Presidential. To be Presidential requires a large wardrobe budget to accommodate the clothes necessary to look the part. It’s part of the economics of politics. The leader of the free world shouldn’t shop at Walmart in the name of “relate-ability.” To single out Hillary’s expensive clothes while ignoring President Obama’s is sexist and hypocritical. Deriding Hillary for her fashion choice but not Obama’s isn’t simply mocking her disconnect from the poor; it’s deriding her choice to rise above objectification to pursue the most powerful political office in America. 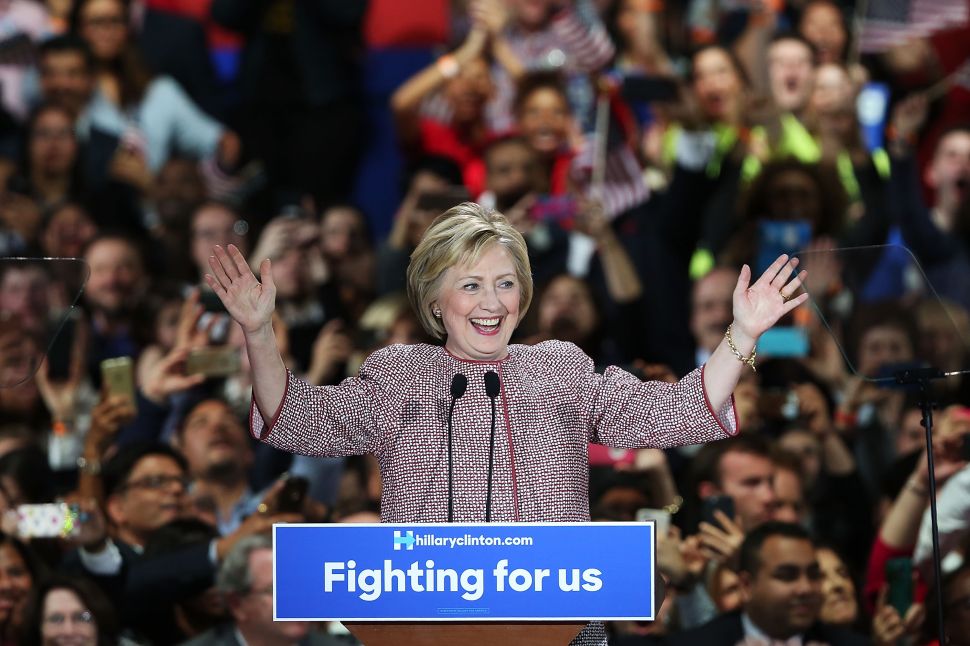