As a resident of Silicon Valley, I am deeply embarrassed to admit this, but here I go: I am not dazzled by Elon Musk.

I know how much he’s accomplished. Starting a new car company from scratch was an enormous undertaking, and the Tesla—the official pace car of Palo Alto—is a signal achievement that making electric cars, for the first time, is cool.

He puts rockets into space through his company SpaceX, theorizes about revolutionary means of high-speed transportation and in his spare time thinks deep thoughts about the nature of “base reality.” (We’re probably all just characters in some elaborate simulation.)

In short order, he’s become the Valley’s anointed successor to the late Steve Jobs. Unless, of course, you’re one of those who think he’s actually Jobs, Wernher von Braun, Howard Hughes, Henry Ford and Bill Gates—all rolled up into one.

But watching Musk in action, it’s hard to shake the impression that he believes in his own exceptionalism a little too much: that when you’re as smart and as rich and as powerful as he is, well, the normal rules just don’t apply.

Maybe that’s why there was such a widespread allergic reaction, at least outside the Valley, to last week’s announcement of the proposed deal for Tesla (CEO: Elon Musk) to acquire SolarCity (Chairman: Elon Musk; CEO: Elon Musk’s cousin), many of whose bonds, by the way, are held by SpaceX (CEO: Elon Musk).

The proposed deal is accompanied by lots of Valley-speak stuff about synergies—your solar panels charging the batteries that power your home that powers the charger that powers the Tesla in your garage. But all the visionary rhetoric in the world can’t disguise that the deal creates financial conflicts of interest on a grand scale.

Musk and his family are proposing to exchange their shares in financially pressed SolarCity for a bigger stake in also financially pressed—but considerably higher-flying—Tesla. Meanwhile, the boards of the companies, which are supposed to safeguard the interests of all investors, are a horror of interconnecting family and business relationships. (This Bloomberg chart vividly illustrates the tangle of ties.)

Certainly Wall Street seems a good deal less impressed than the Valley. While the shares of acquiring companies often decline, Tesla’s fell off a cliff, plunging more than 10 percent when the deal was announced.

Short-seller supreme Jim Chanos, the guy who called bullshit on Enron, calls the deal “brazen” and “corporate governance at its worst.” Chanos has been shorting shares of both Tesla and SolarCity, meaning he makes money from seeing Tesla’s shares fall. But just because he has a financial interest in being right doesn’t make him wrong. And he’s far from alone in attacking the deal.

Marketwatch columnist Philip Van Doorn warned that other existing Tesla investors are facing “epic dilution” of their holdings. Fortune rounded up comment and advice from a number of Wall Street houses, including Oppenheimer (“move to the sidelines”), Deutsche Bank (Tesla buyers “are generally not looking for an end-to-end energy solution”) and Barclays (the deal would be “a lean mean cash burning machine.”)

It’ll be interesting to see how Musk handles the criticism.

In the past, he’s displayed a remarkably thin skin, down to canceling venture capitalist Stewart Alsop’s order for the long-delayed Tesla Model X after Alsop complained about the company in a blog post.

When New York Times reporter John Broder took a disastrous Tesla test drive through a Northeast winter in 2013, Musk—selectively citing data that Tesla had secretly logged from the car without Broder’s knowledge—labeled his story “fake” and claimed that the reporter “worked very hard to force our car to stop running.”

Just last week, Musk responded to a post raising a safety concern from auto blogger and longtime Tesla critic Edward Niedermeyer by suggesting that he might “have something financial to gain by negatively affecting Tesla’s stock price.”

That isn’t the kind of allegation you’d expect a CEO to hurl without providing some evidence to back it up. If Tesla has any such evidence, it didn’t make it public; Niedermeyer for his part tweeted back that “I don’t play the market long or short or professionally advise anyone who does.”

Steve Jobs, we all know, wasn’t known for suffering critics either. On the other hand, he revolutionized computing—three times—and built the world’s most valuable company. Elon Musk made a lot of money from PayPal and parlayed it into an empire of companies that have made big bets with, so far, very modest returns. Not quite the same thing.

One thing he and Jobs do have in common, though: the fabled “reality distortion field.” How else to explain the Tesla Model 3? That’s the as-yet-unbuilt $35,000 wondercar Musk is promising for late next year that’s already drawn more than 400,000 preorders, sight unseen, each accompanied by a $1,000 deposit.

Having the charisma, and chutzpah, to obtain a $400 million interest-free loan via what is essentially the world’s largest Kickstarter project? Now that’s dazzling. 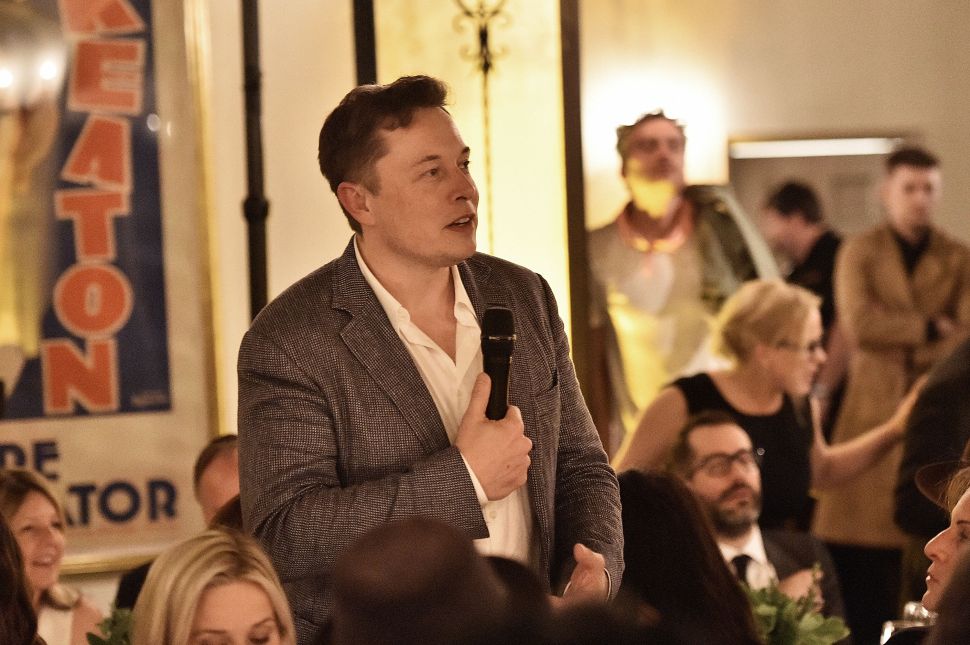