The U.S. Senate last week reached a compromise to require food manufacturers to label foods that contain genetically modified (GM) ingredients, a bill that would preempt state-level laws. The deal comes only one week before Vermont’s law to require GM food labeling will go into effect. If the Senate compromise bill is voted on and passed by a supermajority and signed into law by President Obama, Vermont’s law will be superseded.

The Vermont law stipulates a positive declaration – that is, a label must indicate there are some ingredients are genetically modified organisms (GMOs). The Senate proposal, which backers said is meant to avoid a patchwork of state laws, gives food manufacturers a number of options for how to disclose which products have GM ingredients. Companies could place text on labels, offer a Quick Response (QR) code that would be read with a smartphone or provide a phone number or website with more information. Organic products can be labeled “non-GMO.”

Although the Vermont law and the Senate bill bring the question of labeling to the forefront, the debate over GM food and consumer education has been percolating for some 25 years.

I have studied the social science research about whether and how GM foods should be labeled. In my view, the proposed federal legislation, while consistent across the country, makes it very difficult for consumers to obtain the information they want to know – namely, whether a product has been produced using GM technology or ingredients.

In a 2013 study, Arizona State University professors Gary Marchant and Guy Cardineu identified five issues that are important to the decision of whether or not to label:

They concluded: “While the case for GM labeling seems compelling on first appearance, a closer examination of the scientific, legal, economic and policy arguments and evidence demonstrates that compulsory GM labeling is unwarranted, unnecessary and being manipulated by a cynical and self-serving campaign funded and organized by the organic food industry.”

But I have examined the current state of evidence and have come to the opposite conclusion, as have American courts and several major corporations.

For starters, for at least 15 years, research surveys have found that consumers desire labeling. This has been indicated by Consumer Reports, my own research and many others. Public opinion is on the side of labeling.

Labels play a significant role in facilitating consumer choice in the case of credence goods. These are goods for that consumers cannot determine, through search nor experience, whether a product contains an attribute or quality they prefer, such as the use of GM technology. Labels convey to consumers a desired or undesired attribute.

On the question of legality of labeling requirements, it is worth noting that legal arguments against labeling have failed. Challenged by the Grocery Manufacturer’s Association of America and several other trade groups, the Vermont law was upheld in April 2015. And, while bill HR 1599 passed the U.S. House of Representatives in July of 2015, which would have prohibited states from promulgating their own labeling laws, it failed to pass the U.S Senate in March 2016.

Also, there is no published evidence that GM labels will increase the cost of food. Reports, funded by industry, advocacy and consumer groups have estimated cost ranges between zero and US$500 per year for a family of four.

But the Campbell’s company has publicly stated the cost of labeling is negligible. If there are costs, they will not be passed on to consumers. Company spokesman Tom Hushen said, “To be clear, there will be no price increase as a result of Vermont or national GMO labeling for Campbell products.”

That leaves only Marchant and Cardineu’s fifth point: the risks and benefits of GM foods. The National Academies of Sciences, Engineering and Medicine earlier this year released an exhaustive report on GM foods and found there is no evidence of health risks from genetically modified ingredients.

But pro-GM labeling advocates have not used the GM safety issue in their arguments. Instead, they focus on consumers’ right to know what is in their food and how it is produced.

Several major corporations, which have previously spent millions of dollars to defeat mandatory GM labels, have indicated they will label their products or have already. Campbell’s, General Mills, Kellogg’s, Mars and ConAgra had said they would label their products nationwide in order to be in compliance with Vermont’s anticipated law. PepsiCo and Frito Lay have quietly begun to label already without public fanfare.

Campbell’s President and CEO Denise Morrison said in a statement, “Our decision (to label) was guided by our Purpose; rooted in our consumer-first mindset; and driven by our commitment to transparency – to be open and honest about our food. I truly believe it is the right thing to do for consumers and for our business.”

However, the Senate proposal, if it comes into law, does not make it easy for consumers to actually find out whether a product has GM contents at the supermarket.

One food manufacturing company may choose a QR code, another a label, another a symbol and another a toll-free number. If consumers do not see a disclosure using words, as the Vermont law requires, they look for a symbol. If they don’t see a symbol, they scan the product with a smartphone or call a telephone number. If that doesn’t provide information, they go to a website. For a consumer purchasing multiple products, this will be a cumbersome process. While it has been said that Vermont’s law, in isolation, may cause chaos for industry, as proposed, the compromise bill will cause chaos for consumers seeking more transparency in the food system.

In the months ahead, we will see whether the Senate bill is turned into law and how food makers choose to comply with any disclosure requirements. But given the strong consumer support for labeling, it is unlikely that the debate over GM food labeling will die down.

Jane Kolodinsky is a Professor and Chair Community Development and Applied Economics at the University of Vermont. This article was originally published on The Conversation. Read the original article. 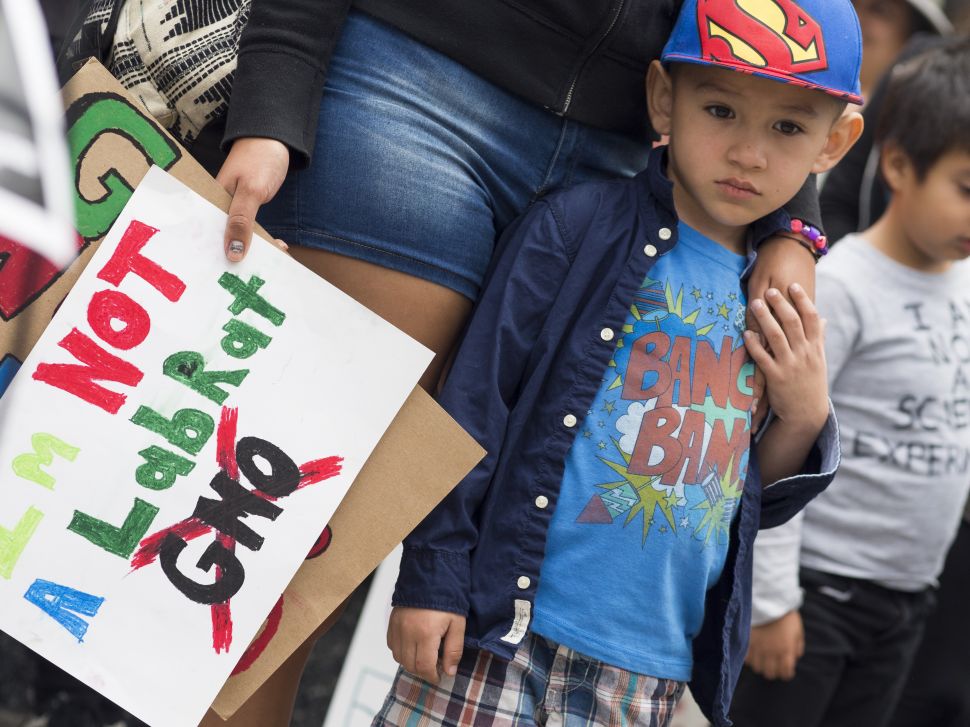