This isn’t another article about the lenient sentence in the Stanford rape case. This is about what happened next.

Earlier this month, a California judge sentenced ex-Stanford University student Brock Turner after a jury convicted him of sexually assaulting a woman behind a dumpster at a fraternity party. Turner—a blue-eyed, baby-faced, all-American-looking swimmer—was found guilty of three felonies, including assault with intent to commit rape and penetration with a foreign object of an intoxicated and unconscious person. Although the prosecutor requested a six-year prison term, the judge—a white, former Stanford athlete like Turner—disregarded the words “years” and “prison” and sentenced him to a mere six months in county jail. With good behavior, Turner might be released before the soy milk in my fridge goes bad.

Cue the angry mob with pitchforks and torches who set the Internet ablaze.

In the weeks that followed I listened to the fist-pounding rage emerging from the masses. I viewed the case not just as an attorney, but as a woman with a troubling story in my own past. Yet, as I struggled to reconcile those two viewpoints and find my relative place on the scale of outrage, I became unable to focus on the issues everyone was screaming about. I was too distracted by the screams themselves. The beautiful, hopeful, unprecedented screams.

To be sure, there was plenty for people to feel enraged about. A 22-year-old woman went to a party with her sister and awoke in a hospital with pine needles in her vagina. Two grad students on bicycles reported that they found her unconscious and exposed next to a dumpster while Turner thrust against her half-naked body then tried to run away. After 16 months and three felony convictions, Turner appeared to remain in denial, writing, “I wish I never was good at swimming or had the opportunity to attend Stanford, so maybe the newspapers wouldn’t want to write stories about me,” as though that’s why we write about him, not because 12 jurors believed he intended to rape an unconscious woman.

Although some believe this was an incredible injustice, I believe it was incredible progress.

Turner’s father expressed disappointment that his son doesn’t enjoy big ribeye steaks anymore, ever since his “20 minutes of action.” Turner’s friend Leslie Rasmussen, a musician who submitted a character reference on his behalf, seemed troubled that he would be punished for his felonies even though the victim “doesn’t remember anything but the amount she drank,” and wondered when we will “stop worrying about being politically correct every second of the day and see that rape on campuses isn’t always because people are rapists.”

Then, Turner’s judge handed him a sentence that would have been appropriate had he robbed the woman of her bicycle, rather than her dignity, her privacy, and her ability to control who and what enters her body. Finally, the judge justified the sentence by saying, “I take him at his word that, subjectively, that’s his version of events,” even though “[t]he jury, obviously, found it not to be the sequence of events.” Obviously.

But even more startling than the facts and findings driving all the rage was the sound it made when you put it all together—an orchestra whose song is vastly more beautiful than any one instrument alone.

I heard the thunderous sound of 1.2 million fists pounding in unison, demanding in a change.org petition that the judge be removed from the bench. I heard the collective sob of countless people as the woman’s 12-page victim impact statement went viral, a piece of writing so powerful and eloquent the words still run through my head like the lyrics to a song. I heard venom spewed at Rasmussen, whose band was dropped from five venues in Brooklyn, one of which stated, “[w]e do not support victim blaming or rape apologists of any kind.” Instead of blaming the victim, we united in protest as the court file spread through the Internet, and it wasn’t just feminists, or rape victims, or women who rallied behind her. The nation heard this woman scream into the night, and felt compelled to scream with her.

In case you haven’t been paying attention, this is not how these stories usually end.

Though the facts of this case were bad, they were not beyond the reach of traditional victim blaming, the antiquated but ever-present mindset that boys will be boys, women were asking for it, and What did you think was going to happen?

This victim, for example, drank four shots of whiskey, two shots of vodka, then beer in roughly two hours. For a period of time she blacked out, which means she still functioned but remembered nothing. Then, with an estimated blood alcohol content roughly three times the legal limit, she lost consciousness next to (or within dragging distance of?) a dumpster. In the minds of some, like Rasmussen, whatever happens after that might just be “a huge misunderstanding,” just “idiot boys and girls” getting “out of hand.”

And let’s not forget the victim’s “black, skin tight dress,” so described in the police report. Lest you think that is an outdated stereotype that has no place in a modern-day courtroom, I refer you to the prosecutor’s motion to “exclude any reference to [the] victim’s manner of dress,” filed to ensure that the defense was prohibited “from suggesting that the victim’s manner of dress is indicative of consent.” Just in case anyone believed that dress = yes.

The prosecution also moved to exclude evidence of the victim’s sexual history, another common victim-blaming tactic, to protect her from “harassment of the type that has traditionally plagued complaining witnesses in sexual assault cases.”

And of course, despite the eye-witnesses, Turner maintained she was a conscious, willing participant. He even told the police that she seemed to enjoy it.

Despite the egregiousness of this case, the woman, in fact, made a pretty good candidate for victim-blaming. In her statement to the court she recalled how she “was pummeled with narrowed, pointed questions that dissected my personal life, love life, past life… I was assaulted with questions designed to attack me, to say see, her facts don’t line up, she’s out of her mind, she’s practically an alcoholic, she probably wanted to hook up, he’s like an athlete right, they were both drunk, whatever.” She recalled how Turner’s attorney “attempt[ed] to paint a picture of me, the face of girls gone wild, as if somehow that would make it so that I had this coming for me.” And even her friend described how the victim was portrayed “as a promiscuous drunk who somehow baited or deserved being nearly raped in public in the dirt.”

All that happened after the prosecution won both those motions, and in the face of two witnesses who say they saw Turner on top of her lifeless-looking body, then chased him while he ran.

How do victims without good samaritan eye-witnesses stand a chance?

Until now, they didn’t. Reports of sexual assaults are notoriously low, an even lower number are prosecuted, and when they are the woman is often revictimized by the defense attorney, by the media, by anyone with a Twitter handle who deems themselves an expert on the facts or the law.

That was the world I lived in 21 years ago, and the world we still lived in until a June day in 2016 when together we said, Enough. When the voices of the victim-blamers were drowned out by the sounds of the nation eviscerating them, insisting she deserved better, and he deserved more than he got.

In her statement, the victim wrote, “I had to fight for an entire year to make it clear that there was something wrong with this situation,” but in the end, she did it. Though there is much about this trial that people feel incensed about, we can all feel good about that. Instead of merely raging against the system, perhaps we can let ourselves be filled with hope, for this woman, for all the women, for all of us whose silent screams previously went unheard.

I don’t know exactly why this case was the one that so forcefully changed the conversation. Maybe, this time, the facts were too appalling. Maybe we owe it to the superheroes on bicycles who could fill in some gaps that the victim could not. Or maybe this one woman’s voice was so ferocious, so powerful, that we not only heard her—we listened.

Regardless of the cause, and although some believe this was an incredible injustice, I believe it was incredible progress.

To most of us, the woman at the center of this still does not have a face or a name, which is fitting since Turner admitted he did not know her face or her name after he was arrested for trying to rape her. He assaulted an anonymous, vulnerable woman then discarded her like trash next to a dumpster while he fled. But his trash became our treasure. She didn’t need a name or a face to become the voice of everyone.

The woman whose name we don’t know concluded her victim statement by saying, “to girls everywhere, I am with you.”

She said, “[w]hen people doubt you or dismiss you, I am with you.”

She said, “I hope that by speaking today, you absorbed a small amount of light, a small knowing that you can’t be silenced, a small satisfaction that justice was served, a small assurance that we are getting somewhere.”

I am one of those girls. And I believe we just got somewhere.

Jules Barrueco is a lawyer and a writer in New York City. 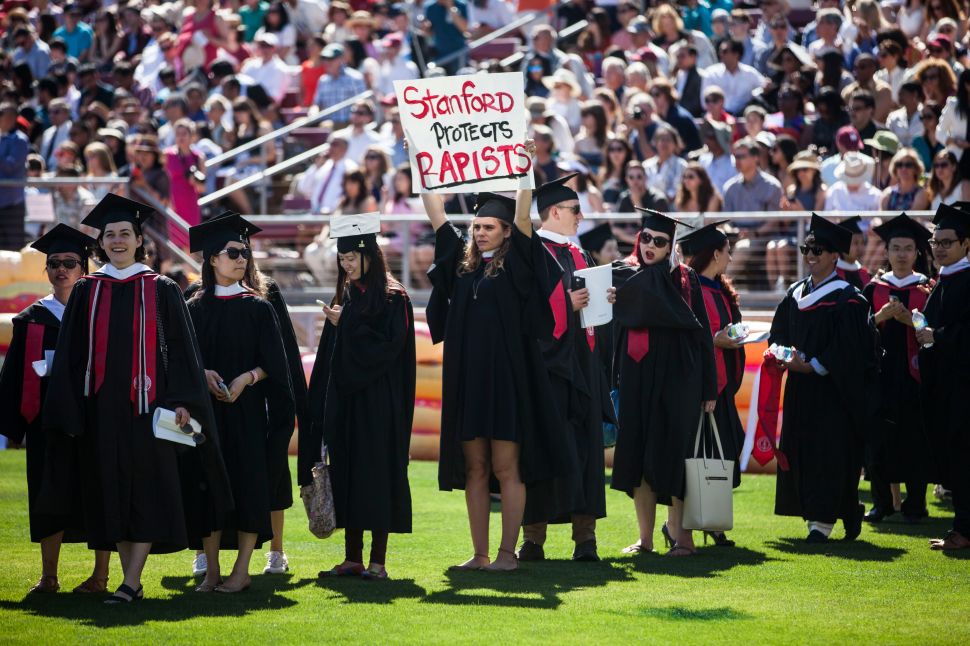